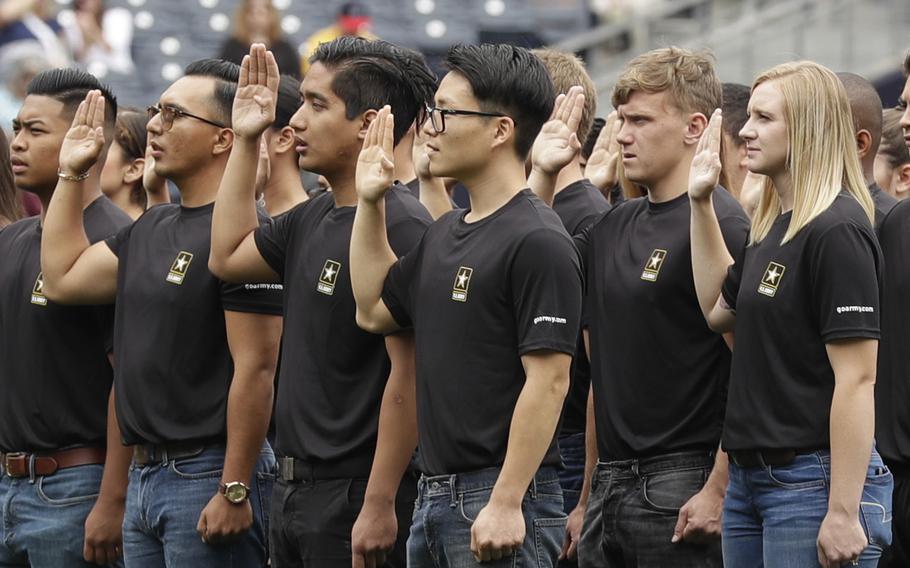 New Army recruits take part in a swearing in ceremony before a baseball game in San Diego on June 4, 2017. (Gregory Bull/AP)

WASHINGTON – The Army fell short of its recruiting goal for 2018, missing its mark for the first time since 2005 as it looks to grow its force strength in the face of growing threats from competing world powers such as Russia and China.

The Army has launched a large-scale review of its recruiting practices, senior service officials said Friday. The service will pour millions of dollars into revamping recruiting facilities and bolster its recruiting force after falling about 6,500 recruits short of its goal for fiscal year 2018, which will end Sept. 30. The Army had hoped to enlist 76,500 recruits in 2018, a goal that was lowered from 80,000 in April after more soldiers than expected elected to remain in the service.

Despite the shortfall, Maj. Gen. Joe Calloway, the Army’s military personnel management director, said the 70,000 recruits who did enlist this year is the most the service has attracted since 2010. He said the Army chose to focus on taking in high-quality recruits instead of ensuring it met its goal with borderline applicants.

Missing the recruiting goal “is not devastating,” Calloway said. “It still has an impact, because that is 6,500 soldiers that are not filling a critical specialty or a foxhole somewhere.”

He blamed the shortfall largely on a strengthening U.S. economy in which fewer potential recruits are looking for jobs. Nonetheless, the Air Force, Marine Corps and Navy all reached their recruiting goals for 2018, though they were less ambitious than the Army’s.

Only about 30 percent of 17- to 24-year-olds can meet the mandatory requirements for consideration for military service – a combination of physical, mental and background attributes. More so, only about 13 percent of that population is interested in military service, according to the Pentagon.

The shortfall comes as the Army looks to increase its active force from about 476,000 soldiers to about 500,000 by 2024, a number Pentagon officials have said is necessary if a major war with a near-peer adversary were to break out.

In the meantime, Army Gen. Stephen Townsend, the chief of Training and Doctrine Command, has been leading a complete review of how the service recruits potential soldiers, Calloway said. Townsend is slated to brief the Army Secretary Mark Esper on his findings next week, and the Army will look to implement changes quickly.

Calloway said some changes to recruiting efforts have already been implemented, including a new focus on reaching potential recruits through social media, interactive gaming, and in locations where recruiting has typically been weak such as major metropolitan areas.

Last year, the Army added about 500 recruiters to its ranks and intends to add another 500, said Marshall Williams, the Army’s principle deputy assistant secretary for manpower and reserve affairs.

The service has also poured more than $50 million into upgrading its recruiting facilities and recruiters’ internet service across the nation, recognizing that instead of reaching potential recruits or their parents by phone that they prefer to connect online, Calloway said.

“Secretary [Esper’s] guidance is we have to try new things, and if they don’t work, fine, move on to something else,” the general said. “But it’s not sitting around doing what we’ve always done. We have to do something different.”