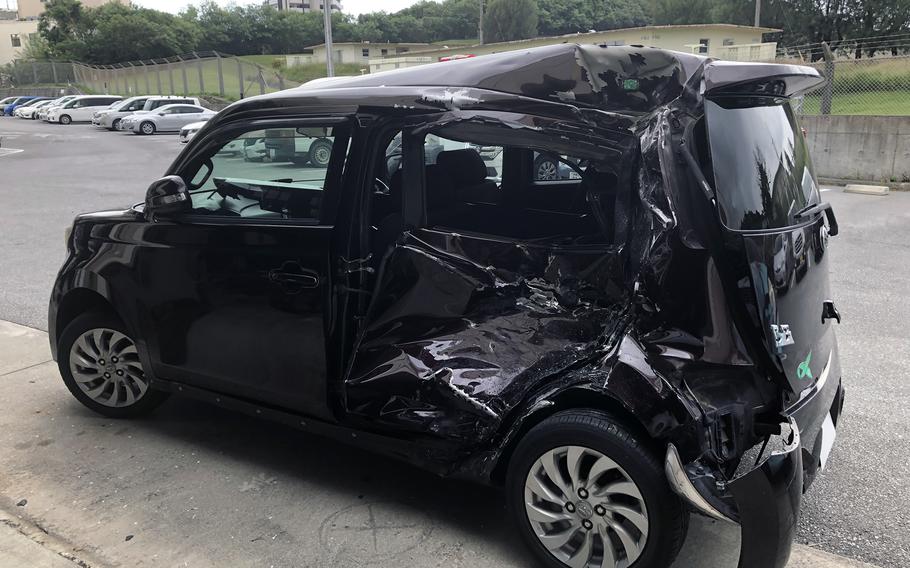 A Toyota bB involved in a fatal collision Nov. 4, 2022, sits outside the Okinawa city police station on Nov. 7, 2022. (Keishi Koja/Stars and Stripes)

CAMP FOSTER, Okinawa — A sergeant assigned to a Special Forces unit died Friday after his motorcycle crashed into a car at an intersection in Chatan town, Okinawa, according to Japanese police.

Army Sgt. Nathaniel Ballor, 25, assigned to 1st Battalion, 1st Special Forces Group (Airborne) at Torii Station in Yomitan, was northbound on Route 58 at 7:11 p.m. when his Suzuki collided at a controlled intersection in Sunabe with a Toyota bB, an Okinawa police spokesman told Stars and Stripes by phone Monday.

Ballor was pronounced dead at 8:05 p.m. at a local hospital, the spokesman said.

A native of Sterling Heights, Mich., Ballor “was a valued teammate, son, and brother. All of 1st Group mourns for him, his family, and friends,” group commander Col. Benjamin Jahn said in a statement emailed to Stars and Stripes on Monday. “He was a great friend and soldier who will be missed.”

The Toyota driver, Kazuaki Namizato, 67, was also treated at a local hospital but appeared uninjured, police said. Namizato was southbound when he turned right into the intersection and collided with Ballor, police said.

The spokesman declined to comment on the traffic light that controlled the intersection. He said police are checking dashcams from other vehicles at the scene as part of their investigation. Namizato is not in custody, the spokesman said.

Ballor enlisted in November 2017 and was designated as a wheeled vehicle mechanic, the Army said. He served with 5th Battalion, 73rd Cavalry Regiment and 3rd Brigade Combat Team, 82nd Airborne Division, with whom he deployed to Afghanistan from 2019 to 2020.

He arrived on Okinawa as the scheduled-maintenance noncommissioned-officer-in-charge, the Army said. Ballor’s awards include the Army Commendation Medal with one oak leaf cluster and the Army Achievement Medal with a C device for combat and six oak leaf clusters.

He is survived by his father, Christopher Ballor; mother, Melissa Spain; and half-brother Barrett Nelson, according to the Army.

Route 58 in Chatan has claimed several other motorcyclists in recent years.

A sailor and an airman were killed at the Ihei intersection in May 2017. A Marine was killed in June 2021 heading north in the Hamagawa area, again striking a southbound car making a right turn.

In May 2019, a civilian contractor at Camp Hansen struck and killed a 39-year-old Japanese motorcyclist when the contractor turned right at another Sunabe intersection and crossed the northbound lane.

This story has been updated to state that Army Sgt. Nathaniel Ballor was assigned to 1st Battalion, 1st Special Forces Group but was not a Green Beret.