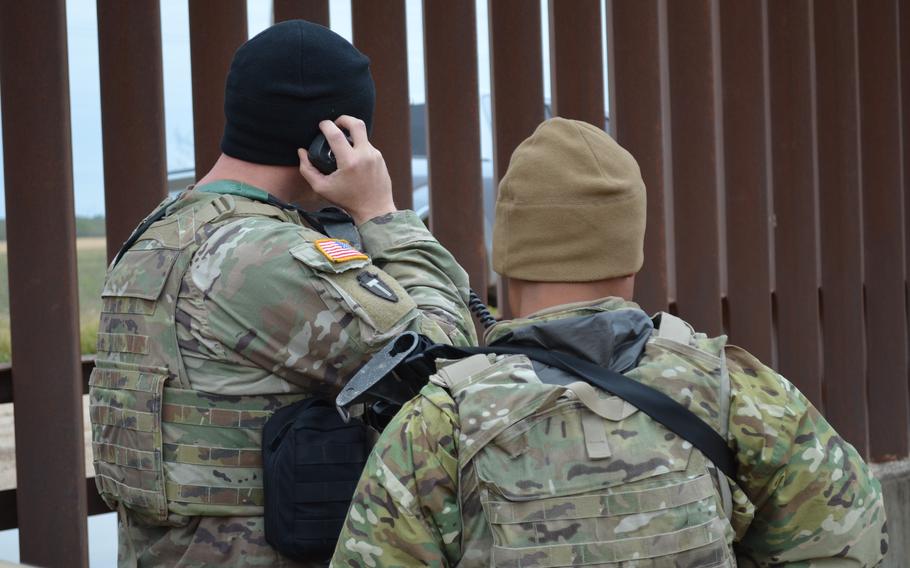 Two Texas National Guard soldiers work Jan. 21, 2022, at an observation post near the state’s border with Mexico as part of Operation Lone Star. The mission began in March 2021 with 500 troops and has surged to about 10,000. (Rose L. Thayer/Stars and Stripes)

AUSTIN, Texas — Gov. Greg Abbott approved nearly $500 million to fund the deployment of thousands of Texas National Guard troops to the state’s border with Mexico just days before the mission was set to run out of money.

Maj. Gen. Thomas Suelzer, commander of the Texas Military Department, told state lawmakers Wednesday that the state-sponsored border security mission is spending about $1.4 billion a year, which is more than was appropriated by the Texas Legislature.

Before the governor’s cash infusion Friday, Suelzer said the Texas Military Department only had enough money to make it to May 1. The Guard will now be able to support the deployment of nearly 10,000 troops through the end of August, which is the end of the fiscal year in Texas.

The Guard will then need an additional $1.4 billion to continue the work for another year, Suelzer said.

“This funding will address immediate border security needs while future funding needed to protect Texans continues to be evaluated,” according to Abbott’s office.

The border mission, known as Operation Lone Star, began in March 2021 and puts Texas National Guard troops along the state’s border with Mexico to stop criminal activity between the legal ports of entry. The service members have the authority to arrest and work closely with the Department of Public Safety.

About 6,100 troops work directly on the border while about 3,700 work in support roles throughout the state, Suelzer said Wednesday before a joint hearing of the state’s House committees for homeland security and public safety and defense and veterans' affairs.

Abbott and four other state officials approved the transfer, a total of $495.3 million, which includes about $30 million for other state agencies working the mission.

Texas has been using federal coronavirus relief funds to support Operation Lone Star indirectly. By backfilling public health and safety payrolls in other agencies with the federal funds, the governor can then redirect the money to the border security mission, Sarah Hicks, the governor’s director of budget and policy, said earlier this month during a hearing of the state’s Senate Committee on Border Security.

During Hicks’ testimony, she said the state had about $600 million in exchanges remaining, so Friday’s move was expected.

Suelzer also testified in the state Senate earlier this month, indicating he was looking at ways to reduce personnel on the deployment and cut costs. However, he said he won’t pull troops off the mission until he sees how a change in federal public health policy at the border impacts activity.

President Joe Biden announced he will end a pandemic-driven border policy known as Title 42, which allowed Border Patrol agents to send migrants back across the border quickly because of concerns they would spread the coronavirus. The policy is scheduled to end May 23.

Suelzer said Department of Homeland Security reports indicate the entire southwest U.S. border could see increase of up to 18,000 new migrants each day.

“This dramatic rise from the already high encounter rate of roughly 7,000 a day could be catastrophic to our south Texas communities,” he said.