More US troops deploy overseas in wake of Ukraine invasion 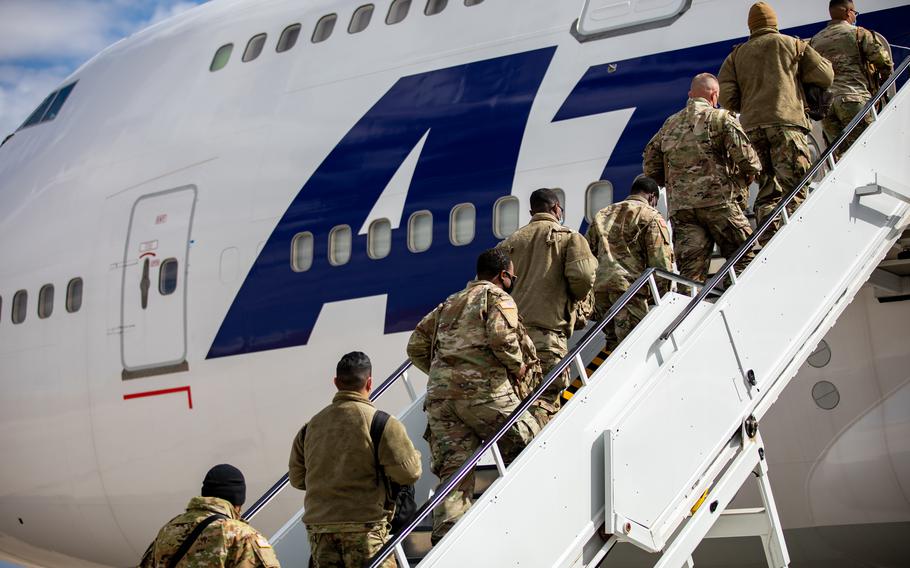 About 130 soldiers from the 87th Division Sustainment Support Battalion, 3rd Division Sustainment Brigade, lined up with rucksacks inside a terminal at Hunter Airfield in Savannah before marching outside and boarding their chartered flight. It departed amid grey skies and rain.

Republican U.S. Rep. Earl "Buddy" Carter, of Pooler, Georgia, was among those in attendance. He was seen "fist-bumping" many of the soldiers as they boarded the plane.

The battalion's soldiers are in addition to the estimated 3,800 soldiers from the Army's 3rd Infantry Division who have deployed in recent weeks from nearby Fort Stewart, said Lt. Col. Lindsey Elder, the division's spokesperson.

Spec. Danton Belucio, who has served in the Army for three years, said he looked forward to going on his first deployment.

"I've always wanted to actually go on one to do something different," he said. "It makes me feel like I'm helping somebody."

Maj. Gen. Charles Costanza, the 3rd Infantry's commander, said recently that soldiers are being told to prepare for six months overseas, though deployments could be lenghtened or shortened per developments in Ukraine.

The Pentagon has ordered roughly 12,000 total service members from various U.S. bases to Europe, with a couple of thousand more already stationed abroad shifting to other European countries.

The soldiers' mission is to train alongside military units of NATO allies in a display of force aimed at deterring further aggression by Russia. The Pentagon has stressed U.S. forces are not being deployed to fight in Ukraine.

Belucio, 24, of Orlando, Florida, said he was not worried at all about participating in the mission.