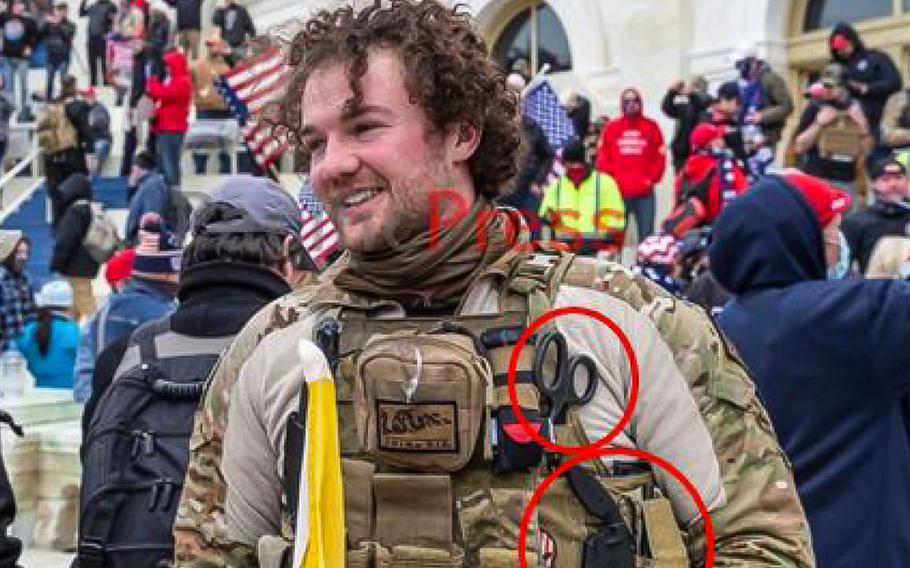 PITTSBURGH (Tribune News Service) — A federal judge on Friday ruled that a former teacher and ex-Army Ranger charged with 53 counts related to storming the U.S. Capitol on Jan. 6 and assaulting police will remain jailed pending trial.

Morss, a former substitute teacher and an Afghanistan combat veteran, is charged with multiple counts, including robbery and assault, related to storming the Capitol and battling with police.

In a motion for release, he and his lawyers maintain that he has been subjected to poor treatment in jail and cited his military service, his lack of criminal record, a pending job in the Washington area and an offer of a place to live with a fellow veteran as reasons to let him go.

The U.S. attorney's office opposed the request, saying Morss acted as a leader on Jan. 6 and repeatedly assaulted police officers trying to protect the Capitol.

"Every person who was present without authority in the Capitol on January 6 contributed to the chaos of that day and the danger posed to law enforcement, the United States Vice President, members of Congress, and the peaceful transfer of power," wrote Assistant U.S. Attorney Melissa Jackson. "However, Morss violently led that effort and thus his specific conduct aggravated that chaos and danger."

Jackson also said Morss has shown no regrets, citing a speech he wrote that agents found on his iCloud account. The speech is undated, but Morss labeled it "should I have to appeal before a judge what I am gonna say."

In the speech, he wrote, "You ask if I regret my involvement and what happened on the sixth my answer is (a) resounding no."

He goes on to denounce Congress, saying, "that capitol building isn't a temple at all it's a theater where soothsayers and charlatans strip the American people of their rights. We don't need Trump anymore. The people across the political spectrum and from sea to shining sea have woken up to the long train of abuses that this twisted body of government has done."

Jackson said the speech "makes it unequivocally clear that he does not renounce" what he did on Jan. 6.

She said Morss' conduct during the riot and since shows that he's a threat and should remain locked up.

"In short, Morss came prepared for violence and then repeatedly led the violent mob attacking law enforcement in an effort to overtake the Capitol," she said. "His actions inherently prove he is a danger to the community at large, and the law enforcement officers who stand in the way of his ideological beliefs, whose safety can only be assured by his detention."

Morss, 28, grew up in Nevada and joined the Army at 17, serving three tours in Afghanistan as a Ranger. His family said he won commendations and was honorably discharged after four years.

After visiting an Army friend from Pennsylvania, he decided to attend Penn State to study history and become a teacher, according to his parents.

He graduated in 2020 and got a job as a substitue in the Shaler district, teaching for about five months.