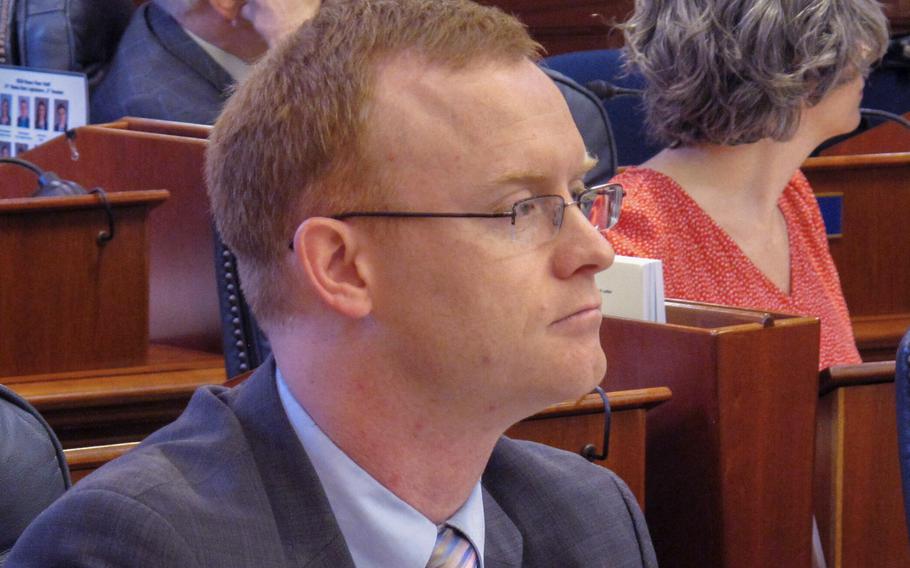 Alaska Rep. David Eastman sits at his desk on the Alaska House floor in Juneau, Alaska, on March 5, 2020. (Becky Bohrer/AP)

ANCHORAGE, Alaska — Dozens of West Point graduates have demanded state Rep. David Eastman resign from office over his ties to Oath Keepers group, saying his affiliation has betrayed the values of the U.S. Military Academy he attended.

A letter signed by 69 fellow West Point graduates was published in the Mat-Su Valley Frontiersman and called on Eastman to resign after his membership in the Oath Keepers became public, with another name added after publication. Eastman had previously confirmed to the Anchorage Daily News that he became a member of the organization shortly after it formed more than a decade ago.

"We give it as our fixed opinion that, as a serving member of the Alaska State Legislature who has repeatedly emphasized your status as a veteran and a graduate, you have discredited yourself and betrayed the values of West Point," the letter said. "We call on you to do the honorable thing and resign from office."

Ivan Hodes, a West Point graduate living in Anchorage, authored the letter. He served in the same military police battalion at Fort Richardson in Anchorage as Eastman.

"I thought that the decent thing to do would be to offer an opportunity for resignation," Hodes told the Anchorage Daily News.

Hodes said he reached out to other West Point graduates because he was concerned Eastman, a Republican from Wasilla, was violating his duties as a legislator.

"It's serving two masters," Hodes said. "You can't be loyal to the U.S. government and the government of Alaska and at the same time belong to this militia."

Several members of Oath Keepers have been charged with crimes connected to the riot at the U.S. Capitol on Jan. 6. Eastman said he went to Washington that day to object to the Electoral College votes of several states confirming President Joe Biden's election but didn't participate in the demonstrations.

Hodes said he views the group and Eastman's insistence that the current federal government is illegitimate as directly clashing with his responsibilities to uphold state and federal laws.

"I find it a very good thing that as Americans we have the right to choose our own elected representatives, rather than those outside Alaska and outside the Mat-Su choosing our elected representatives for us based on their values and what passes for journalism in some parts of the country," Eastman said in a email to The Associated Press on Tuesday.

"We can be sure of one thing today: If we do not raise our voices in support of the Constitution and the values that we hold dear, someone else will gladly speak for us on behalf of whatever values are dear to them," Eastman said.

Eastman took office in 2017 and at times alienated himself from fellow Republicans in the state House over sometimes divisive statements.

He was disinvited from events sponsored by the West Point Society of Alaska after he drew a comparison between Biden and Adolph Hitler in September, and posted a link on social media leading to a Holocaust denial site, the Daily News reported.

Another person who signed the letter was Justin Raphael of Washington state, who was in the same graduating class as Eastman at West Point.

"His participation, anybody's participation (in the Oath Keepers) is just utterly counter what being a graduate of the U.S. Military Academy is supposed to be about. It's supposed to be about upholding the Constitution and the constitutional process. Not a violent usurpation of that process," Raphael said. "The fact that he's a lawmaker, even in a state capacity, is deserving of rebuke."

Hodes at least hopes the letter will take away the option of Eastman claiming "the mantle of West Point" in his reelection campaign.

"I can't guarantee that it will do any good, but we can't do nothing," Hodes said. "The reputation of the Academy is at stake."