Army worried about rise in gambling 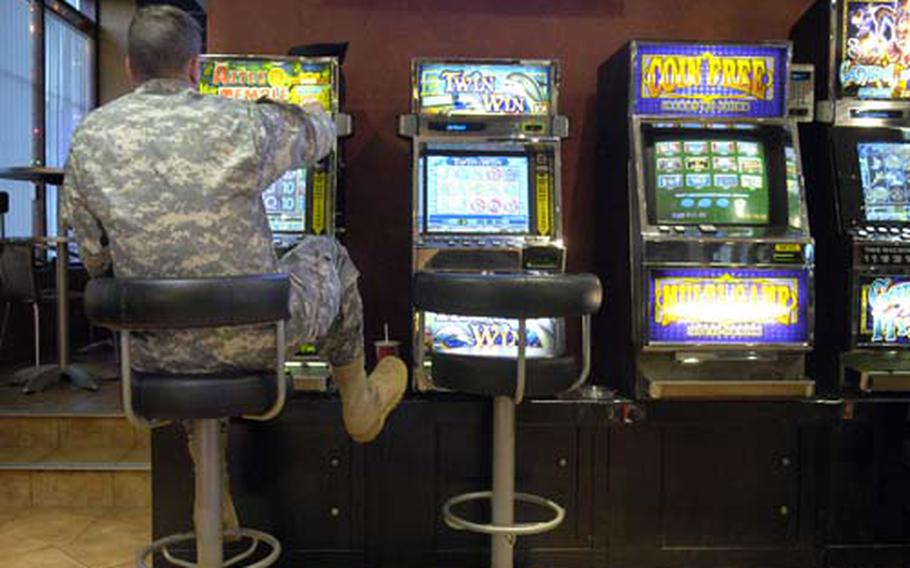 A soldier tries his luck at a slot machine at an Army base in Germany. The U.S. Army Garrison Grafenwöhr commander says that use in slot machines has increased at his bases since 172nd Infantry Brigade soldiers returned from Iraq late last year. (Ben Bloker / S&S)

A soldier tries his luck at a slot machine at an Army base in Germany. The U.S. Army Garrison Grafenwöhr commander says that use in slot machines has increased at his bases since 172nd Infantry Brigade soldiers returned from Iraq late last year. (Ben Bloker / S&S) Gambling is a popular form of recreation for soldiers and family members at U.S. bases in Germany. (Seth Robson / S&S)

VILSECK, Germany &#8212; An increase in gambling at U.S. Army Garrison Grafenw&#246;hr suggests that some 172nd Infantry Brigade soldiers and families members could develop gambling addictions related to stressful deployments, according to a top Army official in the area.

While not providing financial data to support his assertion, garrison commander Col. Nils "Chris" Sorenson recently told a group of soldiers that more money is being put into the on-post slot machines.

The garrison is home to more than 20,000 soldiers and family members.

Sorenson, a former Green Beret, suggested some soldiers develop gambling addiction after returning from a stressful deployment, and some wives of deployed soldiers use gambling as a way to cope while their husband is away.

"It is a stress release, and then it becomes addictive," he said in an interview with Stars and Stripes. "Then credit cards go dry. Soldiers come back from downrange and there is no money."

Annual revenue from on-post slot machines at USAG Grafenw&#246;hr increased to $251,011 in fiscal 2008 from $195,887 in fiscal 2007, according to William Bradner, the Family and Morale, Welfare and Recreation deputy public affairs officer. Some of the increase, however, can be attributed to an influx of thousands of 172nd Infantry Brigade families last summer. MWR did not provide data for the current financial year, which has seen the return of thousands of 2nd Cavalry soldiers to Vilseck from a 15-month deployment to Iraq.

"Gambling can be a symptom of the deployment and pressures on families," said Dr. David Brown, a clinical psychologist based at Vilseck since March 2007. "Gambling is typically a symptom that we see amongst other things."

Brown said only a few people in the garrison are being treated exclusively for gambling addiction, but excessive gambling can be one of a range of problems experienced by soldiers returning from combat.

Members of the military are usually high functioning individuals without mental health issues prior to deployment.

"At the same time, these people have high demands placed on them," he said.

USAG Grafenw&#246;hr has boosted its mental health staff from a handful when Brown arrived, to seven psychologists and five to six psychiatrists. The mental health providers treat conditions ranging from depression and anxiety to sleep disorders, anger problems and compulsive behavior, he said.

Sometimes gambling can be a spouse&#8217;s way of coping with a soldier&#8217;s deployment, he said.

"Say if you are active duty and deploy &#8212; for some spouses gambling might be an outlet. Others might meet with friends or go to the gym," he said.

A spouse with gambling problems can take away a soldier&#8217;s focus from the mission downrange, he said.

Gambling addiction is treated through a range of psychological techniques that can involve having a patient look at ink blots and complete sentences to determine their personality type, then talking to find out what is going on in their life and where they feel stuck, he said.

Despite gambling&#8217;s adverse impact on some people, it is not a problem for most, he said.