Irene Gilliand, standing, coach of the U.S. Army Women&#39;s Dragon Boat Team, guides her team&#39;s boat during a pratice his past weekend at Tomari Port. Gilliand, 41, is a substitute teacher for DODDS on Okinawa and has coached the team for the past three years. (David Allen / S&S)

Irene Gilliand, standing, coach of the U.S. Army Women&#39;s Dragon Boat Team, guides her team&#39;s boat during a pratice his past weekend at Tomari Port. Gilliand, 41, is a substitute teacher for DODDS on Okinawa and has coached the team for the past three years. (David Allen / S&S) 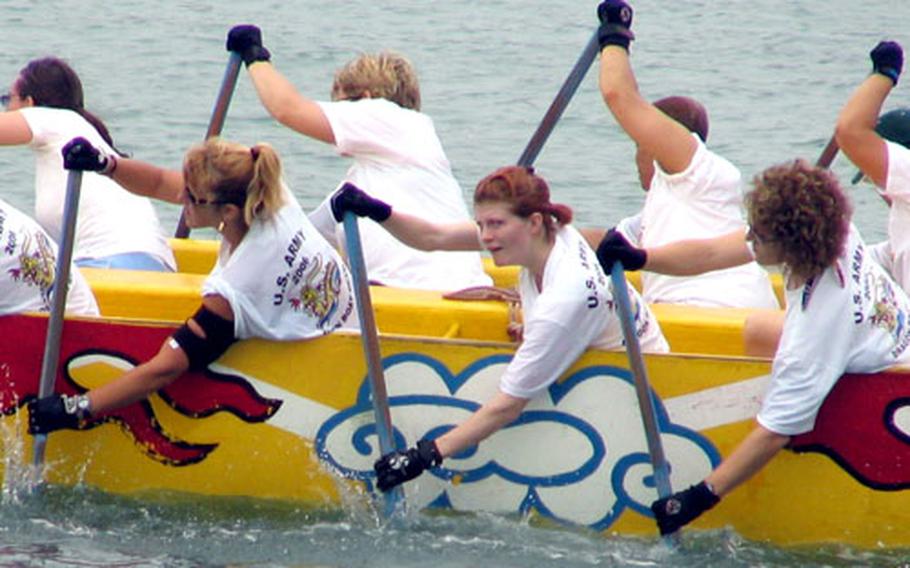 Members of the U.S. Army&#39;s Women&#39;s Dragon Boat Team drive deep during a practice session this past weekend at Tomari Port in Naha. The team placed first in the womens&#39; group the past two years. (David Allen / S&S)

The women are confident they&#8217;re ready to win their third title in a row at this year&#8217;s Naha Hari, or dragon boat races.

&#8220;We had a great practice today,&#8221; Irene Gilliand, 41, said Saturday after the team&#8217;s 32 women rowers clambered ashore from their bright yellow, 50-foot-long boat. Most of their T-shirts were soaked through after the grueling hour-long session.

&#8220;This was our first day in the water and they did great,&#8221; said Gilliand, a substitute schoolteacher who has coached the team for the past three years.

What began centuries ago as a fishermen&#8217;s festival now has become a time for enjoying the Okinawa sun, feasting and enjoying the sights and sounds of colorful two-ton sabani boats with prows carved into fierce dragon heads, racing each other in the commercial port.

The Naha race is the first of several dragon boat races held on Okinawa through the spring and summer. The free event, part of a three-day festival during Golden Week, typically draws 150,000 people.

According to tradition, the races date from the 14th century, when Naha was the hub of the seafaring Ryukyu Kingdom and the races were part of a ceremony to give thanks to the sea god and pray for the safety and prosperity of fishermen.

Now the Golden Week race festival in Naha is marked by plenty of live entertainment, food, beer, game booths and strange-costumed folks dressed in scary masks, who march through the crowd beating drums and trying to make people laugh.

Thousands of people come out to cheer their favorite village, school or business teams. The end of each night is punctuated by a spectacular fireworks display.

Gilliand said the Torii women&#8217;s team is made up of active-duty soldiers, teachers, spouses and retirees. The women began training three months ago, meeting every Tuesday and Thursday to build up their endurance and learn how to row in cadence. Just before race day, each team is allowed to actually get in the water a few times on one of the three large dragon boats at the Tomari Port to put their training into practice.

Meadows was looking forward to her first race.

To watch the Naha Hari, or dragon boat races, drive along Highway 58 south from Kadena Air Base or Camp Foster. After passing Camp Kinser on your right, proceed until you reach the Tomari Intersection. (There&#8217;ll be a big green sign in Japanese and English to alert you.)

Turn right and follow the road until it hits a T-section. Turn right again there. Within a few minutes&#8217; drive, you will begin to see a festival site on your left where the dragon boat races will take place.