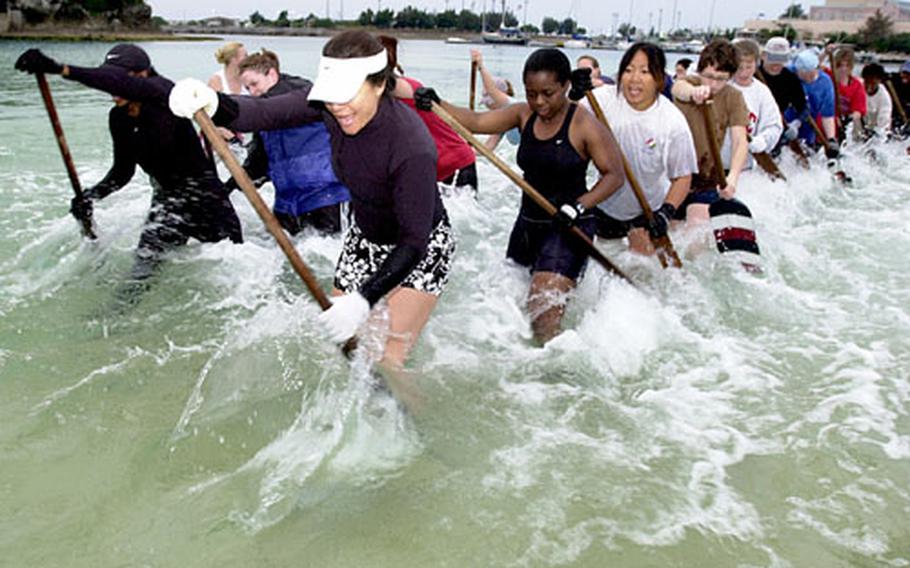 The Navy Women&#39;s Dragon Boat Team runs through a speed drill Friday morning in the shallow water at Kadena Marina. This is mostly a new team, but "that&#39;s good because there are no bad habits," said Gunnery Sgt. Joy Craig, team captain. The Navy team "is here to win," she said. Army has won the event four years in a row, though. (Cindy Fisher / S&S)

KADENA AIR BASE, Okinawa &#8212; The women of Torii Station are once again the ones to beat at this year&#8217;s dragon boat race.

The Army Women&#8217;s Team is looking to bring home the gold for the fourth year in a row against other military women&#8217;s teams at the Naha Hari festival Saturday at Tamari Port in Naha.

Rain or shine, the team has been practicing twice a week since February.

And it does get hard.

During practices, Gillian often has her team row 10- to 15-minutes straight; she also pushes them through speed drills to build their endurance and teamwork.

Engelmann and teammates say they are confident they&#8217;ll win again this year. But some other teams are determined to break that streak.

The Navy team is another one to watch out for, said team captain Gunnery Sgt. Joy Craig.

Teamwork may be a little more difficult for the Camp Foster Single Marine Program women&#8217;s team, which had its first practice Saturday.

It&#8217;s the only women&#8217;s team comprised entirely of active-duty personnel, said Kim Newberry, a SMP coordinator. It&#8217;s difficult for the active-duty members to practice because their work missions come first, she said.

But, she said, &#8220;It just shows how much heart the Marine teams have that they do as well as they do with so little practice time.&#8221;

How to get there: From Kadena Air Base or Camp Foster, take Highway 58 south. After passing Camp Kinser on the right, proceed to the Tomari Intersection, which is marked by a sign in English and Japanese. Turn right and continue along that road until you hit a T-intersection. Turn right again. From there you should soon see the festival site on your left.