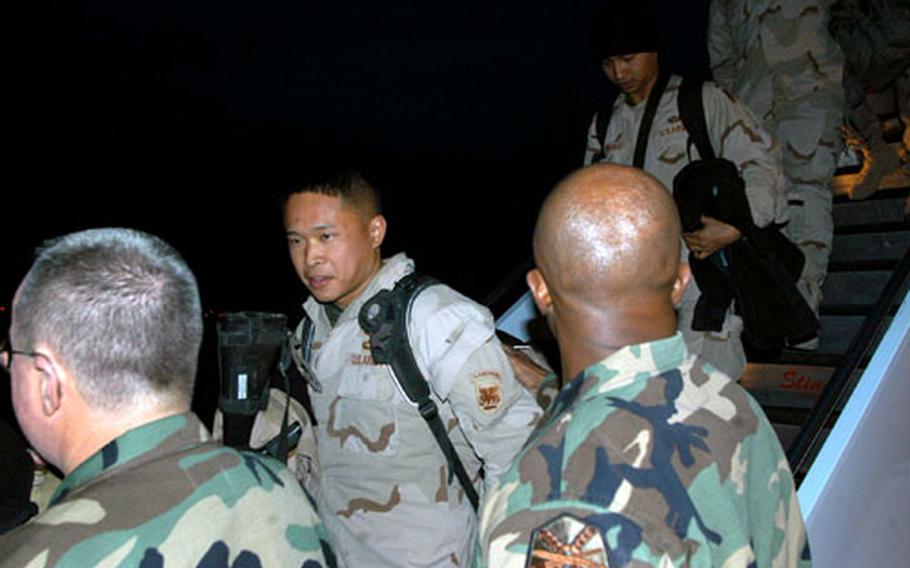 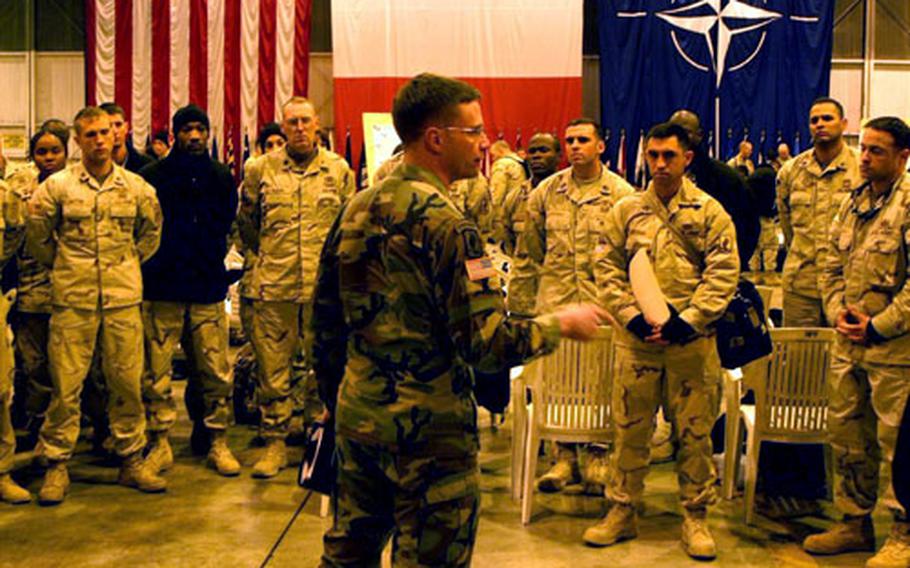 Lt. Col. Mike Shinners, the rear detachment commander for the 173rd Airborne Brigade, talks to a group of Sky Soldiers who returned to Italy on Friday evening. It was the first large return of personnel from Afghanistan; most of the Southern European Task Force (Airborne) will be returning over the next few months. (Kent Harris / S&S)

AVIANO AIR BASE, Italy &#8212; Nobody knelt down to kiss the runway &#8212; most were probably saving their lips for upcoming family reunions a few hours later.

There were, however, plenty of tired smiles in evidence as the first large group of Vicenza-based soldiers returned to Italy on Friday from almost a year in Afghanistan.

Most soldiers based in Vicenza &#8212; and thousands of others based in Germany who have served in Combined Joint Task Force-76 &#8212; will be returning to Europe in the next few months. About 100 soldiers landed in Italy on Friday as an advance team. They flew in from Manas, Kyrgyzstan &#8212; where temperatures were below freezing &#8212; and stopped at Incirlik Air Base in Turkey before touching down in Aviano.

He, too, was looking forward to a reunion with his wife, Paola, and their 4-month-old daughter, Melanie.

Lt. Col. Mike Shinners, the rear detachment commander for the 173rd Airborne Brigade, said the returning soldiers would go through seven days of reintegration starting Sunday. Then, he said, most of them will go on block leave for 30 days.

Most of the arriving troops didn&#8217;t appear to be thinking that far ahead.

Staff Sgt. Tywan Jackson said he&#8217;d call his family back in Miami to let them know he was back in Vicenza. And he&#8217;d get some of the dust off &#8212; literally and figuratively.

Maj. Gen. David Zabecki, rear detachment commander for the Southern European Task Force (Airborne), which includes the Vicenza soldiers, Brig. Gen. Robert Yates, the 31st Fighter Wing commander, and Col. Virgil Williams, the U.S. Army Garrison-Vicenza commander, greeted the soldiers before they even got off the plane. The various commands&#8217; top enlisted servicemembers and others were waiting at the bottom of the steps.

A few minutes earlier, Zabecki had publicly thanked the Italian base commander, Col. Roberto Sardo, and Yates for their help in getting the Vicenza soldiers in and out of the theater.

Shinners was one of dozens of soldiers in the rear detachment who traveled to Aviano. Family members waited in Vicenza.