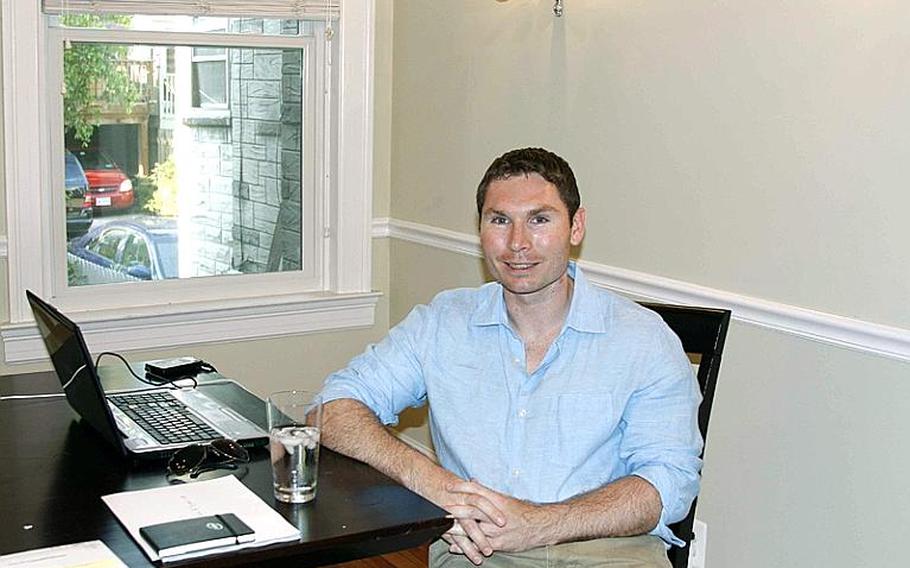 Blake Hall, 28, talks about Troopswap, the company he founded with fellow Army veteran Matthew Thompson. The company?s headquarters in a Washington townhouse doubles as home for Hall, Thompson and several other employees. (Bill Murphy Jr./Stars and Stripe)

Blake Hall, 28, talks about Troopswap, the company he founded with fellow Army veteran Matthew Thompson. The company?s headquarters in a Washington townhouse doubles as home for Hall, Thompson and several other employees. (Bill Murphy Jr./Stars and Stripe) 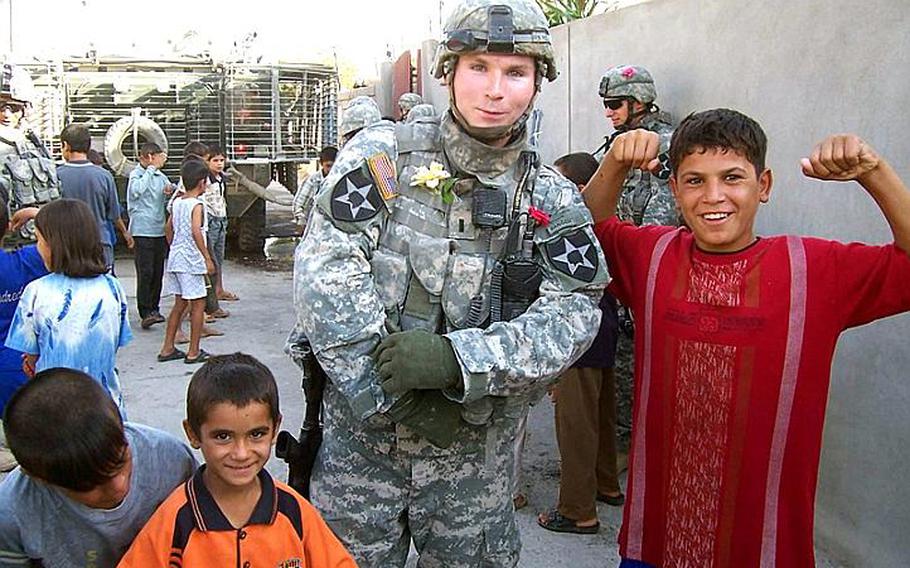 Then-Army 1st Lt. Blake Hall poses with Iraqi children in Mosul in October 2006. After leaving the military and graduating from Harvard Business School, Hall cofounded Troopswap, a Washington-based company that offers daily deals to members of the military community. (Courtesy of Blake Hall) 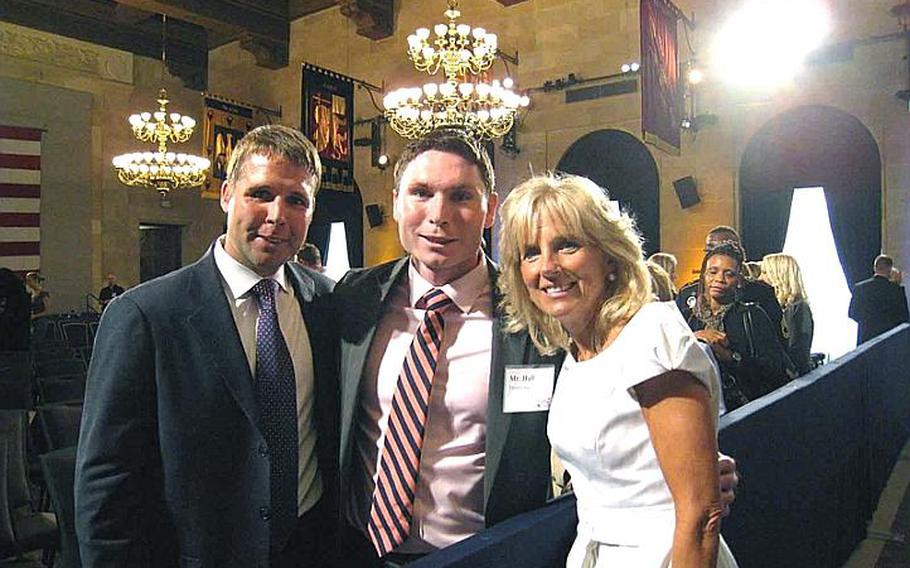 Matthew Thompson, left, and Blake Hall, Army veterans and founders of Troopswap, pose with second lady Jill Biden at a June 29 event at the U.S. Chamber of Commerce in Washington. (Courtesy of Blake Hall) 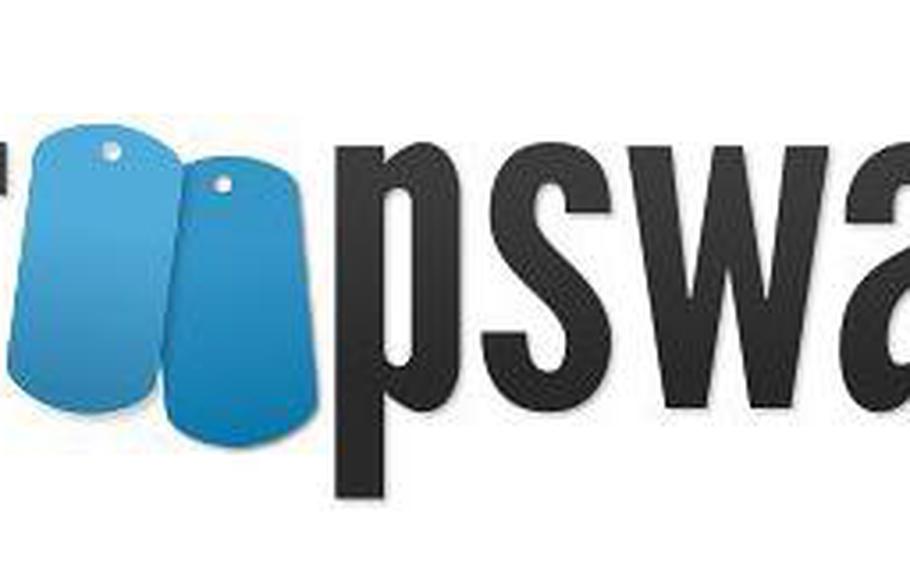 WASHINGTON &mdash; A small team of Army veterans hopes to change the way the military community buys just about everything.

Working out of a nondescript townhouse in a trendy area of Washington, the soldiers-turned-entrepreneurs recently launched Troopswap, a Groupon-style daily deal website for the military. They announced late last month that they&rsquo;ve raised $1 million to expand operations, but the townhouse still doubles as home for the company&rsquo;s founders and some of its other employees.

&ldquo;The setup is a bit like &lsquo;The Social Network,&rsquo; if you&rsquo;ve seen that movie &mdash; minus the zip line, of course,&rdquo; said CEO Blake Hall, 28, a former infantry platoon leader who served in Iraq from 2006 to 2007. &ldquo;Every room is filled with a Troopswap employee. My girlfriend is thrilled.&rdquo;

Hall and co-founder Matt Thompson, 31, who served four tours in Iraq and Afghanistan with the 2nd Battalion, 75th Ranger Regiment, met while attending Harvard Business School after leaving the military. They dreamed up the idea for their company in summer 2009 and worked on it first as a yearlong academic project.

Troopswap launched in May and is initially active only in the Hampton Roads, Va., area, where it employs 13 military spouses, but the company plans to expand to Washington and San Diego next month and other military markets soon thereafter.

Signing up for the free Troopswap service provides members with a stream of discounts from merchants who want to reach military customers. Offerings are varied &mdash; everything from an hourlong massage ($20, normally $55) to tandem parachute jumps ($139, normally $239).

Membership is limited to servicemembers, veterans or members of military families who prove their status by signing up with a .mil email address, providing a USAA member number or calling and explaining their affiliation to one of the company&rsquo;s customer service representatives.

While researching the idea, Hall and Thompson said they interviewed about 1,000 military spouses and surveyed another 3,000 before getting too deep into their business plan.

So, what advice would Hall and Thompson have for other veterans who hope to go into business for themselves?

&ldquo;Finding a mentor is incredibly important,&rdquo; Hall said. &ldquo;Everything about businesses is about selling ... but the first thing to do is to sell somebody who has experience in your [business] space and a phenomenal reputation who can mentor you through.&rdquo;

For Hall, he said, that person was Kelly Perdew, a West Point alumnus and former infantry officer who won the second season of the &ldquo;The Apprentice.&rdquo; Perdew now serves on Troopswap&rsquo;s board of directors.

Second, Hall said: &ldquo;Entrepreneurship is just like combat &mdash; you must plan to fail. Every success story is marked by multiple small failures. The companies that make it learn from failure and adapt.&rdquo;

Finally, success in business depends on the adage: It&rsquo;s not who you know, it&rsquo;s who you get to know.

&ldquo;You have to get lucky by reaching out to or meeting the right contact at the right time,&rdquo; Hall said. &ldquo;You can create your own luck by getting out and meeting people in your industry.&rdquo;

The whole thing is rewarding, Hall said, but difficult.