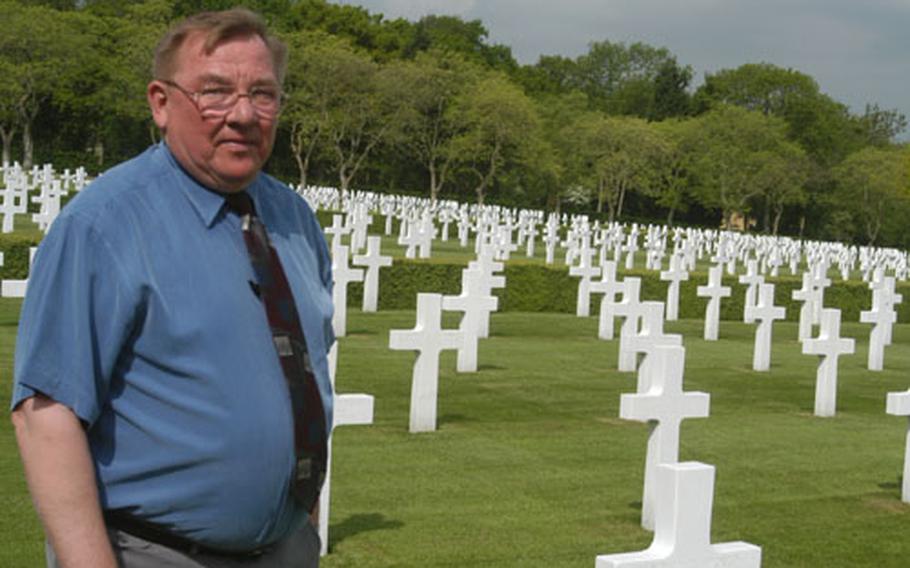 Memorial Day is the biggest day of the year for Jim Schoenecker. He is superintendent of the Cambridge American Cemetery in England, where more than 3,800 Americans are buried. (Ron Jensen / S&S)

MADINGLEY, England &#8212; The biggest day on Jim Schoenecker&#8217;s calendar has arrived. For him, Memorial Day is the pinnacle of his year, the day that makes the other 364 worthwhile.

Schoenecker is superintendent of the Cambridge American Cemetery at Madingley, England, just a few miles west of Cambridge. In his care are the graves of more than 3,800 of America&#8217;s dead from World War II, men &#8212; and a few women &#8212; who sacrificed all for a country they would never again see.

The cemetery, like more than 20 others throughout Europe holding American dead from both world wars, is managed by the American Battle Monuments Commission, which has offices in Paris and Rome, as well as headquarters in Washington, D.C.

Schoenecker, 63, became part of the commission in 1981 and worked at four cemeteries in France and one in the Netherlands before moving to Cambridge in 1990.

He takes pride in caring for the final resting places of people he calls heroes.

The best days, he said, are when the next of kin of someone buried at the cemetery arrives, especially those visiting for the first time. They are presented with information about the cemetery and escorted to the grave of their relative, where they are photographed by a staff member.

Following each war, family members of the dead were given a choice of returning the remains of their loved ones to America or leaving them in European soil, sleeping the eternal sleep alongside their fallen comrades.

The visits, Schoenecker said, help families come to grips with the decision.

The son of a coal miner from Pittsburgh, Schoenecker joined the U.S. Army and was soon sent to France. He was there when French president Charles de Gaulle invited the U.S. military to leave the country it had liberated from Nazi Germany barely 20 years earlier.

Schoenecker was at a U.S. base near Verdun, France, when Old Glory was lowered for the final time in 1966.

Schoenecker had met and married a French girl, Chris. He left the service and worked for a French firm selling poultry to farmers. They had three sons: William and Patrick still serve in the French army, Mark is a veteran of the French Foreign Legion.

In 1981, Schoenecker was hired by the ABMC, boosted, in part, by his ability with the French language.

One year after moving to Cambridge in 1990, Chris Schoenecker passed away. Jim has since remarried.

Schoenecker has been assisted at the cemetery for two years by Frank Kaufmann, who worked at a cemetery in Manila, the Philippines, before moving to England.

Kaufmann noted Schoenecker&#8217;s knowledge of the bomb groups and fighter squadrons whose members are buried in the cemetery. When their aged comrades return to visit the graves, Schoenecker is an informed and courteous host.

There&#8217;s more to running an ABMC cemetery than just conducting a ceremony on Memorial Day and welcoming visitors.

The superintendent and assistant must be versed in subjects as diverse as masonry and plant biology, mechanics and ceremonial protocol. The grounds of the Cambridge cemetery contain 50 different species of trees, each with its own peculiarities regarding care.

A variety of hedges and flowers make the place seem more like a park suitable for a picnic than a resting place for the dead. Schoenecker said the ABMC has set strict standards for the appearance of the cemeteries.

Schoenecker easily explained what attracted him to the job and what keeps him going.