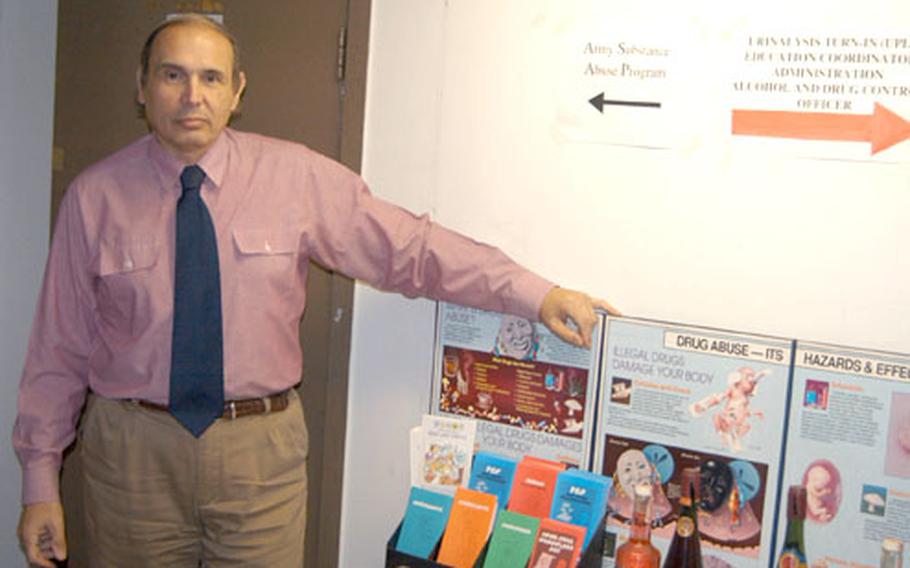 The rate of referrals for alcohol problems among the 10,000 mostly 2nd Infantry Division troops serving in Area I is three times the Army average. One in 15 soldiers serving here is referred for alcohol counseling, compared to one in 45 soldiers in the Army, Silvia said.

Statistics collected by the National Institute on Alcohol and Alcohol Abuse indicate that alcohol-related accidents, injuries, sexual assaults, apprehensions and deaths increase significantly in the period from Thanksgiving to New Year&#8217;s. The increase is most pronounced among 17- to 30-year-olds, Silvia said.

&#8220;Soldiers do drink more during the holidays, partly because they have more free time and partly because our society makes a strong association between holiday celebrations and heavy drinking,&#8221; Silvia said. &#8220;The message I&#8217;d want to give people is that if you give yourself permission to drink more than you should during the holidays, that doesn&#8217;t mean the world is going to give you permission not to experience the consequences.&#8221;

Area I drug and alcohol education director Mike Gallagher said alcohol abuse is a significant problem in Area I every day of the year.

The division is sensitive to the issue, said 2nd ID spokeswoman Capt. Catina Barnes. It maintains year-round alcohol education and awareness programs for soldiers. And, she said, &#8220;During the holiday season they emphasize alcohol issues and how it relates to the fact that soldiers have more free time.&#8221;

Morale, Welfare and Recreation offers many activities to help soldiers kill time during the holidays without resorting to alcohol, Barnes said.

&#8220;There is a holiday guide with an abundance of events for soldiers to participate in &#8230; (including) entertainment activities that get them out instead of sitting in their rooms feeling like drinking.&#8221;

Such efforts, however, must combat the range of factors contributing to heavy drinking in Area I, Silvia said.

&#8220;People are separated from their supports &#8212; their family, their car, the mall, their church. They are physically far away. They start living in very small spaces. The options in their lives are very small. For a lot of guys it is: Go to work, go to the liquor store, go to your room and drink,&#8221; he said.

South Korea&#8217;s reputation as a place where soldiers drink hard is another factor, he said.

The reputation has been cemented by rituals such as the Thunder Run, where new soldiers attempt to drink at every club in the Ville in Tongduchon, or kettle drinking, in which all members of a group of soldiers pour their favorite drink into a kettle and everybody drinks from it, he said.

Alcohol pushes some people over the edge, Silvia said.

&#8220;We have had murders and negligent homicides. We have soldiers sitting in Korean prisons now for crimes they committed while they were drunk,&#8221; he said.

Of the 855 soldiers referred for counseling in Area I in the past year, 420 were referred after being detained by MPs or treated by doctors for injuries sustained in drinking accidents. Another 415 soldiers checked in voluntarily or were referred by commanders. The remaining 20 were seen as the result of positive results on drug tests, Silvia said.

Soldiers with drinking problems also can hurt their careers and harm their units&#8217; well-being, he said: &#8220;If you have 15 soldiers in a unit arrested for alcohol-related misconduct, that has an impact on morale.&#8221;

&#8220;If a person comes in here from the blotter or the emergency room there are probably one or two people in his chain of command who knew he had a problem. Very rarely do we have a guy come in here with a serious incident and it is a surprise,&#8221; he said.

Often alcohol problems appear toward the end of a soldier&#8217;s time in South Korea, he said.

Of the 855 soldiers treated for alcohol problems in Area I in the past year, 147 were referred during their last month in country, he said.

Soldiers referred for alcohol counseling are screened to gauge the extent of their problem, Silvia said. Most take a one-day class to help them avoid future problems with alcohol. Others attend outpatient-counseling classes. The worst cases, about 50 soldiers a year, are sent to hospital for treatment of alcohol dependency, he said.

One recovering 2nd ID alcoholic, who asked not to be named, said joining the Army helped her overcome her own problems with drinking.

Before joining the Army, she was drinking four bottles of wine or 20 bottles of beer a day, she said. The drinking problem led to her getting fired from numerous jobs, racking up huge debts and eventually winding up in the hospital to have her stomach pumped, she said.

After she joined Alcoholics Anonymous, she became sober and eventually joined the Army to pay off $10,000 in debts from her drinking days.

In South Korea she sees many soldiers making the same mistakes she made when she was drinking, she said.

The curfew imposed on 2nd ID soldiers was a major contributor to drinking, she said.

The 2nd ID could cut its drinking problem by giving soldiers more freedom, she added.

&#8220;I think they should get rid of the curfew and the battle buddy thing and just give people their freedom. If people had more freedom I don&#8217;t think they would be as miserable here. If people could just go off post and enjoy their time off they would not feel the need to get so drunk,&#8221; she said.

But there is evidence of progress, Silvia said. The drinking age for soldiers serving in South Korea was raised from 18 to 20 in 1996 after five soldiers aged 20 or younger died in drinking accidents, including an 18-year-old found dead in his bed with a blood-alcohol level of 0.44. The drinking age was raised again last month, to 21.

&#8220;Things are better to the extent that while we still have serious problems, the tolerance of those problems is not as great. The percentage of referrals we are getting where there are serious crimes or serious injuries has diminished,&#8221; he said.

Of the 650 blotter referrals in 1990, 300 involved violent crimes. In the past year, of 420 alcohol-related MP and emergency room incidents, just 92 involved crimes of violence, Silvia said.