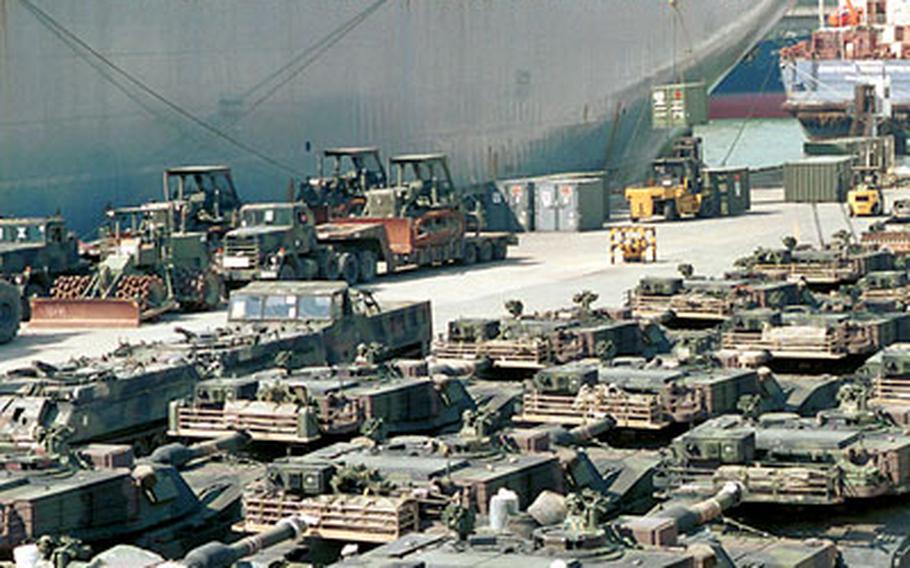 M1A1 Abrams tanks and other military hardware of the 2nd Infantry Division’s 2nd Brigade Combat Team await shipment on a military pier in Pusan Harbor, South Korea, last July to the Middle East. The U.S. military in South Korea has recently upgraded its Abrams tank force to a newer version called the AIM, part of its commitment to South Korea to spend $11 billion to upgrade U.S. forces on the Korean Peninsula. (Cho Pong-sung / Courtesy of U.S. Army)

PYONGTAEK, South Korea &#8212; The U.S. Army in South Korea has upgraded its Abrams tank force to a new variant that makes the tanks safer to use, easier to maintain and better able to survive combat.

About 90 of its M1A1 Abrams tanks have been converted to the AIM, or Abrams Integrated Management, variant.

Meanwhile, the Army recently finished shipping 30 additional M1A1 Abrams tanks out of South Korea to the United States, where they, too, will be upgraded to the AIM version, then returned to South Korea.

All the tanks are assigned to the 2nd Infantry Division, part of the 8th U.S. Army in Korea.

The tank force upgrade comes as part of the U.S. military&#8217;s commitment to South Korea to spend $11 billion in upgrades and enhancements to U.S. forces in the country.

As part of that program, the U.S. military recently expanded its Patriot missile force to the size of a full brigade, establishing the 35th Air Defense Artillery Brigade in South Korea with eight firing batteries at four locations around the peninsula.

According to the 8th Army, the last of the 30 older Abrams tanks left South Korea from Pusan on Dec. 9. The 8th Army took delivery of about 90 upgraded tanks over a six-month period that ended in November.

Besides improved armor, the AIM features a new vehicle intercom system that helps the tank commander and driver hear each other more clearly over the noise of the tank.

Another improvement &#8212; a pulse-jet air system that filters dirt, dust and debris from the engine &#8212; can extend the engine&#8217;s life and reduce time and money spent on maintenance.

The AIM&#8217;s &#8220;eye-safe&#8221; laser range finder reduces the threat of eye damage or blindness to crewmembers who have to use the laser in battle. The laser range finder uses a laser beam to determine the distance between the tank and its target.

Gunners had to wear safety goggles when using the equipment, and it also posed a hazard to any friendly troops who might be downrange of the laser.

But perhaps the foremost difference, armor troops said this week, is the embedded high-tech electronics package that greatly aids troubleshooting mechanics in pinpointing what&#8217;s wrong with a tank.

&#8220;In the armor community, your equipment is very important to us; everything we do revolves around the tanks,&#8221; said 1st Lt. Bryce Butler, 3rd platoon leader in Company A, 1st Battalion, 72nd Armor Regiment. &#8220;The systems have to work.

&#8220;It&#8217;s made diagnosing a little bit easier,&#8221; said Staff Sgt. Jason Marsh, organizational maintenance shop foreman with Company A, &#8220;because now, instead of carrying seven boxes of equipment out there to do maintenance on a tank, you can take a laptop out there and do quite a bit of it.

&#8220;Take that to the tank and hook that up, and we can use that to further diagnose it down to the faulty component, whereas before we had the embedded diagnostics, all &#8230; had to be done manually. The tank could not tell you a thing, because it really didn&#8217;t have any kind of communications capability.&#8221;

Better diagnosing can translate to quicker upkeep, and in turn, to having more tanks ready for battle.