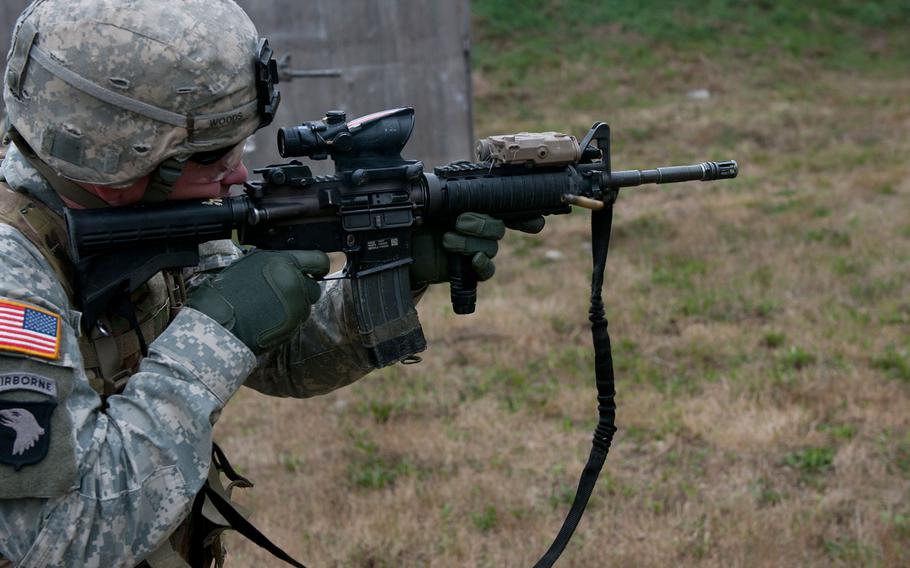 The U.S. Army has changed the functions checks and immediate action drills for its M4 carbines and M16 rifles after discovering a flaw in many of the weapons. (Courtesy of the U.S. Army)

The Army is updating procedures for use of the M4A1 automatic rifle after a soldier recorded cellphone video of his weapon firing when it shouldn’t have.

The video, recorded in late March, shows the soldier operating a rifle that has been converted from a standard M4, which can fire a maximum three-round burst, to the fully automatic M4A1, according a safety message sent to troops on Tuesday.

The soldier places his carbine’s selector switch between “semi” and “auto” and squeezes the trigger but it doesn’t fire, until the switch is moved to “auto” and immediately discharges a round, the message says.

The Army’s Tank-automotive and Armaments Command, or TACOM, first warned soldiers about the problem in March and April.

Inspectors were able to replicate the malfunction depicted in the soldier’s video in about 10 percent of the weapons they checked, defense industry journal Soldier Systems reported.

Testing also revealed that carbines from a different manufacturer malfunctioned when switched from “safe” to “semi-automatic,” the journal reported.

The latest safety messages concern M4s and M4A1s, as well as M16A2, A3 and A4 rifles. They order personnel to change the way they check functions on the weapons and perform immediate action drills to diagnose weapon stoppages.

The new functions check, which should be performed every 10 days or prior to live fire, whichever comes first, should identify weapons in which the fault is present.

The new immediate action drill, in which firers confirm that the selector switch is fully set to “semi” prior to conducting the rest of the drill, is aimed at preventing the unintended discharges.

The Army’s Armament Research, Development, and Engineering Center and Project Manager Soldier Weapons are investigating the incident. So far, no single cause for the issue has been identified, the safety messages say.

Here's how to identify weapons in which the fault is present These are the steps in the new functions check:

1. Ensure weapon is clear by observing the chamber, the bolt face, and magazine well. The weapon should always be pointed in a safe direction.

2. Charge the weapon, place selector lever on the safe position and pull trigger. The hammer should not drop.

5. Gather information recorded from failures at steps (3) and (4) and segregate the weapon for further investigation. Contact TACOM with the weapon serial number.

Here's how to prevent unintended discharges The familiar “SPORTS” is now “C-SPORTS.” If the weapon does not fire when the trigger is pulled, safety-of-use message 18-005 changes the immediate action drill to:

1. Confirm that the selector is set to semi, auto or burst.

2. Slap upward on the magazine to make sure it is properly seated.

3. Pull the charging handle completely to the rear and hold.

4. Observe for ejection of case or cartridge, and ensure the cartridge or case is ejected and the chamber is clear.

5. Release the charging handle to feed a new round.

6. Tap the forward assist to ensure the bolt is closed.

7. Squeeze the trigger; the weapon should fire.