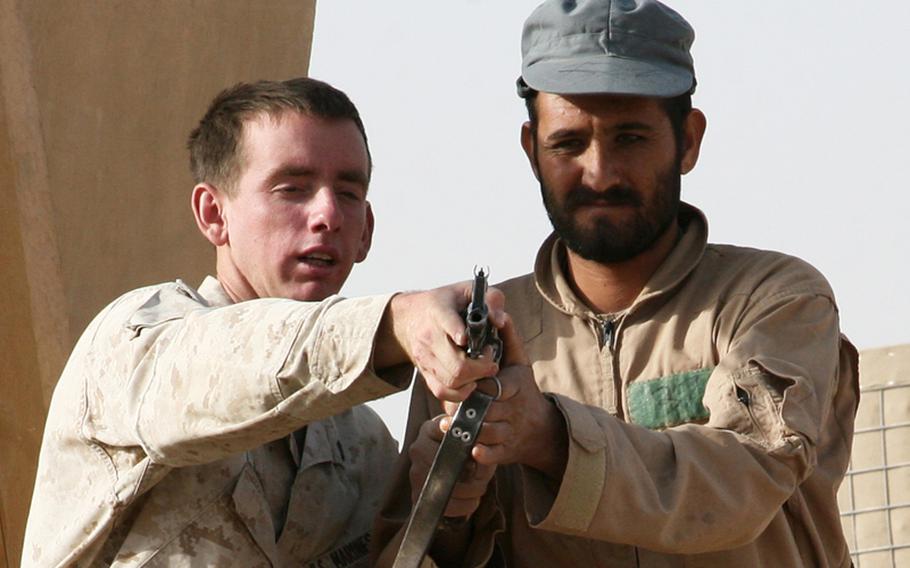 Cpl. Tyler M. Rousselle, a Joint Security Academy Southwest instructor, explains proper weapons handling to an Afghan National Police recruit during a field exercise at Camp Leatherneck, Afghanistan, in August 2010. Beginning in 2012, the U.S. will shift its mission in the country to focus on training and advising Afghan forces. (Brian Gabriel/Courtesy of the Department of Defense)

WASHINGTON &mdash; Soldiers began preparing last week to deploy to Afghanistan as part of the new training-and-advisory mission designed to end the U.S. combat role ahead of the 2014 withdrawal deadline.

The Pentagon has tapped elements of four brigade combat teams to lead the mission shift this spring, according to the Army. Thousands of soldiers will begin deploying around May as Security Force Assistance Teams, with more to follow in the fall. Such deployments will continue until it&rsquo;s the predominant mission in the country, the Army said.

The White House hasn&rsquo;t officially announced the policy change &mdash; analysts expect President Barack Obama to do so at the NATO summit in Chicago in May &mdash; but Marine Gen. John Allen, the top Afghanistan commander, laid out the basics of the new strategy last week.

The soldiers are expected to operate nationwide in 12- to 16-man teams, living among Afghan National Police, Afghan National Army and Afghan National Civil Order Police. They will help plan operations and coordinate with U.S. close air support and medevac assets.

It&rsquo;s unclear how the influx of these soldiers fits with the planned drawdown of surge troops, which is supposed to leave troop levels at 68,000 by October.

The approach is similar to the advise-and-assist effort enacted in Iraq as the combat mission began winding down there in 2009 and officially ended in August of 2010. Although the revised strategy for Afghanistan pulls from the Security Force Assistance manual devised in 2009, Army sources say it&rsquo;s being altered considerably to fit the situation in Afghanistan. All the BCTs except the group from Fort Campbell previously served as advise-and-assist units in Iraq.

The change in mission is accelerating the deployment schedule for soldiers within at least one of the combat teams. The 2nd BCT of the 101st, which will send soldiers to eastern Afghanistan, hadn&rsquo;t anticipated returning until early 2013, according to the unit&rsquo;s Facebook page.

They served in Kandahar during the surge, arriving home last May. Roughly 600 to 700 members of the 3,500-member 2nd BCT will deploy again just as their required one-year of dwell time is up. Those soldiers, including most of the unit&rsquo;s senior and noncommissioned officers, started gearing up for the new role last week.

Allen&rsquo;s announcement followed on the heels of a policy paper recommending just such a strategic shift from the Center For a New American Security, a Washington-based think tank with close ties to the Obama administration and the Pentagon.

Report co-author Andrew Exum, a former Army Ranger who commanded troops in Afghanistan, said he has some questions about how the assistance teams would be employed, &ldquo;but certainly it&rsquo;s a positive step.&rdquo;

Currently, although U.S. and Afghan troops are supposed to work hand in hand, in reality, Afghan troops lag behind, he said. The U.S. military must start pushing the Afghans to the fore, he said, even if it means they sometimes fail.

&ldquo;The time you want to find out how good your Afghan allies are is now when you have the resources on the ground to support them, not at the end of 2014, when you don&rsquo;t,&rdquo; he said.

He said ideally the new assistance teams would consist of experienced commissioned and noncommissioned officers &mdash; the soldiers who are the best trained for the demands of an advisory mission. He also recommended that the SFAT groups operate under the direction of special forces A-teams, which are experts at such work.

&ldquo;It can be deeply frustrating to work with Afghan units,&rdquo; he said, noting sometimes limited operational skills and language barriers.

But he said U.S. troops know it&rsquo;s time to transfer so they can eventually leave behind a force that can stand up to insurgents. &ldquo;They understand we are drawing down in Afghanistan,&rdquo; Exum said. &ldquo;And I think frankly a lot of them are sick of the war and want to come home.&rdquo;

Troops in Afghanistan told Stars and Stripes the impending shift is necessary for the development of Afghan security forces.

&ldquo;It can be kind of hard for us to work with them because of the language barrier, the cultural differences,&rdquo; said Sgt. David Bridgeman, 27, of Peoria, Ill., who serves with Company C of the 2nd Battalion, 27th Infantry Regiment stationed at Forward Operating Base Bostick in northern Kunar province. &ldquo;So if you can bring in advisers who work with them side by side and can interact with them even more than we do, it&rsquo;s going to help them make progress more quickly as far as taking control of their own country.&rdquo;

Another soldier from the same unit said the plan would succeed &ndash; if the mission is properly staffed.

&ldquo;As long as you have enough advisers embedded, I think it could work,&rdquo; said Staff Sgt. Damien Chandler, 29, of Tampa, Fla. A key advantage of a shift to an advisory role would be the ability to focus, Chandler said.

&ldquo;Right now, we have to do a lot of things in addition to working with [Afghan soldiers],&rdquo; he said. &ldquo;So with the advisers being able to concentrate on just working with Afghans, that could help them develop faster as the coalition forces withdraw.&rdquo;

&ldquo;In certain areas, we&rsquo;re a lot closer to having them at the advise-and-assist level than a lot of people realize,&rdquo; he said. &ldquo;In the past four months, we&rsquo;ve gone from 15 ANA for every 30 U.S. on air assaults, to now we have 30 ANA for every eight U.S. soldiers. That&rsquo;s incredibly significant.

&ldquo;They&rsquo;re still going to need help on basic logistics, but at the tactical level, they&rsquo;re proficient.&rdquo;

Stars and Stripes reporters Chris Carroll in Washington and Martin Kuz and Laura Rauch in Afghanistan contributed to this report.