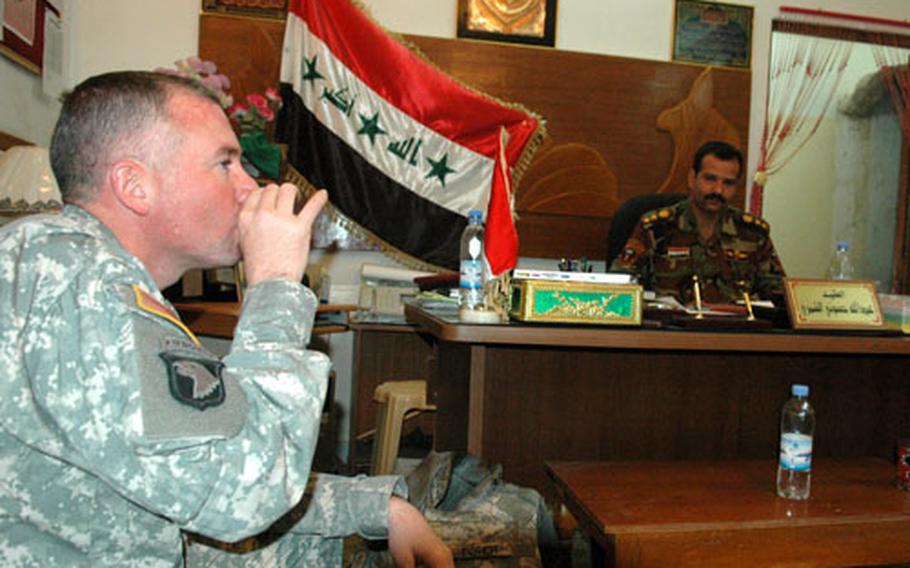 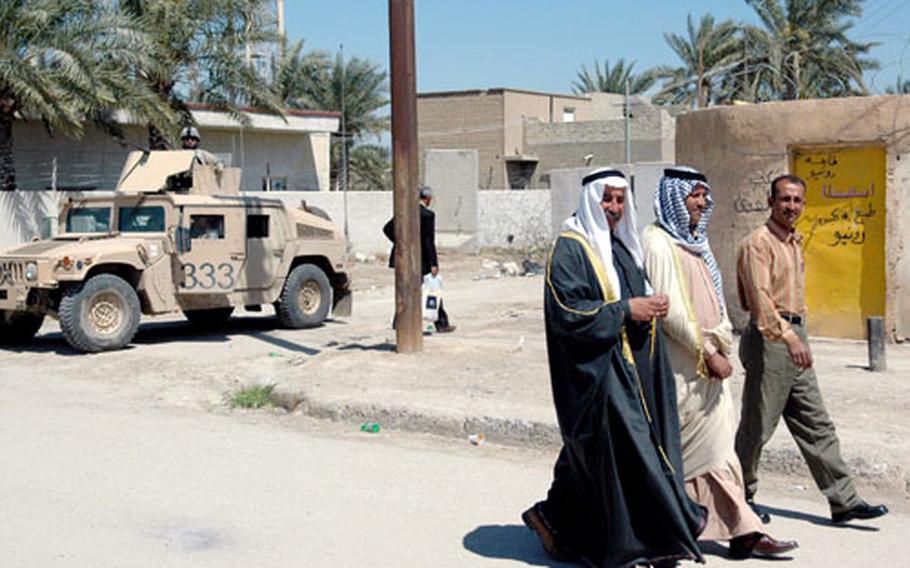 Local men stroll past a U.S. Humvee in downtown Khalis, where a surge in violence during the past week has drawn increased U.S. attention. (Andrew Tilghman / S&S)

KHALIS, Iraq &#8212; With a string of kidnappings, assassinations and an attack on a mosque last week, this small city with a mix of Sunnis and Shiites about 50 miles north of Baghdad has seen a surge in violence in recent weeks.

&#8220;When I first got here, everything was under control,&#8221; said Lt. Col. Thomas Fisher, the battalion commander who oversees a sweeping area of cities and farmland in western Diyala province, where tensions have run high since the Feb. 22 bombing of a Shiite shrine in Samarra.

The increase in attacks here comes about one year after U.S. troops determined Khalis to be one of the most stable cities in Diyala and set in motion plans to remove much of the battalion based here. In June 2005, most of the Army battalion based here was shipped to Ramadi to help a Marine unit with the uprising in Anbar province. A small task force of 100 troops remained here to work with the Iraqi army unit.

In January 2006, troop strength in the entire area was reduced incrementally and Khalis was handed over to the U.S. battalion based in the nearby provincial capital of Baqouba.

The nature of the recent violence has evolved from last year, when attacks on U.S. and Iraqi troops were common, soldiers said.

&#8220;Now the insurgents are not targeting us anymore, said Col. Abdulla, the Iraqi army battalion commander based in Khalis. &#8220;Now they are targeting the innocent civilians.&#8221;

Local government officials are especially at risk. A top aide to the city&#8217;s mayor was killed recently in a bombing that also killed his son and his driver, Fisher said.

Some troops speculate that the insurgents have fled to this area after extensive U.S. military operations in surrounding cities &#8212; particularly the massive sweeps conducted in the Samarra area after the bombing there.

&#8220;We&#8217;ve applied a lot of pressure elsewhere, so they&#8217;ve come here now,&#8221; Fisher said in a recent meeting with Abdulla. Others believe that the insurgents have strategically targeted the area.

&#8220;The insurgents are trying to disrupt the progress that was made,&#8221; said Maj. Isidoro Santana, who works in the civil affairs unit that arrived in Khalis last summer. &#8220;What I see is the peacefulness has brought the attacks.&#8221;

Locals suggest some of the attacks do not stem from the traditional Sunni insurgents but from local Shiite militias, sparking a cycle of violence that draws reprisals from the Sunni fighters.

&#8220;We need to get the militias off the streets because it makes people mad and it gives the terrorists a reason to come here,&#8221; said Salem Jawad, a Sunni leader on the local Khalis legislative council.

Santana agreed that the recent violence targeting civilians causes political problems because it is often unclear who is attacking whom.

Fisher said Khalis is becoming one of his top priorities. He said he plans to move some U.S. troops into the area and spend more time working with the Iraqi soldiers to quell the attacks.

Khalis marks a contrast to the surrounding area, where attacks, roadside bombs and assassinations have dropped in recent months. Fisher told the Iraqi commander that this may be the last stand for the region&#8217;s insurgents.