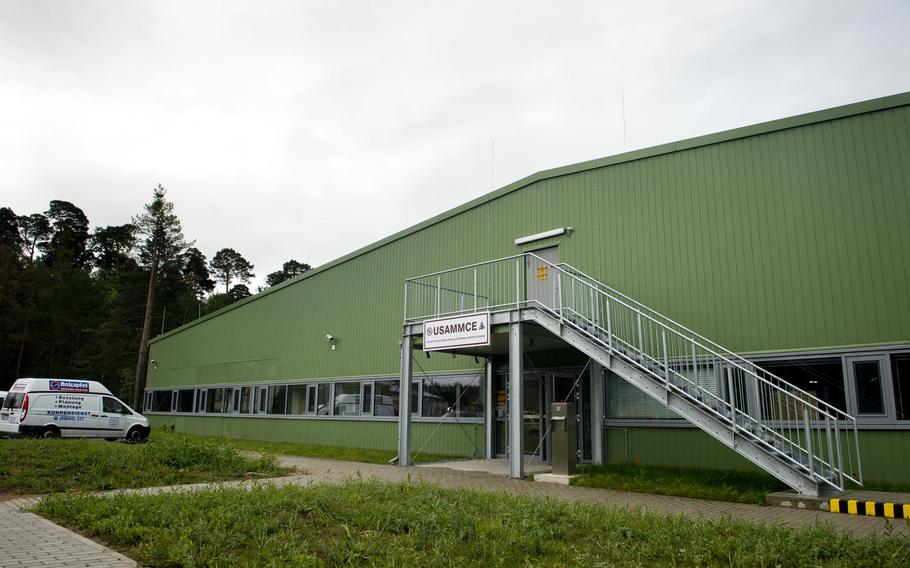 The future site of the United States Army Medical Materiel Center at Kaiserslautern Army Depot, Germany, on Thursday, July 20, 2017. The USAMMCE is supposed to move from Pirmasens to Kaiserslautern but will be delayed for at least 90 days due because of a conflict with German officials. (Michael B. Keller/Stars and Stripes)

KAISERSLAUTERN, Germany — German authorities are holding up the move of a U.S. Army medical support unit from Pirmasens to Kaiserslautern because they say the Army didn’t properly consult German construction officials before renovating six base buildings ahead of the move.

The U.S. Army Medical Materiel Center Europe, or USAMMCE, was slated to relocate this month to Kaiserslautern Army Depot from Husterhoeh Kaserne, a process that could be delayed by up to 90 days, said Ray Johnson, an Installation Management Command-Europe spokesman. The move will affect 60 Americans and 219 local Germans.

The project was flagged by an apparent misunderstanding over what category of military construction projects requires German government oversight, as outlined in the U.S.-German Status of Forces Agreement, officials said.

Martin Treutlein, a spokesman with Germany’s federal construction office, said the military assumed it could complete the renovations independently, without seeking his office’s approval.

Foreign forces stationed in Germany have certain freedoms when doing renovation work on their bases, Treutlein said, but in this case, prior consultation was required to ensure, among other things, that state guidelines were considered and that certain safety, environmental and labor standards were met.

Johnson said the project at KAD cost about $40 million and involved the complete renovation of six buildings to “ensure they met standards and codes for a workforce environment.”

The renovation work included repair of the buildings’ heating, cooling, ventilation and communication systems, Johnson said. Walls and windows were also repaired, and replacement of floors, suspended ceilings, and the roof, as needed, he said. Exterior improvements included minor asphalt paving and pedestrian access to the facilities.

The work, which was done by a German construction company in conjunction with the U.S. Army Corps of Engineers, is finished, he said.

“Occasionally, U.S. Forces and host-nation agencies have differing views on categories of military construction, which have various procedural steps,” Johnson said in a statement to Stars and Stripes. “To ensure an agreement is met with our host-nation counterparts regarding the renovation project at KAD, we are completing and submitting final documents needed for permit approvals.”

The move of the Army unit to Kaiserslautern is part of the continuing drawdown of U.S. forces in Pirmasens, a process which has dragged on more than 20 years. The official turnover of the facilities to German authorities occurred in 1994. Much of the former U.S. base has since been converted to commercial development.

The unit, which falls under U.S. Army Medical Command, is primarily responsible for medical logistics in the European, African and Central Command areas of responsibility.