Army uniform designed for women now for all 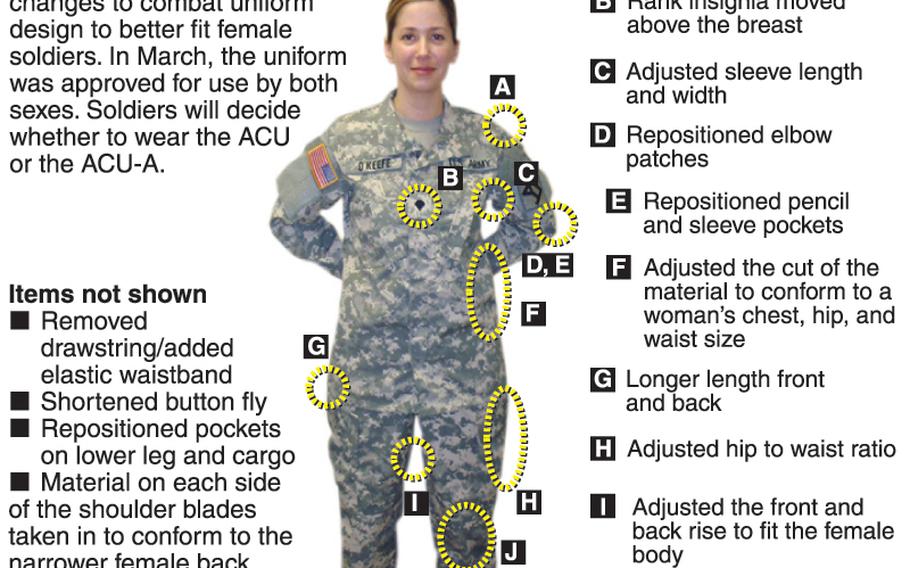 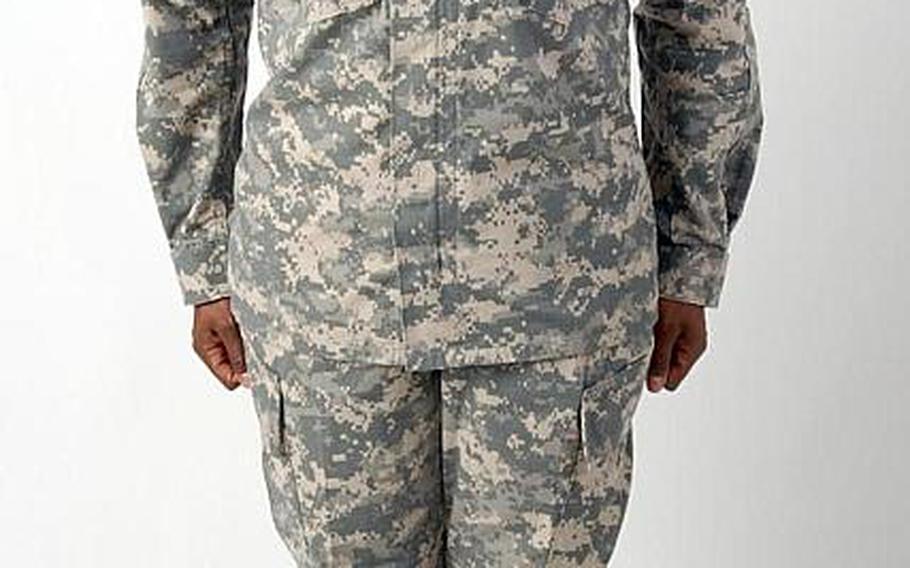 Some 300 male soldiers wore the new &ldquo;Army Combat Uniform &mdash; Alternate&rdquo; last month on bases in Georgia and Texas to fit-test the garments. Results are expected next month, according to officials at the Program Executive Office Soldier at Fort Belvoir, Va.

The uniform &mdash; with narrower shoulders, a slightly tapered waist, a slightly flared hip, a more spacious seat and an elastic waist &mdash; has been in the works for three years. The Army Uniform Board approved funding to research a female-only uniform in 2009.

According to a 2008 Army focus-group report, &ldquo;unisex&rdquo; ACUs, designed for men, fit many women badly in the &ldquo;shoulders, bust, hips and crotch.&rdquo;

&ldquo;Many women also believe that they do not project a professional appearance when wearing the ACU,&rdquo; according to the report.

Last year, Maj. Sequana Robinson at PEO Soldier told The Associated Press that the new uniform &mdash; by then in prototype &mdash; was &ldquo;a better fit to a woman&rsquo;s dimensions based upon the measures of a woman&rsquo;s body.&rdquo;

But in March, the uniform board approved the uniform for both sexes. &ldquo;The Army is not moving forward with a female-only ACU,&rdquo; PEO officials, who declined to be identified, wrote in an emailed response to written questions.

Instead, the ACU-A will be authorized to be worn by all soldiers. The coats and trousers will come in more than a dozen sizes. According to PEO Soldier officials, they might appeal to &ldquo;smaller statured male soldiers.&rdquo;

&ldquo;It&rsquo;s really about preferences,&rdquo; said Capt. Mia Bruner, assistant product manager for initial-issue uniform, a part of PEO Soldier. &ldquo;We want to frame the launch of this uniform to be available to all soldiers. This uniform will benefit every soldier. There are some men who&rsquo;ll feel their appearance is a little more professional,&rdquo; she said.

It&rsquo;s unclear how the uniforms became officially unisex. But in 2010, the Defense Advisory Committee on Women in the Services, while lauding an effort to accommodate flight suits to women, said that a female-only suit was a bad idea.

It was &ldquo;neither necessary nor desirable,&rdquo; the committee said in its report, &ldquo;because it draws unwarranted attention to gender differences.&rdquo;

The committee recommended &ldquo;one suit that works for both men and women.&rdquo;

The ACU-As are expected to be available to basic trainees in January and in military exchanges a few months later.

That puts them ahead of the new body armor designed for women, undergoing field testing now by women with the 101st Airborne Division at Fort Campbell, Ky.

Among those testers was Capt. Lindsey Pawlowski, who in a recent phone interview said the new body armor fit better than the standard, which among other issues, was too long in the torso.

She&rsquo;d heard about the new ACUs, she said. &ldquo;The idea of the elastic waistband &mdash; I&rsquo;m not enthused about it,&rdquo; she said. The other design features sounded good, she said.

Women who prefer the standard ACU will be authorized to wear it, officials said.

Military women have worn uniforms and equipment designed for men for decades. The reason concerns about fit were being addressed now was because of &ldquo;growing awareness,&rdquo; the PEO Soldier email said.

&ldquo;Better fitting uniforms and body armor allow the soldier greater mobility and better comfort which in turn provide superior endurance and better job performance. That helps them perform their mission.&rdquo;

Not that they couldn&rsquo;t do that before. &ldquo;Bear in mind that the equipment that was fielded to both male and female soldiers performed well,&rdquo; the email said. &ldquo;The uniforms did fit, and the body armor saved lives.&rdquo;