Army trains soldiers on how to be mentally, emotionally tough 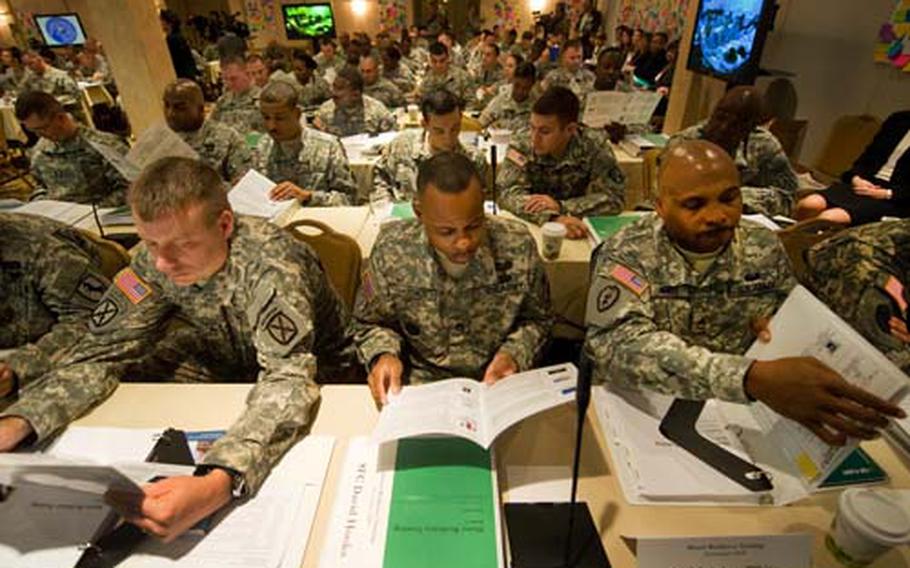 Soldiers review the curriculum of the Master Resilience Trainer course at the University of Pennsylvania in Philadelphia in November. The course is one component of the Comprehensive Soldier Fitness program and is intended to teach students how to build resilience skills to soldiers, family members and Army civilian employees. (Myles Cullen/Courtesy U.S. Army)

A class full of battle-hardened sergeants in combat boots, being taught by a bunch of loafer-clad professors. The subject, more or less: how to be happier.

But as the 10 days of master resiliency training continued, those feelings faded, said Bradley, who was among the first group of NCOs to go through the first-of-its kind Army psychological course.

The Army&#8217;s not in the marriage-counseling business, but it does try to keep soldiers alive &#8212; and failed relationships are a significant factor in the record suicide rates in the past several years. Additionally, up to 30 percent of troops are beset with PTSD and depression as soldiers have made repeated trips to war zones.

So the Army&#8217;s latest response is to require its million-plus soldiers to be trained in &#8220;emotional resilience,&#8221; or psychological hardiness. The training, led by the University of Pennsylvania&#8217;s Positive Psychology Center, teaches concepts such as focusing on what goes right, expressing gratitude, and analyzing and correcting negative views of ambiguous events.

According to the Center&#8217;s Web site, Martin Seligman, the center director who is regarded as a founder of positive psychology, says his research shows &#8220;it is possible to be happier &#8212; to feel more satisfied, to be more engaged with life, find more meaning, have higher hopes, and probably even laugh and smile more, regardless of one&#8217;s circumstances.&#8221;

But social critics, such as Barbara Ehrenreich, who wrote The New York Times best-seller &#8220;Nickel and Dimed,&#8221; say that what Seligman markets in his books and classes is, like positive thinking in general, &#8220;snake oil&#8221; with numerous downsides.

In her book &#8220;Brightsided: How the Relentless Promotion of Positive Thinking Has Undermined America,&#8221; Ehrenreich argues that positive thinking and too much optimism lead to disasters like the Iraq war and the financial meltdown. She also says the emphasis on optimism means victims end up being blamed for their own misfortunes: they weren&#8217;t positive enough.

Brig. Gen. Rhonda Cornum, the Army assistant surgeon general for force protection who heads up the Comprehensive Soldier Fitness program, said the Penn program was selected because data showed it worked to decrease depression and anxiety and improve performance.

A $117 million effort, it&#8217;s the first time Army-wide psychological training has been mandated. But whether it&#8217;s the right training is a matter of some debate. While positive psychology is well accepted by many psychologists, some, like Ehrenreich, dismiss it as recycled &#8220;power of positive thinking.&#8221;

And some who agree it&#8217;s had success with middle school students &#8212; and that its values of transcendence, community and altruism fit well with military values &#8212; still don&#8217;t think it will work for soldiers in combat conditions.

Naparstek said that positive psychology techniques can&#8217;t counter the profound loss, grief, fury and disorientation that combat can bring, such as seeing a friend&#8217;s legs blown off by a roadside bomb.

Nor will it help prevent suicide, she said.

Cornum said the training does not deny that terrible things happen in combat but should help soldiers develop a &#8220;useful&#8221; response to them.

&#8220;Certainly if more people stop seeing a challenge as a catastrophe,&#8221; she said, suicide rates should come down.

Gen. George Casey, Army chief of staff, has visited the Philadelphia classrooms where Bradley and other sergeants have undergone their training, and he&#8217;s a proponent of the training.

Soldiers are &#8220;not coming into the service with the coping skills they need,&#8221; Casey told the Philadelphia Inquirer in a story posted on the Positive Psychology Center&#8217;s Web site.

But Casey also said most soldiers do not suffer from PTSD.

&#8220;In fact, science tells us just the opposite; the majority of people who go to combat have post-traumatic growth. They&#8217;re confronted by something very difficult, and they are stronger as a result,&#8221; Casey said in a military press release.

Some psychologists view remarks like Casey&#8217;s as an example of the regrettable but routine downplaying by the military of inconvenient truths about the psychological tolls of combat.

Psychologist Bryan Welch wrote that during the Gulf War, military psychiatrists dismissed concerns about the psychological health of troops&#8217; children when their parents left them to deploy. Now, he said, the military is doing it again.

&#8220;In truth, the military has once again retained the positive psychologists, this time to help it use limited mental health resources to suck one last measure of devotion from a bone-weary combat force, many of whom have already been through multiple deployments,&#8221; Welch wrote on the Huffington Post Web site.

While sergeants are being selected to go to the training, and new recruits will get lessons from their drill sergeants, other soldiers will be participating first by completing a confidential questionnaire &#8212; the Global Assessment Tool &#8212; to determine their strengths and weaknesses in several &#8220;fitness&#8221; areas: emotional, social, family and spiritual. Follow-up training would vary with the soldiers&#8217; scores.

In the meantime, just as many sergeants became fans of his training, Seligman became a fan of the sergeants.