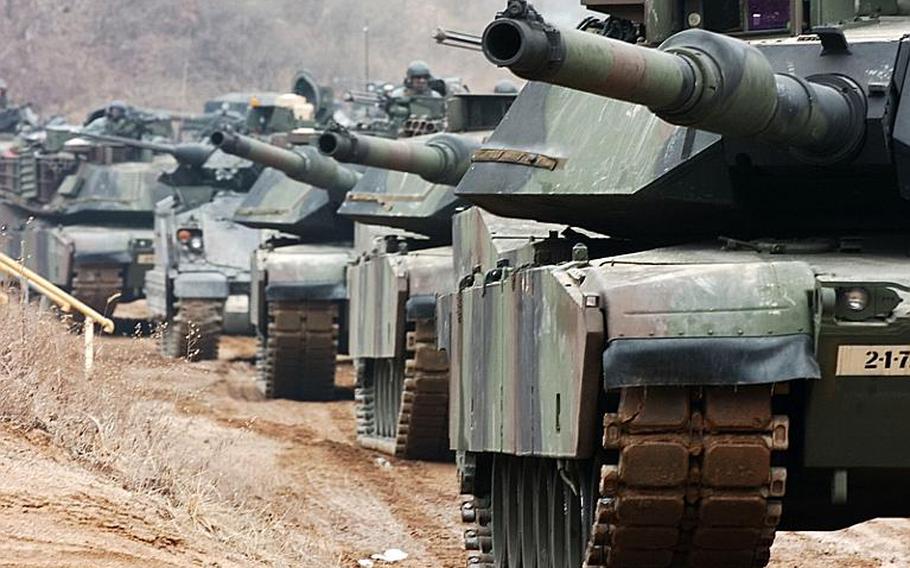 M1A1 Abrams tanks from 1-72nd Armor Regiment line up in preparation to assault a town during Warrior Focus, a training exercise at the Combined Arms Collective Training Facility at Rodriguez Live Fire Complex, South Korea. The Army has directed its commanders to start training its soldiers on hybrid threats, which means soldiers will now prepare not only for counterinsurgencies, but for conventional wars as well. (Christen Best/U.S. Army)

GRAFENW&#214;HR, Germany &#8212; After nearly a decade of fighting insurgents, the Army is shifting its training to focus more on &#8220;hybrid threats&#8221; &#8212; in which an enemy uses a combination of conventional and unconventional warfare.

Since the wars in Iraq and Afghanistan began, Army units have been training for counterinsurgency operations, according to a Joint Multinational Training Command newsletter. But with the U.S. preparing to withdraw its combat troops from Iraq, Army leaders are directing their commanders to conduct &#8220;full-spectrum&#8221; field exercises, which would include tanks, artillery and the other conventional equipment that has not been used much in the current wars.

Col. Frank Zachar, commander of the Grafenw&#246;hr-based 172nd Infantry Brigade, described a hybrid threat as an enemy with a greater capability than the insurgents U.S. forces have been battling in Iraq and Afghanistan.

Army Secretary Gen. George Casey said a good example of a hybrid threat is Hezbollah, the Lebanese militia whose aim is to eject Israeli forces from the occupied territories in Israel.

&#8220;It&#8217;s a mix of conventional, irregular, terrorist and criminal capabilities that are organized and employed asymmetrically. That&#8217;s what we&#8217;re going to see,&#8221; Casey said during a speech in May at the African Land Forces Summit.

Michael O&#8217;Hanlon, a senior fellow at the Brookings Institution specializing in defense and foreign policy, said a hybrid conflict in a place such as Iran or North Korea might mix insurgency with conventional forces and even weapons of mass destruction.

And while the Army must continue to focus on training soldiers for deployments to Afghanistan, &#8220;our military overall does not have the luxury of ignoring other possible threats and concerns.&#8221;

Yet, one Defense Department official said, America&#8217;s dominance in conventional warfare is an incentive for its enemies to use nontraditional tactics to undermine U.S. strengths and exploit its weakness.

&#8220;Preparing for this operating environment will pull the Army, and the military writ large, in two very different directions,&#8221; said Michele Flournoy, undersecretary of defense for policy.

On the one hand, the United States must be ready for irregular warfare, in which combatants blend in with civilian populations and use roadside bombs, suicide bombs and similar tactics, she said at an Army Leader Forum at the Pentagon last year, according to a DOD release.

Meanwhile, she said, the U.S. must remain prepared to deal with high-end threats, too.

To illustrate this concept, Flournoy described a scenario in which rising regional powers and rogue states use highly sophisticated technologies to deny U.S. access to critical regions and to thwart its operations. These tactics range from anti-satellite capabilities, anti-air capabilities and anti-ship weapons to weapons of mass destruction and cyber attacks.

The 172nd Infantry Brigade has been ordered by the Army to devote some of its current dwell time between combat deployments to conduct these &#8220;hybrid threat&#8221; field exercises, Zachar said.

To that end, the Joint Multinational Training Command in Hohenfels is retraining its trainers, known as the opposing forces, to &#8220;replicate the entire span of threats required&#8221; for such an exercise, according to the newsletter.

The 172nd&#8217;s public affairs officer, Maj. Joseph Buccino, said a hybrid warfare exercise would likely involve enemies comprised of a simulated conventional force equipped with tanks and artillery as well as insurgents blending into a population of civilian role-players.

The soldiers in the 172nd are excited about the training, Zachar said.

&#8220;We&#8217;re looking forward to a threat that will span the entire spectrum of conflict,&#8221; he said of the exercise. &#8220;The exciting part of this is we are going to be able to operate as a heavy brigade using all our offensive and defensive capabilities.&#8221;

The 172nd has units that can fight as either light or heavy forces, he said.

The soldiers, who spent their last deployment training Iraqi security forces and patrolling in heavily armored Mine Resistant Ambush Protected vehicles, are ready to climb back in their tanks and Humvees.

&#8220;Many of our soldiers who came into the Army to be a tanker or an artilleryman relish the opportunity to train and operate on these systems,&#8221; he said.

Sgt. Maurice Mack, 26, of Trenton, N.J., a tanker serving with 172&#8217;s Company C, 3rd Battalion, 66th Armor Regiment, said he spent two deployments to Iraq patrolling in a Humvee as a light infantryman but did intensive tank training while serving in South Korea from 2007 to 2008.