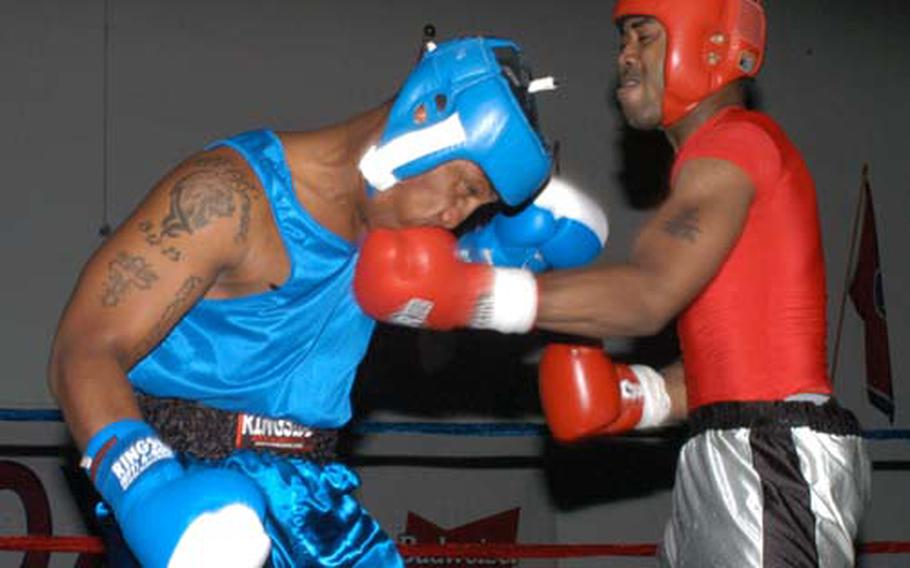 Two servicemembers fight during an August 2007 boxing match at Kunsan Air Base, South Korea. (Courtesy of the U.S. Air Force)

PYEONGTAEK, South Korea &#8212; The U.S. Army in South Korea will lift its ban on boxing matches, but participants will have to follow several new safety rules, an Army spokesman said Tuesday.

The ban was imposed last fall after Army Pfc. Jason Price collapsed during a boxing match and later died.

The new rules will apply to all &#8220;high-risk contact&#8221; sporting competitions, including wrestling, mixed martial arts and tae kwon do.

The rules govern only soldiers and civilians assigned within 8th Army in South Korea and do not apply to regular unit martial arts training, said Maj. Jerome L. Pionk, an 8th Army spokesman in Seoul.

The new rules, which include mandatory physicals for competitors, give the Army in South Korea closer oversight in violent contact sports and will help screen those who are unfit for competition.

Until now, boxing matches and similar events were staged at the discretion of sponsors &#8212; Army athletic directors, sports and recreation coordinators, or even individual military units, Pionk said.

An official policy letter spelling out details of the new rules will go out next week to all 8th Army units and organizations, Pionk said.

Price, 21, was pronounced dead on Sept. 27, 2008, at the 121st Combat Support Hospital at Yongsan Garrison in Seoul. He was flown there by medevac helicopter after collapsing in the ring at Camp Casey during a boxing tournament.

New rules for fightingEighth U.S. Army is putting in several new requirements for boxing matches and other high-risk contact sports. Among the new rules:

Soldiers must pass a thorough sports physical exam within 30 days of taking part in a competition. The exam must be carried out by a physician or physician&#8217;s assistant at an Army health facility that has immediate access to the soldier&#8217;s medical records. Soldiers will also have to pass an abbreviated pre-fight exam the day of the competition, a requirement that was already in place.

Soldiers must receive permission from their units to participate.

Officials may only hold competitions at places within a 20-minute drive from a health facility able to treat severe injuries, including blunt trauma head injuries.