Army to get bulk of $3.4B planned for Europe 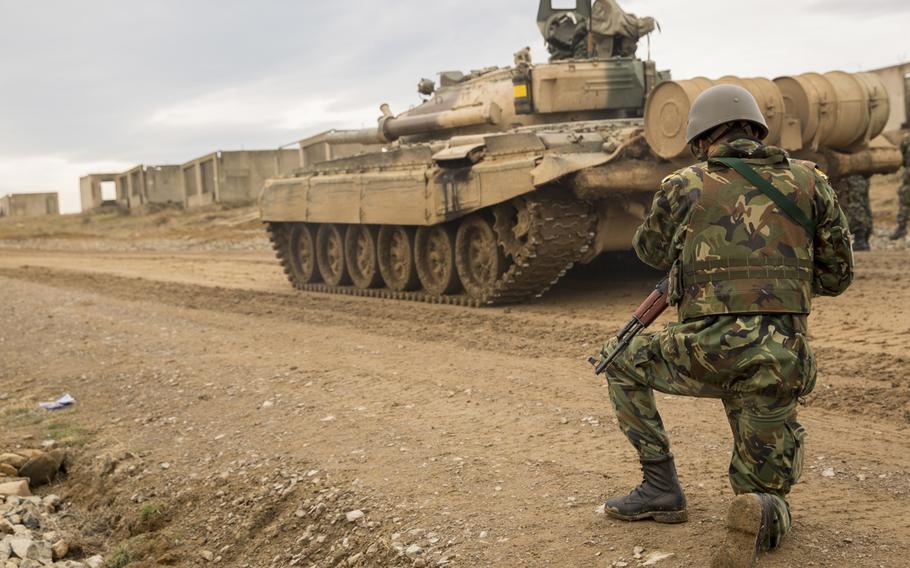 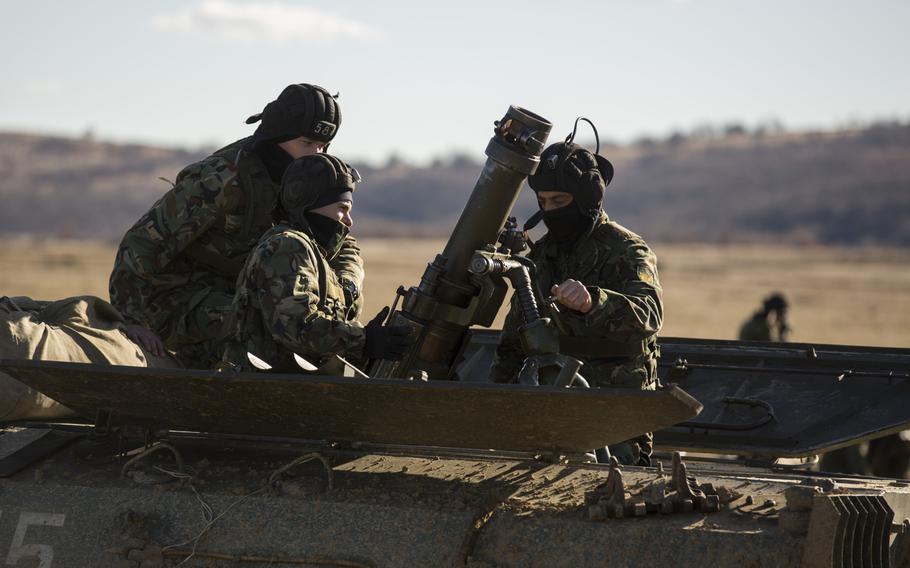 U.S. Marines, along with Bulgarian and Romanian forces conduct a joint exercise involving Bulgarian and U.S.tanks at Novo Selo Training Area, Bulgaria, on Jan. 15, 2016. The Pentagon has asked for $3.4 billion for FY2017 to fund the European Reassurance Initiative, a plan that would involve rotating a heavy brigade through Europe. () 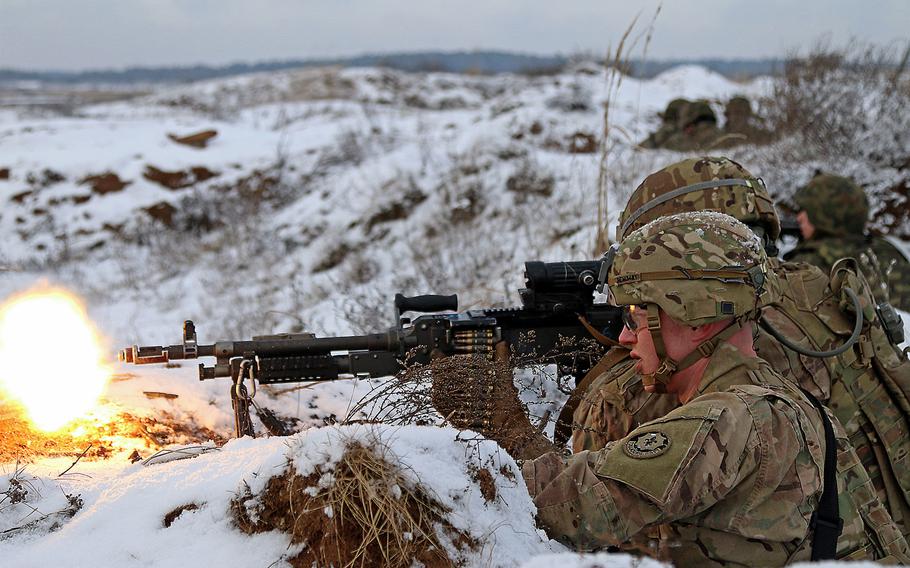 Spc. Ethan Mitchell, front, and Spc. Raymon Najera of the 3rd Squadron, 2nd Cavalry Regiment, fire their M240 machine guns during an exercise Jan. 18, 2016, at Konotop, Poland. The U.S. plans to spend $163 million next fiscal year on military exercises and $85 million on ''activities to build the capacity of European allies.'' (Paige Behringer/U.S. Army)

STUTTGART, Germany — The U.S. Army in Europe gets the big money and the bright shiny objects in a new Pentagon spending plan: more tanks, more artillery and more boots on the ground.

“This does demonstrate we are evolving in our ability to respond to acts of aggression,” said Maj. Gen. David Allvin, director of strategy at U.S. European Command headquarters in Stuttgart.

The U.S. decision to send combat-ready tanks to Europe, along with another brigade’s worth of infantrymen, eats up nearly all of the $3.4 billion the U.S. is seeking to fund the European Reassurance Initiative, which is aimed at deterring a more aggressive Russia. However, according to details released Tuesday, the plan still sets aside some funds for several low-profile, but strategic, projects.

If approved by Congress, the initiative will quadruple U.S. spending on operations in Europe, a region that has climbed up the list of Pentagon priorities since Russia’s intervention in Ukraine two years ago.

“Anytime such a tectonic shift happens in such a short time, it can be disruptive, but ... the more our potential adversaries are sending crystal clear aggressive moves, the easier it is to focus on them,” Allvin said of the strategic shift underway at EUCOM. “Right now, it seems like it is whirlwind fast.”

The big-ticket item in this year’s ERI — funded through overseas contingency funds rather than the formal Defense Department budget — is the decision to put a brigade’s worth of heavy armor fighting vehicles and artillery in Europe. That will cost the Pentagon about $1.9 billion, well more than half of all ERI expenditures. Increased troop rotations will cost $1 billion more, with the Army expected to eat up most of those funds with an additional heavy brigade rotating through Europe. That means U.S. Army Europe will now have two rotational brigades, providing a year-round presence of heavy units. Only two brigades are permanently stationed in Europe, both light infantry.

Two heavy brigades in Europe were inactivated within the last four years, the second of which withdrew less than a year before Russia’s intervention in Ukraine, when the U.S. viewed Russia in the post-Cold War era as a potential partner. That changed dramatically after Russia annexed the Crimea Peninsula from Ukraine in March 2014.

Unlike the 250 tanks and hundreds of other fighting vehicles that were brought back in 2015 to be part of the Army’s pre-positioned “European Activity Set,” the new gear will be less about joining training missions and more about combat readiness. The new tanks will mostly be stored in warehouses, where they will be kept to high maintenance standards to ensure reliable firepower in a crisis, according to EUCOM.

The initial stop for the new heavy equipment will likely be Germany, while the U.S. conducts negotiations with other allies to determine a final destination. Assessments and consultations with potential host nations are underway, EUCOM officials said.

“Those discussions and decisions are really to be able to look at the potential threat” and have equipment positioned in areas of possible conflict, Allvin said. “The very idea of pre-positioned stocks is that speed matters.”

The ERI also calls for $217 million in improved infrastructure that will facilitate the flow of forces and reinforcements.

One project with strategic implications is improving the Navy’s station at Keflavik in Iceland, adding more maintenance capabilities that could extend the rotations of PC-3 or PC-8 anti-submarine and maritime surveillance aircraft, according to EUCOM.

“It allows for greater presence, longer presence,” a EUCOM official said, speaking on condition of anonymity.

Signs of increased Russian submarine activity have been a cause of growing concern for allies across Europe.

“It expands our opportunity to conduct more day-to-day operations in partnering and training,” the EUCOM official said, adding that the focus will be on “various locations through the eastern flank.”

Some funding will also go toward temporary barracks for troops in the region.

Meanwhile, the U.S. is planning to spend $163 million on more military exercises and $85 million on “activities and assistance to build the capacity of European allies and partner nations.”

The Marine Corps in Europe will benefit from some of those increases, particularly in the Black Sea region, where Marines have long been a fixture as a rotational force. However, there are no plans to build new temporary barracks for Marines operating in the east.

“Obviously, as you know, the Marines like to be a little more austere. They like the tent living,” a second EUCOM official said.