Army to fly UAVs over DMZ 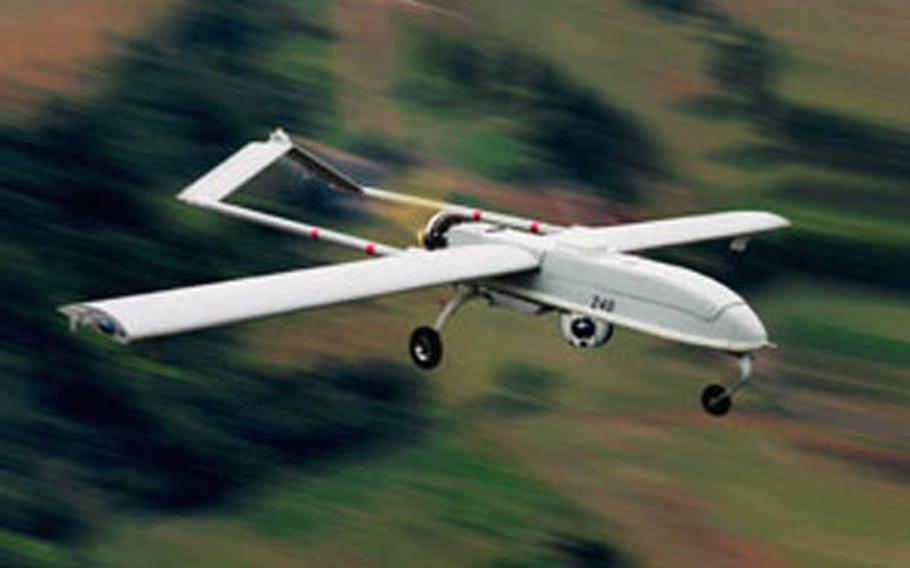 A Shadow 200 is shown flying in this photo. (Courtesy of U.S. Army)

YONGSAN GARRISON, South Korea &#8212; For the first time, the Army will fly unmanned, unarmed surveillance drones in the skies over the Demilitarized Zone between North and South Korea, officials announced Wednesday.

The Shadow 200 Tactical UAV is scheduled to make its first flight Friday, taking off and landing at Tongduchon&#8217;s Camp Mobile, 2nd Infantry Division officials said. The Shadow is a light, rail-launched drone with a 13-foot wingspan and 60 pounds of surveillance equipment.

&#8220;Under no circumstances will it be flown north of the DMZ,&#8221; Lt. Col. James Stockmoe, commander of the 102nd Military Intelligence Battalion, said in an Army news release. &#8220;Among other missions, it is ideally suited to provide counterfire targeting support, as well as overhead reconnaissance and surveillance for operations as varied as river crossings, search and rescue, and air assaults. Wherever the Shadow goes, U.S. forces will have a distinct advantage over any adversary.&#8221;

In recent years, UAVs have become ubiquitous military tools, widely used in Afghanistan and Iraq as both intelligence tools and offensive weapons. In a highly controversial November strike, CIA officials tracked and killed a suspected al-Qaida operative in Yemen, firing a Hellfire missile from a Predator drone.

The Shadow UAV, which usually flies at altitudes between 10,000 feet and 14,000 feet, has been scheduled for deployment with the 2nd ID since late 2001, officials said.

U.S. military officials in South Korea said they&#8217;ve taken a number of precautions to prevent accidents with the Shadow. While the craft needs only a 300-foot runway, officials installed a 1,500-foot runway at Camp Mobile; a commercial utility line on the craft&#8217;s approach path was lowered; and officials have handed out fliers to neighborhood residents so they won&#8217;t be scared by the low-flying craft.

Additionally, officials said, the Shadow has two in-flight safety systems to prevent a crash into a populated area. One is a simple parachute mechanism that deploys in emergencies. The second is a computerized program that sends the UAV to a predetermined unpopulated military area if the Shadow loses communications with its controllers.

Around 50 soldiers who work with the Shadow have been assigned to Camp Mobile, officials said.

&#8220;With the Shadow, we now have the ability to see first, understand first and finish decisively,&#8221; said Capt. Samuel Hall, commander of Company C, 102nd Military Intelligence Battalion, according to the Army release.

Deploying the Shadow is the latest evidence of $11 billion in improvements to U.S. and South Korean forces, the U.S. military said. Most recently, officials unveiled the PAC-3 Patriot missile system, an upgraded defensive system deployed to several bases in South Korea.