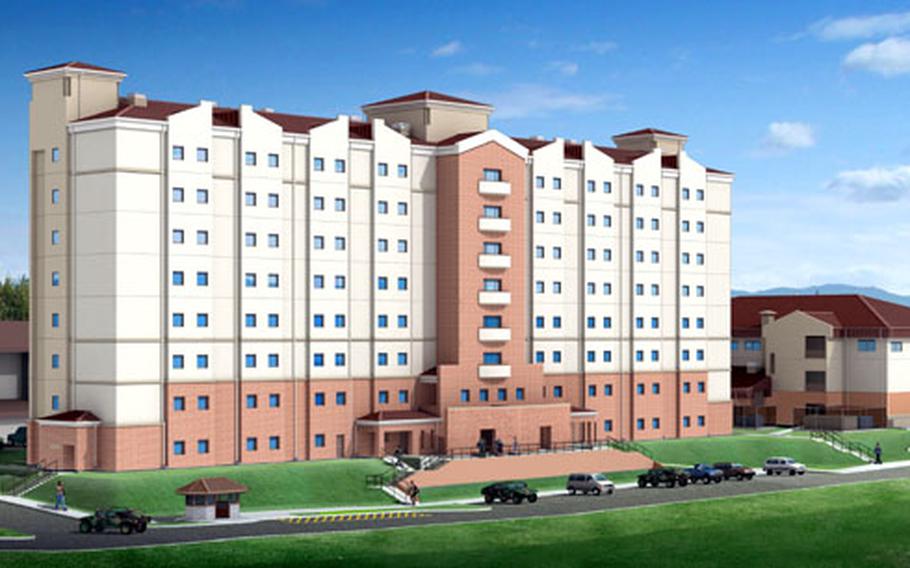 An artist’s rendering of the eight-story barracks and adjacent headquarters building scheduled to be built at the Army’s Camp Humphreys in South Korea. Construction on the $16.7 million project is to start next spring at the base, which eventually is to be enlarged into a major U.S. troop hub. (Courtesy of U.S. Army)

PYONGTAEK, South Korea &#8212; The U.S. Army in South Korea is set to build its tallest barracks on the peninsula &#8212; eight stories &#8212; and an adjacent headquarters building at Camp Humphreys, a helicopter base in central South Korea.

The barracks would be twice the four-story height of the Army&#8217;s tallest barracks elsewhere on the peninsula, officials said.

Construction is to start this spring on the buildings, which are to cost $16.9 million and go up on the 1,250-acre base&#8217;s western side, said Greg Reiff, with the U.S. Army Corps of Engineers Camp Humphreys office.

The first and second floors will be &#8220;duplex&#8221; style to house offices for two companies, one on either side of the building, Reiff said.

Outside will be &#8220;a cleanup area with platforms, gratings and places to connect hoses so you can wash down equipment and all,&#8221; he said.

The first floor will have an arms room and storage areas. The second floor will have the company administrative area, with offices for commanding officers, first sergeants and other headquarters personnel.

Brigade headquarters will be on the third floor.

The barracks will house 464 soldiers and will have six elevators, four in the building&#8217;s middle &#8220;and then one on each end, so that makes it more convenient for the soldiers,&#8221; Reiff said.

Each of the barracks&#8217; 232 rooms is designed for two occupants, will measure 336 square feet and will have a bathroom, shower, sink and storage closets. The rooms will be wired for cable TV and Internet access, Reiff said.

In addition to soldiers&#8217; rooms, plans for the first floor call for a large multipurpose room, two large laundry rooms, two &#8220;mud rooms&#8221; for soldiers to clean their gear after returning from the field, two small offices, a kitchenette and storage rooms.

The second through eighth floors will be of identical design. Besides soldiers&#8217; rooms, each will have a small laundry room, small lounge and a storage area &#8220;that kind of looks like dog kennels,&#8221; Reiff said. &#8220;You have chain-link bins&#8221; in which soldiers can lock up belongings.

The project is part of an ongoing push to get Camp Humphreys ready for its eventual role as a major troop hub for U.S. forces in South Korea, said Susan Barkley, spokeswoman for the Area III Support Activity at Camp Humphreys.

&#8220;We are building to meet the requirements of the type of units that we are anticipating having come to Camp Humphreys,&#8221; she said. &#8220;Having the barracks and the headquarters in the same vicinity ... allows for ease and convenience, as opposed to having many of the soldiers working on one side of the installation and billeting on the other side.&#8221;

The Shin Sung Engineering and Construction Co. Ltd. is to carry out the work under contract with the U.S. Army Corps of Engineers.

The Army also is building a six-story barracks at Camp Humphreys and the Air Force soon will open five-story quarters, called &#8220;dormitories,&#8221; at Osan Air Base, also in Pyongtaek.