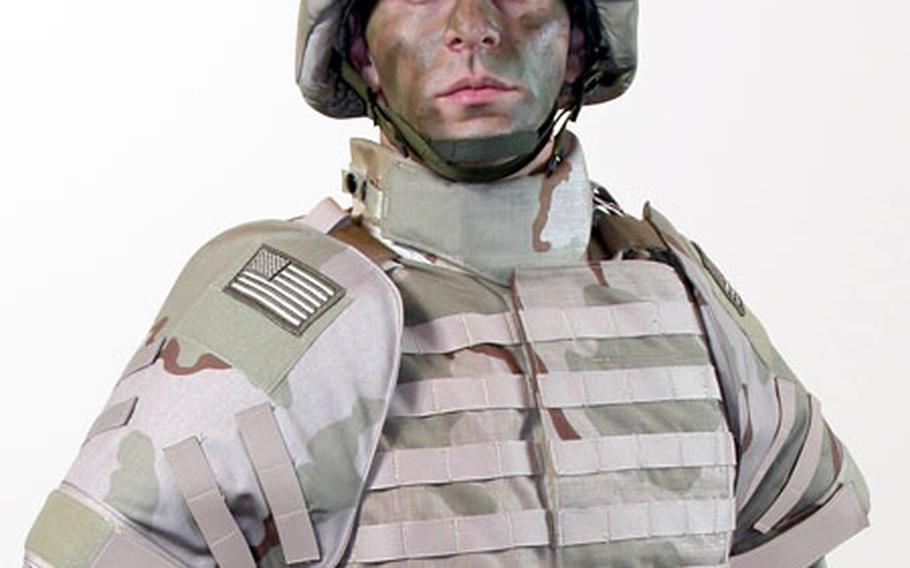 The new Deltoid and Axillary Protectors, designed to be attached to the Interceptor body armor, cover the upper arm and armpit. The Army plans to send 50,000 sets of the pads to Iraq in late September. (Courtesy of Point Blank Body Armor Inc.)

ARLINGTON, Va. &#8212; Soldiers in Iraq will start getting an addition to their Interceptor body armor systems this fall: a set of pads that cover and protect the upper arm and armpit area.

Dubbed Deltoid and Axillary Protection (the deltoid is the muscle that runs along the top of the upper arm; axillary refers to the area in or near the armpit), the detachable pads can stop penetration of shrapnel from a large fragmentary round, or a bullet up to 9 millimeter, Brig. Gen. James R. Moran said Monday at the Pentagon.

The pads&#8217; maker, Point Blank Body Armor Inc., which also is the sole producer of the Interceptor vests, is under contract to produce 132,000 sets of pads by June 2007, Moran said.

The Interceptor armor has proved highly effective at protecting troops&#8217; torsos, but the vests do not cover arms and legs.

Arm injuries are especially common, because like most passengers or drivers, soldiers have a habit of bracing or hanging their arms outside open vehicle windows as they roll along, Moran said.

The deltoid pads can help protect that vulnerable region against explosions or small-arms attacks on convoys, he said.

The pads also make it difficult for the wearer to raise his or her arms, which can affect both the ability to fire a weapon, and a soldier&#8217;s mobility. For example, during a raid, climbing in a window would be a challenge, Moran said.

A final drawbacks of the pads is that they completely cover the only area of the Interceptor vest where air can circulate underneath to help cool a soldier&#8217;s body, Moran said.

Given the drawbacks of attaching the deltoid pads to the vests, it will be up to troops and their leaders on the ground to decide when and where the protection they offer will be worth the problems they might cause.