Army tests drone-killing lasers as threat grows on the battlefield 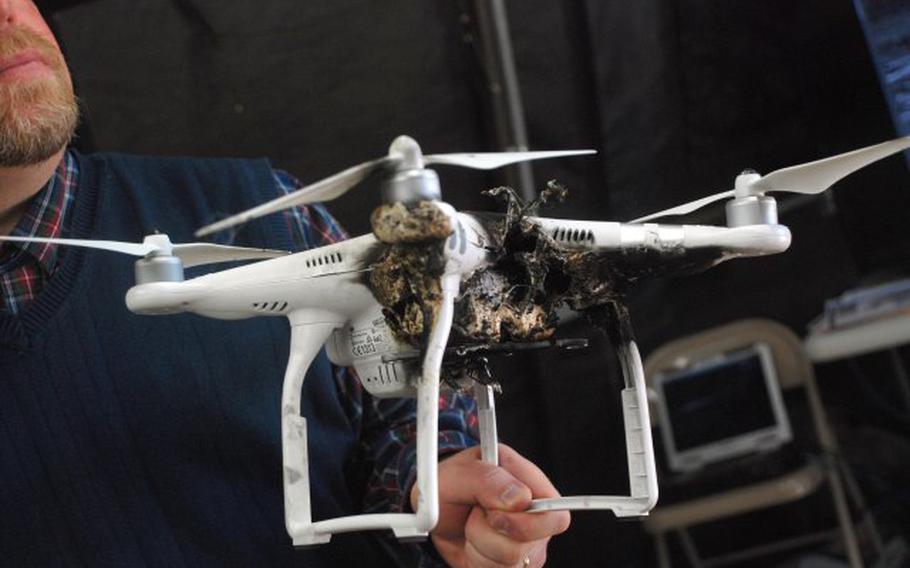 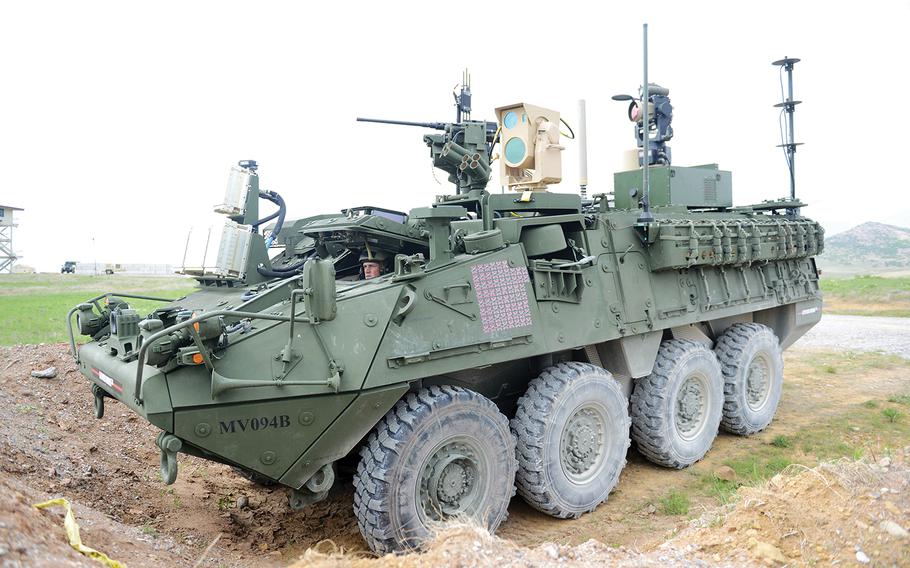 SAN ANTONIO — As Islamic State-piloted commercial drones complicate the offensive in Mosul, sending Iraqi troops scattering as grenades and bomblets rain down, the Army has field tested vehicle-based lasers to combat the growing threat of enemy eyes in the sky.

Infantry-carrying Stryker vehicles mounted with the Mobile High Energy Laser, a 5-kilowatt beam that scrambles the circuits of drones, took part in demonstrations at the Maneuver Fires Integration Experiment at Fort Sill in Oklahoma, a 10-day exercise that ended last week.

The system includes radar detection and a camera to visually track aircraft on a screen, where an operator targets the drone with the laser. A “hard kill” will disable the drone mid-flight and send it crashing to the ground, the Army said. A “soft kill” occurs when the laser severs the communications link between the drone and its ground control station.

“[Then] we can send artillery after the ground control station,” Lt. Col. Jeff Erts of the Fires Battle Lab at the Fires Center of Excellence at Fort Sill said in an Army story about the exercise.

In all, 50 drones were brought down during the exercise, the story stated.

The laser, which does not emit a sound when it pulsates, is the centerpiece of an experimental Stryker variant used during the field exercises.

It is mounted atop the 16.5-ton infantry vehicle where a .50 caliber machine gun or Mk 19 automatic grenade launcher would be, outside the vehicle commander’s hatch. An M240B machine gun replaces that weapon, according to an Army video demonstrating the vehicle.

The counter-drone mission has been given to reconnaissance units, a soldier in the video said.

Future useIt remains unclear how effective the weapon could be in operations against larger, more sophisticated unmanned aircraft used by conventional militaries, whose signals could be better protected as the aircraft fly much higher than commercial drones.

While lasers maintain their energy over long distances, atmospheric and weather conditions could affect their ability to scramble more powerful, heavier military-grade unmanned aircraft, said Paul Scharre, a former unmanned system policy official at the Pentagon and director of the Future of Warfare Initiative at the Center for a New American Security, a Washington think tank.

Those aircraft might require more power to affect their systems than the 7-horsepower beam currently used by the Mobile High Energy Laser, he said.

Two variant vehicles with anti-drone capabilities were deployed to Europe in March for testing with an active unit, the Army said in a news release.

The Army holds ongoing exercises with NATO allies in Europe in an effort to curb Russian aggression, including their incursion into Ukraine, where U.S. troops advise Ukrainian troops engaged in battles with Russian-backed separatists.

Both sides use drones for reconnaissance missions, with Ukrainian troops unhappy with the performance of U.S.-supplied and hand-launched Raven RQ-11B drones, which are vulnerable to hacking, Reuters reported in December.

Successful tests of the mobile lasers is a significant step after decades of questions and theories about how direct-energy weapons could be used in battle, Scharre said.

Power requirements and the time taken between shots are key limitations of direct-energy weapons, Scharre said. He likened batteries to rifle magazines, with laser firings depleting a battery until they need to be swapped out, he said.

Batteries mounted externally power the mobile lasers and can be recharged by the vehicle, Monica Gutherie, Army spokeswoman at Fort Sill, said Wednesday. There also is technology in the works to use the vehicle’s power source directly.

During the exercise last week, soldiers brought down drones as fast as a few seconds after engaging them, Gutherie said, though the 50 drone kills were spread out over ten days.

Scharre said a big consideration is if the weapon can quickly down aircraft and move on to other targets in a scenario where drones swarm an objective.

Off-the-shelf hobbyist drones have reshaped the battlefield and introduce strategic headaches in Iraq and Syria, as small bomblets or grenades modified with badminton-like fins are dropped on Iraqi troops and vehicles in a new wave of improvised warfare, killing and injuring dozens.

Army officials could not be reached to explain whether the Mobile High Energy Laser has operational use among Iraqi or U.S. troops in the ongoing fight against ISIS. Peter Singer, a defense analyst, posted a Twitter photo of an anti-drone rifle at a U.S. firebase in Iraq last July, raising the likelihood coalition troops have fielded drone-scrambling technology there.

Once the technology of sophisticated militaries, fairly inexpensive remote-pilot aircraft have recently given militants the ability to project power in the air. The threat has emerged following more than a decade of U.S. and Iraqi air supremacy now eroded by drones as light as 20 pounds take to the skies.

ISIS fighters first used drones to locate Iraqi troop positions. But their use of armed drones in recent months in Mosul and elsewhere have led to a threefold use: reconnaissance, aerial bombardment and propaganda, as cameras fixed on the bomber drone film the attack alongside other drones flying nearby to record the carnage.

Air Force Col. John L. Dorrian, spokesman for the U.S.-led coalition opposing ISIS, downplayed the significance of the threat of insurgent drone use in February.

“Although dangerous, and effective as a propaganda tactic, it has limited operational effect on the battlefield and will not change the outcome,” he said.

However, videos posted to Twitter and Facebook show troops running for cover as drones buzzed nearby, with others aiming conventional weapons to bring them down. In one video, Iraqi security forces shoot at drones with machine guns and rifles in an effort to disable them.

It might take as long as a century before direct technology is perfected and laser weapons are wielded in a way that alters the battlefield landscape, Scharre said, but the technology is maturing. Only two years ago, these weapons were more appropriately staged on warships and big trucks and not add-ons to existing vehicles in a combat unit, he said.

“Instantaneous effects and perfect accuracy with unlimited magazines completely changes the way we think about munitions in combat,” he said. “This is the first step.”