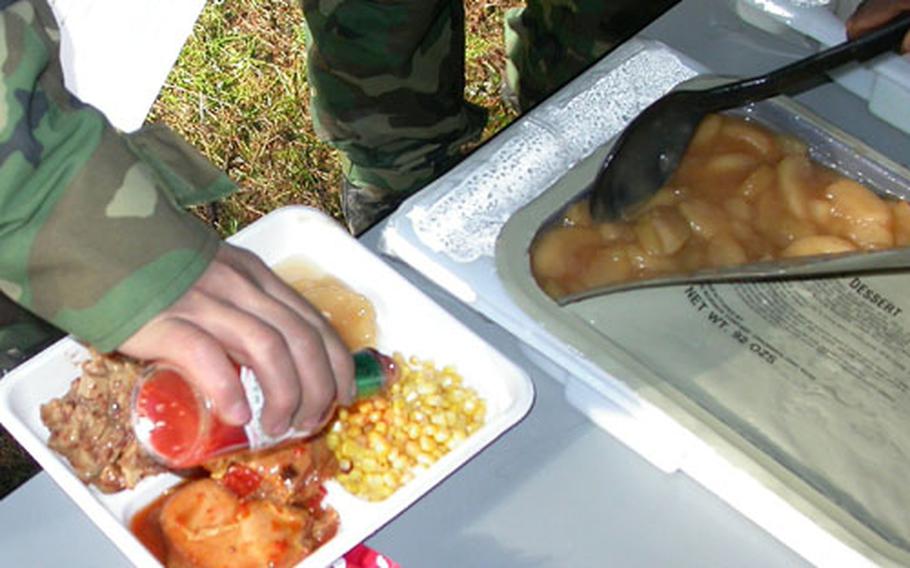 The Remote Unit Self Heating Meal (RUSHM), or "Kitchen in a Carton," provides everything needed to feed up to 18 troops in one tidy package. Dinner is served on a small tray during a technical demonstration at Fort Lewis, Wash., in December. (U.S. Army photo)

Remember your lunch box sending plumes of steam roiling over the playground?

That steaming parcel would be a new &#8220;group lunch box&#8221; under development by the Department of Defense Combat Feeding Directorate at the U.S. Army Soldier Systems Center in Natick, Mass.

The box is actually a carton packed with food, condiments and serving ware. Built-in heaters warm the food without stirring or supervision, &#8220;so soldiers can go off and do other things and come back to a hot meal,&#8221; according to Peter Lavigne, a chemical engineer on the Equipment and Energy Team.

The &#8220;Remote Unit Self Heating Meal&#8221; or &#8220;kitchen in a carton,&#8221; as its developers call it, is designed to be used by small groups of soldiers on patrol, or performing other missions that take them far from their unit&#8217;s field kitchen, Lavigne said in a Monday telephone interview.

The food carton eliminates the need for soldiers to carry MREs, &#8220;reduces weight and waste, and takes the [food] load off soldiers&#8217; backs and puts it in the back of a truck,&#8221; Lavigne said.

The new meal also satisfies the very human desire to gather together for meals in groups, Lavigne said.

The current instruction sheet for the cartons is almost comically simple. Along with a few cautions that include not to drink the heating water and that contents are &#8220;hot!&#8221; after heating, there is all of one step for soldiers to take: &#8220;Pull activator tab to release water to heaters.&#8221;

As for the steam &#8212; well, the engineers are working to reduce that, Lavigne said, both to reduce visibility and to improve heat management.

The first soldiers to field-test the cartons &#8212; 35 Rangers at Fort Lewis, Wash., during two days in December &#8212; loved the simplicity, Lavigne said.

Although the technology that goes into the cartons is pretty well established, the meals won&#8217;t be fielded until 2006, Lavigne said.

That&#8217;s because several questions aren&#8217;t settled yet, including the optimal number of servicemembers the box should feed (between 12 and 18); and whether the box should include the activation water, and so be totally self-contained, or have users add it separately, cutting down on weight.

Natick food specialists are also busy designing menus for the cartons that are likely to include new and improved breakfast foods &#8212; in particular, better-tasting eggs, Lavigne said.

The next step for the cartons &#8220;is a much longer field trial,&#8221; with at least 100 soldiers, which will take place this spring, probably with the 3rd Infantry Division at Fort Stewart, Ga., Lavigne said.