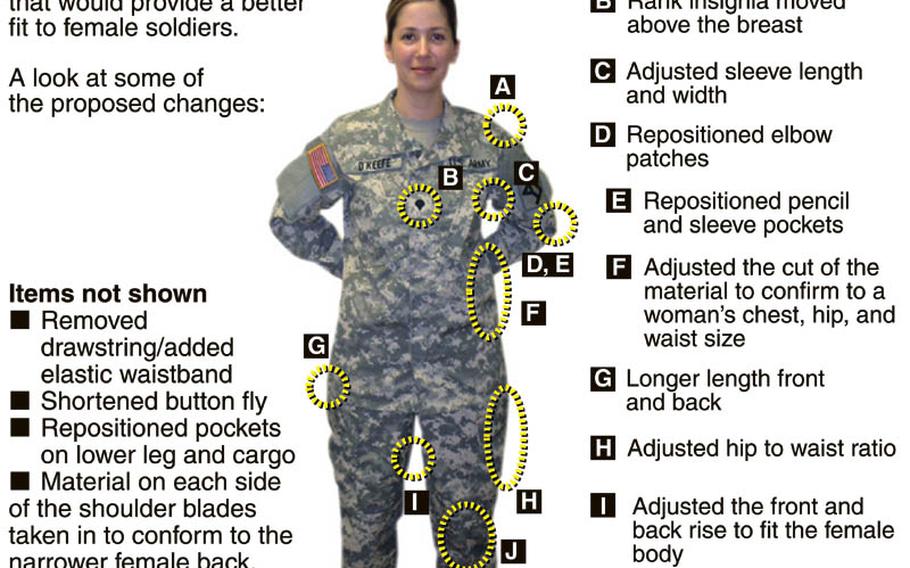 The new uniforms should be available in the next two to three years, according to Maj. Sequana Robinson, the assistant product manager for uniforms at Program Executive Office Soldier. &ldquo;It is not a form-fitting uniform &mdash; it does not show off any curves or anything,&rdquo; Robinson said. &ldquo;It is just a better fit for the female body. It sets off a more professional look.&rdquo;

Changes to the uniform were made following recommendations of female soldiers during preliminary testing and research phases made by the PEO team.

The current uniforms don&rsquo;t fit female soldiers as well as the Army would like, according to Lt. Col. Mike Sloane. Sloane is the product manager for soldier clothing and individual equipment at PEO Soldier. Most of the improvements are being made in the sizing of the uniforms, such as narrowing the shoulder width or adjusting sleeve lengths.

Additionally, the new uniform pants will include an elastic waistband.

&ldquo;I think it is great that the Army is finally doing some adjustments on the uniform to accommodate the different build of female soldiers,&rdquo; said Capt. Monika Comeaux, stationed in Bamberg. &ldquo;I am looking forward to seeing these items fielded/available for sale.&rdquo; The improvements can be immediately felt once you try on the uniform, Robinson said.

&ldquo;Oh my God!&rdquo; she said. &ldquo;I do not have all the extra material hanging off of me.&rdquo;

Small things, like putting pens in the pen compartments on the sleeves and accessing pockets, have been made much easier with the new uniform, Robinson said.

Originally, most females just saw these problems and drove on, Robinson said. After the units testing the uniform got a chance to wear them, they began to ask, &ldquo;How can I get one?&rdquo;

The Army testing board, which hasn't yet approved the changes, will be presented with a report on the uniform soon.

When the new uniforms come online, the Army will have more than 70 combinations of sizes for coats and trousers, Sloane said. &ldquo;We expect everyone to fit into one or more combinations of those sizes.&rdquo;

Army regulations will have to be changed to ensure the proper wear and appearance once the new female uniform is approved, Sloane said.