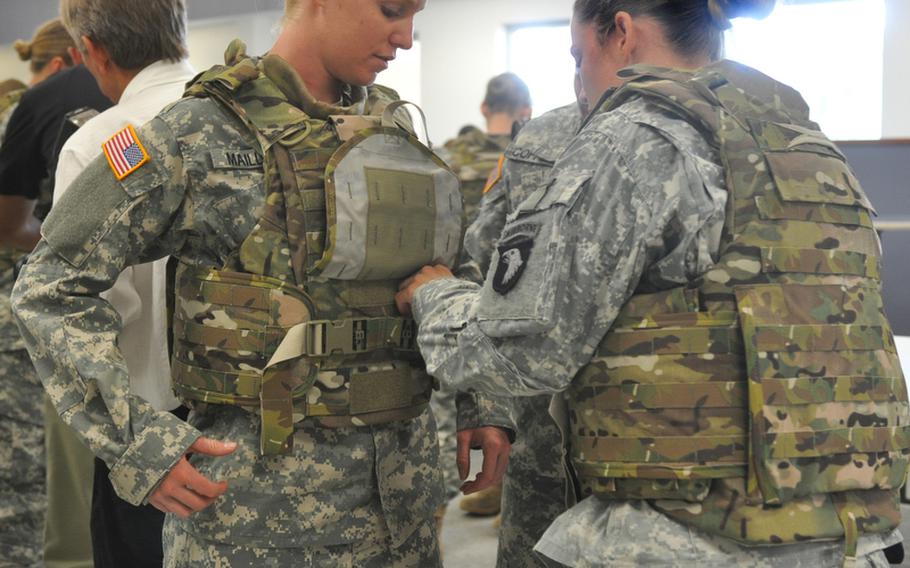 Spc. Arielle Mailloux gets some help adjusting her protoype Generation III Improved Outer Tactical Vest from Capt. Lindsey Pawlowski, Aug. 21, 2012. Both Soldiers are with the 1st Brigade Combat Team Female Engagement Team, 101st Airborne Division (Air Assault). These prototypes designed specifically for the needs of female soldiers, with shorter torso length and other improvements, are being fielded at Fort Campbell, Ky., for the next few weeks. (Megan Locke Simpson/U.S. Army)

Spc. Arielle Mailloux gets some help adjusting her protoype Generation III Improved Outer Tactical Vest from Capt. Lindsey Pawlowski, Aug. 21, 2012. Both Soldiers are with the 1st Brigade Combat Team Female Engagement Team, 101st Airborne Division (Air Assault). These prototypes designed specifically for the needs of female soldiers, with shorter torso length and other improvements, are being fielded at Fort Campbell, Ky., for the next few weeks. (Megan Locke Simpson/U.S. Army) 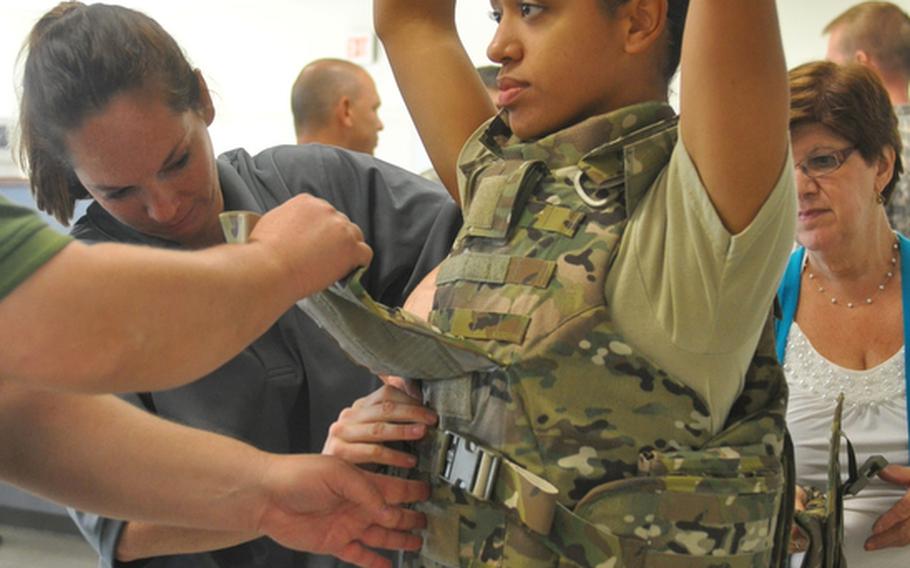 Nineteen female Soldiers with the 101st Airborne Division (Air Assault) are fielding prototypes for a more female-friendly Improved Outer Tactical Vest. Pictured here is the more form-fitting vest, which is meant to eliminate issues involving gaps near the underarms, along with other problems female soldiers face with previous models of the vest. Officials hope to start mass production of the new vest by next summer. (Megan Locke Simpson/U.S. Army)

Nineteen soldiers training this week to deploy to Afghanistan were sporting the newest thing in the Army&rsquo;s defensive arsenal: body armor strong enough for a man, but made for a woman.

The 1st Brigade, 101st Airborne Division soldiers at Fort Campbell, Ky., are to be the judges of the new vests now in prototype. Authorities hope they will provide a safer, more comfortable fit to the 14 percent of active duty troops who are women, and who for years have been wearing body armor designed for men.

Would the new &ldquo;Improved Outer Tactical Vests&rdquo; &mdash; shorter in the torso, narrower in the shoulders, darted in the bust and with a narrower but adjustable waist &mdash; pinch, gap, bell or otherwise fail in form, fit and functionality?

It was too soon to tell, said Libby Richardson, of the U.S. Aberdeen Test Center, who is leading the field test. &ldquo;It&rsquo;s the first day,&rdquo; she said Tuesday, of a testing period that will last a couple of weeks.

But Capt. Lindsey Pawlowski, veteran of two deployments in the usual body armor, seemed pleased. &ldquo;I can sit down in it,&rdquo; she said. &ldquo;I can run in it easier.&rdquo;

The discomforts of the standard vest made it tougher to do the job, said Pawlowski, who is 5 feet 4 inches tall. &ldquo;Anybody who&rsquo;s short like me, it&rsquo;s, &lsquo;Oh, God, why?&rsquo; &rdquo;

Pawlowski and the 18 other soldiers testing the vests are to be on the brigade&rsquo;s Female Engagement Team, seeking to interact with Afghan women, when they deploy in November.

As they train, it will become clearer, Richardson said, if the new body armor under development for the past couple of years addresses shortcomings of the &ldquo;unisex&rdquo; body armor designed with male bodies in mind.

The vests were too long in the torso for many women, who tend to have shorter torsos and longer legs than men of the same height, leaving a dangerously exposed gap under the arms. They also hit women in the hips or rode up in the back when women were seated, in Humvees, for instance.

The vests&rsquo; shoulders were often too wide for women, making it difficult for female soldiers to &ldquo;weld&rdquo; their weapons into their shoulders to shoot, and constricting arm movement.

And because many women had to size up to accommodate their busts, they &ldquo;tended to get the bell effect,&rdquo; said Lt. Col. Frank Lozano, at Program Executive Office Soldier, the Army agency which, along with Natick Soldier Systems Center, develops and tests new Army equipment.

The new sizing proved a challenge to design, Lozano said.

&ldquo;I think the hardest part was figuring out how to dart the vest in the bust area and adjust the cut of the shoulder area that provided coverage and also allowed for movement,&rdquo; he said.

Then there was the matter of what to do about the armor chest plate, which in the standard vest is positioned inside, and so could also press uncomfortably on female breasts.

The plate was moved to a new outside pocket. &ldquo;It still covers the vital organs but it sits at more of an angle,&rdquo; he said. They also are sized to the vest and tend to be more than a pound lighter.

The women&rsquo;s body armor at this point comes in eight sizes, Lozano said, and part of the field test is to determine whether that&rsquo;s enough or too much. &ldquo;Part of our assessment is affordability,&rdquo; Lozano said. &ldquo;What&rsquo;s affordable and what makes sense?&rdquo;

Women have generally made do with the smallest sizes up to about the medium, Lozano said.

The 101st soldiers will get to keep the new body armor as long as they&rsquo;re with that unit. Others will have to wait longer.

After the 101st soldiers provide their assessments in the coming weeks, the vests will go into final design review, Lozano said, followed by the manufacture of 3,000 of them. After final testing, new vests will be fielded to a brigade to be chosen next summer.

After that, it&rsquo;s up to the Defense Logistics Agency, Lozano said, to equip female soldiers with the new vests.