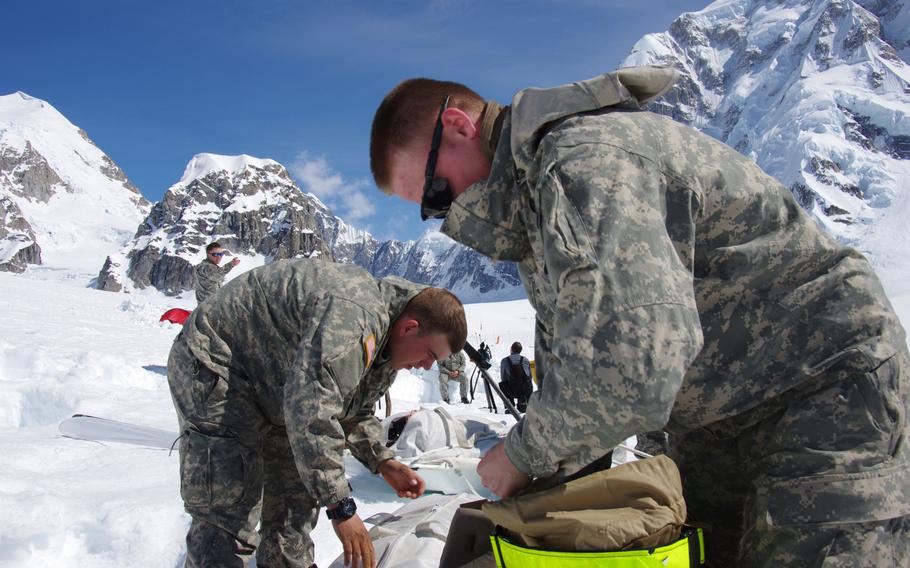 Soldiers from Team 1, assigned to the 1st Stryker Brigade Combat Team, 25th Infantry Division, ready equipment at the Kahiltna Glacier Base Camp, Alaska, in late May. From this base camp at 7,600 feet, the soldiers are climbing for several weeks in an attempt to reach Mount McKinley's peak at 20,320 feet. (Alan Brown/U.S. Army)

Soldiers from Team 1, assigned to the 1st Stryker Brigade Combat Team, 25th Infantry Division, ready equipment at the Kahiltna Glacier Base Camp, Alaska, in late May. From this base camp at 7,600 feet, the soldiers are climbing for several weeks in an attempt to reach Mount McKinley's peak at 20,320 feet. (Alan Brown/U.S. Army) 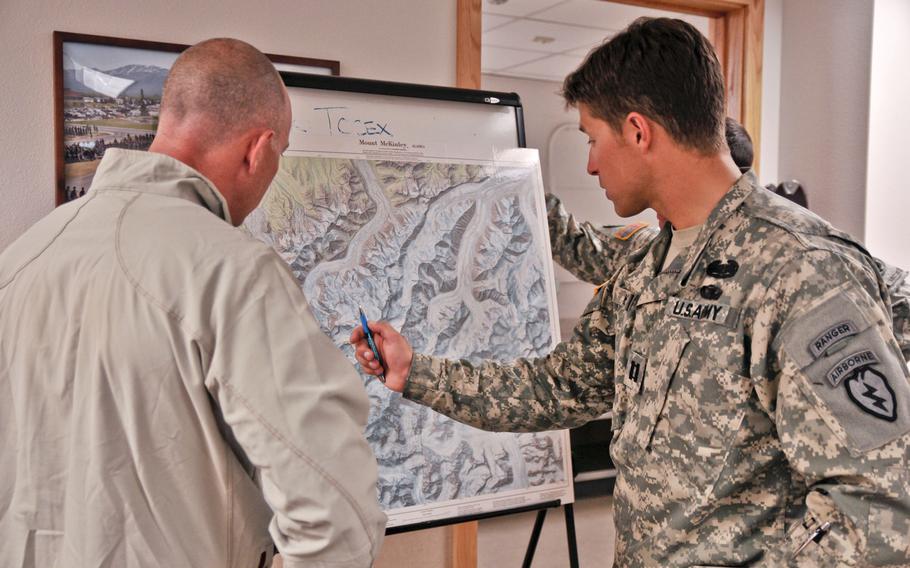 Capt. Matthew Hickey, leader of climbing Team 2, points to a map of Mount McKinley with another member of the expedition team at the Spartan Brigade's headquarters on Joint Base Elmendorf-Richardson, Alaska, on May 22, 2014. (Eric-James Estrada/U.S. Army) 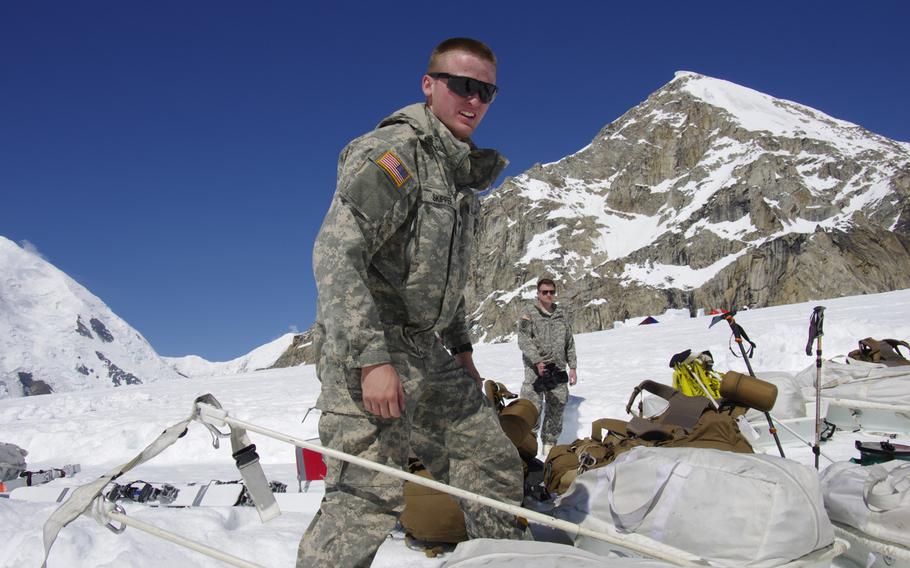 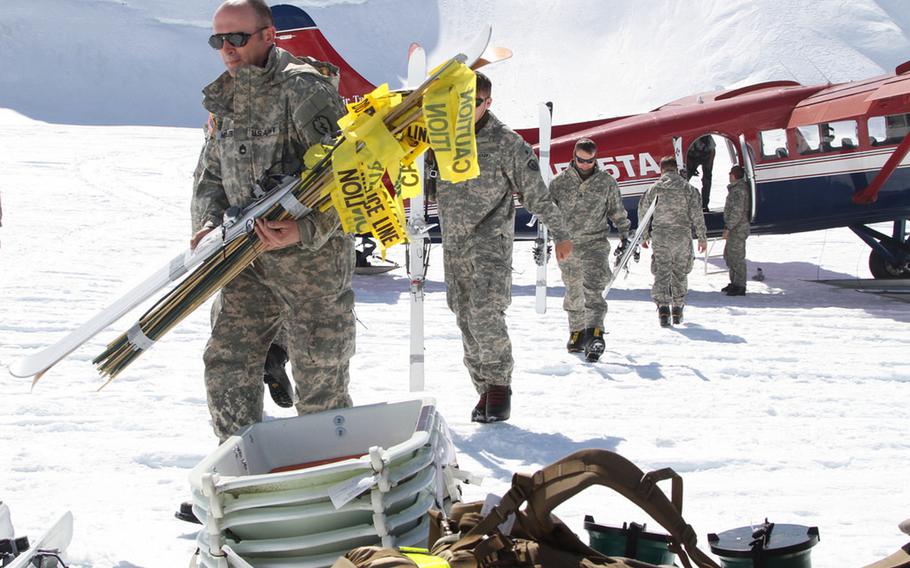 Members of the 1st Stryker Brigade Combat Team, 25th Infantry Division, climbing team unload supplies at Kahiltna Glacier Base Camp on May 21, 2014. The team will to spend up to three weeks, ascending more than 13,000 feet in some of the most severe conditions in Alaska in an attempt to summit Mount McKinley. (Mylinda Durousseau/U.S. Army) 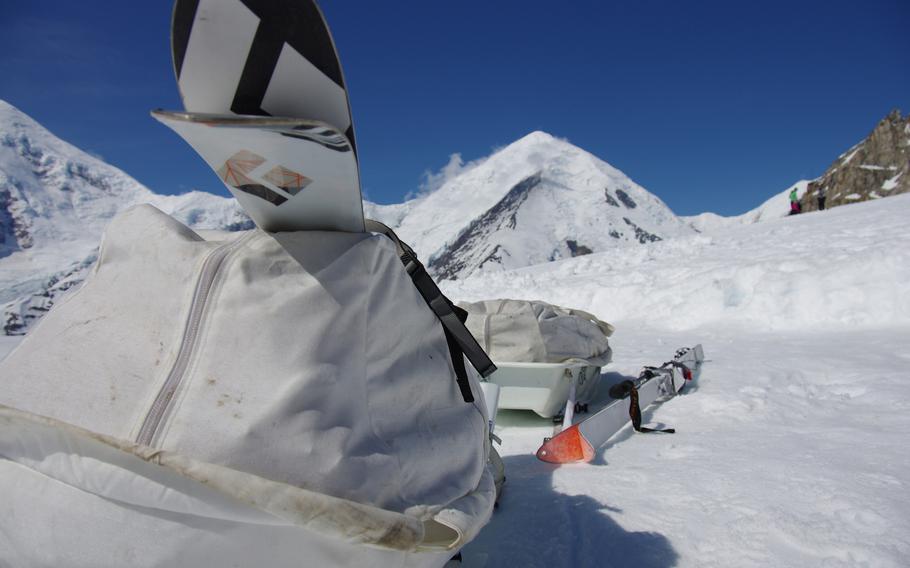 Soldiers from Team 1, assigned to the 1st Stryker Brigade Combat Team, 25th Infantry Division, on the Kahiltna Glacier Base Camp on May 21, 2014. The team is attempting to the climb to the summit of Mount McKinle (Alan Brown/U.S. Army)

While some people see climbing mountains as an expensive risk, two teams of soldiers are demonstrating its practical gains.

The teams — primarily from the 1st Stryker Brigade Combat Team of the 25th Infantry Division — are scaling Mount McKinley, the tallest peak in North America, to test their skills and new equipment.

“We’re here to validate our Arctic training and represent the United States Army and show that [U.S. Army Alaska] is No. 1 for Arctic training,” Spc. Matthew Tucker, with the 40th Cavalry Regiment of the 4th Brigade Combat Team, told reporters by phone from a base camp at about 9,600 feet.

Tucker is part of the eight-member Team 2, which arrived by plane at McKinley’s base this week. Team 1 got a much earlier start in May, but bad weather had its members hunkering down for about five days last week. Skies have been clear this week.

Most of the soldiers have not climbed McKinley before.

“I’m learning a lot about Arctic training, Arctic survival, expedition-style camping, expedition-style movement,” Tucker said. “If we don’t all make it to the summit, we’re going to be pretty disappointed. But we all want to make it back safely, too.”

If all goes as planned, they’ll reach the summit on day 14 of the climb, Tucker said.

Tucker estimated a couple hundred mountaineers were in the midst of making the climb. The annual window for ascending McKinley is small — May to July.

At 20,320 feet, McKinley is about 9,000 feet shorter than Mount Everest, mountaineering’s holy grail. But the Alaskan peak holds plenty of its own dangers, with treacherous crevasses and rock slides below 14,000 feet. Awaiting above are strong winds, frostbite and thin air.

Four deaths have been recorded in the last two years, three from falls and one from a heart attack.

Capt. Matthew Hickey, the leader of Team 2 with the 4th Infantry Brigade Combat Team, said during a call this week that he was “sitting next to our kitchen tent with four stoves blazing” while surrounded by hundreds of mountain range peaks “intermixed with all the black and white of the ice.”

Daytime temperatures were generally in the 20s, he said, but the “oven effect” of the sun reflecting off snow can make it seem warmer, he said. It drops to around zero at night.

The teams are trying out new equipment and apparel. For instance, U.S. Army Alaska uses skis nicknamed the “white rocket,” Hickey said, which are “not a very compatible ski for long-distance skiing,” supplemented with both “mountaineering” skis and alpine-touring skis.

They’ve also adapted the usual 10-man ahkio sled into a single-size sleigh. “We have individualized ahkio sleds so each soldier can be self-sufficient,” Hickey said.

It’s the first time some of these items have gone up McKinley with soldiers, he said.

U.S. Army Alaska climbing teams have ascended the summit via the so-called “West Buttress” route — the most popular with mountaineers — about 16 times in the past 35 years, according to an Army statement.

The teams are chronicling the ascent on Facebook, where one follower recently commented that such climbs are a waste of time and money.

Hickey disputed that harsh assessment: “There’s no other unit in the United States Army that is required to operate in an environment such as this. Soldiers in U.S. Army Alaska are required to deploy and operate not only in training but in a combat environment in a snow-bound, extremely cold, possibly glaciated environment.

“So in the event our nation calls upon us to go to war or to defend our nation in other capacities in environments such as this, we’re ready — or at least we know what changes we need to make in order to be ready.”