Army team works under the radar ... and underwater 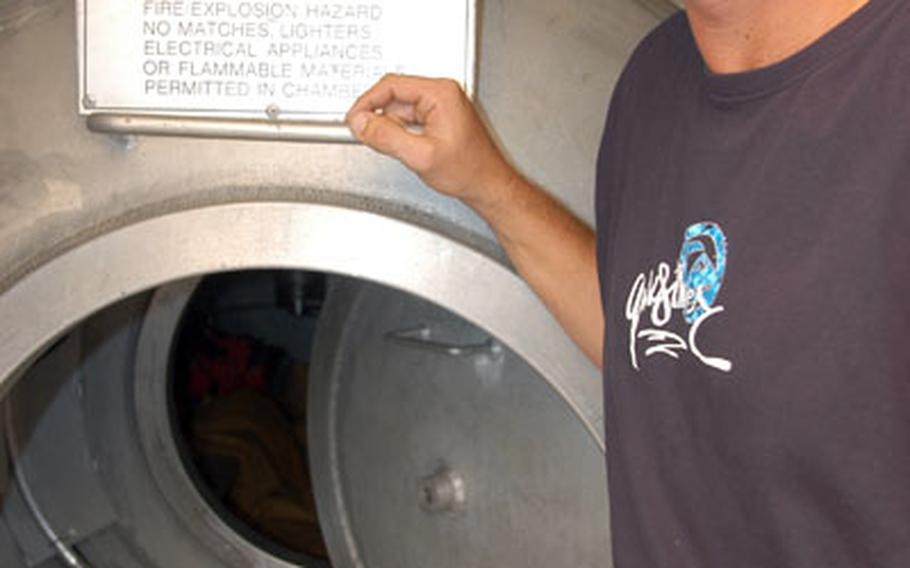 Staff Sgt. Joshua West, a diver with the Army’s 544th Engineer Team (Dive) in Kuwait, stands by one of two decompression chambers located at Camp Patriot, Kuwait. As the only team of Army divers operating in Central Command, the soldiers often conduct missions in Iraq that include aircraft and body recovery, bridge demolition, reconnaissance and removal. (Jennifer H. Svan / S&S)

West, 30, of Morehead City, N.C., is one of about 20 divers with the 544th Engineer Team (Dive) deployed to Kuwait from Fort Eustis, Va. As the only Army dive team in Central Command, the soldiers are often called to Iraq for missions such as body and aircraft recovery.

In their 10 months downrange, the divers have removed a pier as well as destroyed bridge sections. They have done maintenance on the Iraqi oil platforms in the Persian Gulf and inspected bridges spanning Iraqi rivers to ensure they&#8217;re safe for coalition forces. They salvaged an unmanned aerial vehicle after it sank into a reservoir on Camp Slayer in Iraq.

The team&#8217;s most challenging mission has been recovering two Marine Cobra helicopter pilots from a remote lake in Taqaddum, Iraq, Darrow said. The Marines were trapped in the airframe after the chopper crashed and sank during a maintenance flight in May. The dive team searched for 72 hours before finding them and needed five more days to salvage the helicopter, Darrow said.

Recovering the aircraft was difficult, Darrow said. The team had to put a crane on bridge sections and float the crane to the middle of the lake in order to lift the chopper out of the water.

&#8220;The water was a cloudy clear about 30 feet deep,&#8221; Darrow said, &#8220;and the team was using lift bags to bring the helicopter off the bottom. The biggest danger is the helicopter suddenly getting too buoyant and accelerating to the surface with the diver attached, which could possibly kill the diver.&#8221;

The Army divers also searched for a Marine and sailor who went missing after their 7-ton truck flipped in a river on April 2 after a flash flood near Asad, Iraq; six Marines drowned and were found the next day.

Divers searched for the missing for eight days, covering more than 12 miles of river. The bodies were found more than 75 miles downstream by local Iraqis and returned to U.S. forces, Darrow said.

Back in Kuwait, the divers manage the only two authorized decompression chambers for U.S. military personnel in Iraq and Kuwait. So far only one has been used, by an American contractor in Kuwait who fell ill after a scuba-diving trip to Thailand.

Darrow said the Army divers are a proud, tight-knit group, with only about 120 soldiers and five dive teams throughout the service.

West didn&#8217;t know the Army sent soldiers underwater until he read about Army diving in an engineering magazine. &#8220;I wanted something that was challenging and something that not everybody else could do,&#8221; he said.