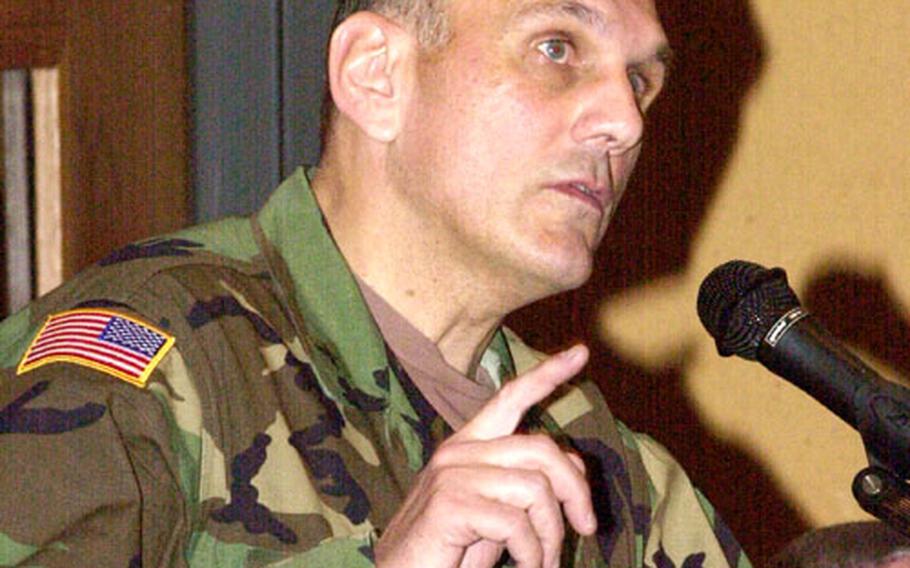 YONGSAN GARRISON, South Korea &#8212; Allowing soldiers to stay on active duty while attending the seminary is one new initiative to address growing shortages in the Army&#8217;s chaplain corps, the deputy chief of chaplains said Monday.

Brig. Gen. Jerome Haberek, in the midst of a seven-day visit to troops in South Korea, said Army officials are also trying to stop the &#8220;graying&#8221; of the corps by targeting younger soldiers to become chaplains through educational loan repayment programs.

According to Army statistics, nearly 80 percent of active-duty chaplains are older than 45.

The biggest needs, Haberek said, are for female and Roman Catholic chaplains. Last year the Army recruited only 25 new female chaplains, service data show. Though that number is up from 15 in 1999, officials want it boosted further.

Officials also want greater diversity within the corps. In the Army, for example, blacks make up 25 percent of the total force but only 10 percent of the chaplain corps.

Standards for the Army are different from those in other services, Haberek said. Chaplains rotate between unit assignments, where they could wind up ministering to battlefield casualties, and garrison assignments, where it is more likely they would be tending to families and social groups.

But the bottom line is getting more young soldiers to think about becoming chaplains, he said. &#8220;If a soldier is thinking about the vocation and is hearing the call, visit your unit chaplain and begin that process and that dialogue,&#8221; Haberek said.

Earlier Monday, Haberek gave the keynote address at Yongsan&#8217;s version of the National Prayer Breakfast. Haberek emphasized &#8220;Army values&#8221; in his remarks, focusing on courage both in combat and in peacetime operations.

He recounted his almost daily visits with soldiers, casualties of battles in Iraq and Afghanistan, at Walter Reed Army Medical Center in Washington.