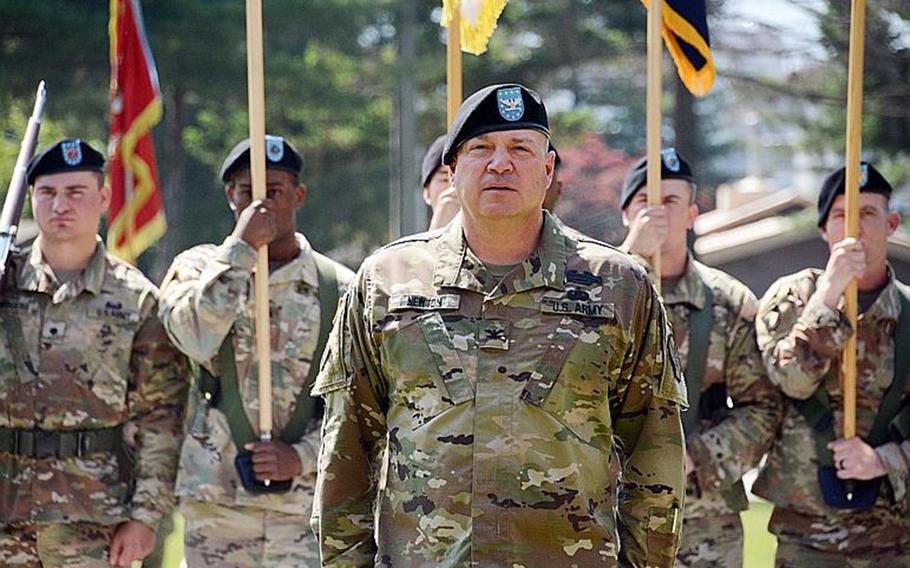 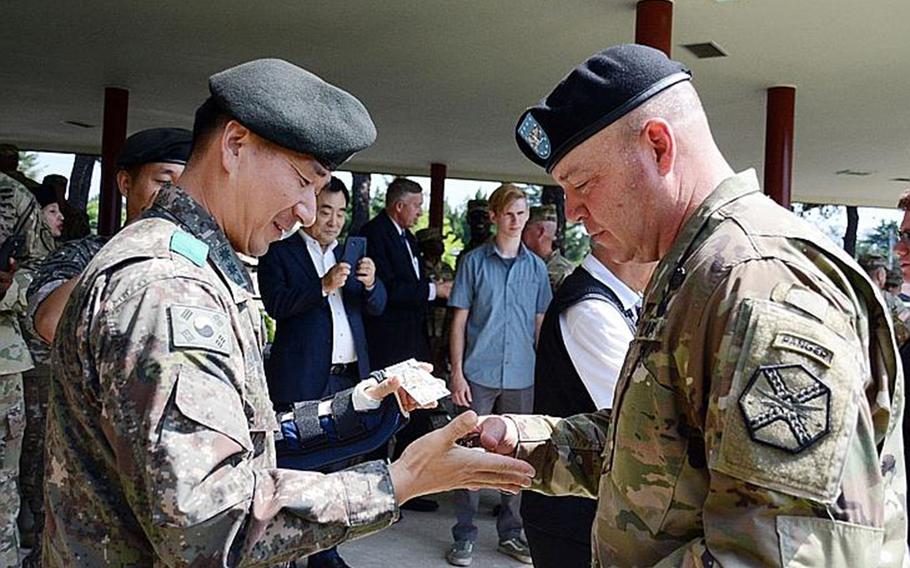 CAMP RED CLOUD, South Korea – Soldiers stood in formation as the garrison’s colors were cased Thursday in a ceremony officials said marked an important step toward closing this Korean War-era base and reducing the U.S. footprint north of Seoul.

The inactivation of Camp Red Cloud, which remains home to the 2nd Infantry Division, was a largely administrative move aimed at consolidating resources as the Army steps up much-delayed plans to move most forces to its new hub in the southern half of the country.

But Col. Brandon Newton, who served for the past two years as the final garrison commander of the area that includes Red Cloud and Camp Casey, stressed the process was well underway.

“The details of the way that we return bases are more complex than just the casing of the colors,” he said in an interview after the ceremony on the parade ground. “We’re certainly on the lead edge of what I would consider the vacating of Camp Red Cloud. Vacating and closing a camp is about a year’s process.”

The base in the town of Uijeongbu, which was home to the real-life unit that inspired the popular TV show M.A.S.H., was named in 1957 in honor of Medal of Honor recipient Cpl. Mitchell Red Cloud Jr., who was killed during a Chinese assault in the first year of the 1950-53 Korean War.

Red Cloud — where soldiers still live in aging Quonset huts — has long been an anchor in a web of bases and outposts near the front lines with North Korea.

It has undergone many changes in the past, transforming from a hardship duty station to one fit for families with a school and childcare and more recently back to an unaccompanied post.

The 2ID headquarters will remain at Camp Red Cloud for the foreseeable future while its new headquarters and apartment-style barracks are completed on Humphreys, officials said, reluctant to give a timeline after many delays.

Several units already have made the move. The military also is shutting down Camp Stanley, although the larger Camp Casey will remain open as the home to the 210th Field Artillery Brigade and other residual forces.

“We are still occupying and have an operational requirement for Camp Casey,” Newton said.

“Camp Stanley is in what I would call the vacate process right now,” he added. “We are still removing furniture, turning off power, turning off water. We are responsibly removing many of the heating oil from the tanks.”

The U.S. military has long grouped its bases in South Korea into four areas for administrative purposes but is consolidating the commands as the relocation gains momentum.

Camp Red Cloud will fall under a newly designated U.S. Army Garrison Yongsan-Casey, which will be commanded by Col. Monica Washington beginning Friday when she takes over from the current Yongsan commander Col. Scott Peterson.

Newton, who will move with his family to Denver to be the regional defense coordinating officer for FEMA, said the restructuring was necessary to shift more personnel to Camp Humphreys, which is in the rural Pyeongtaek area about 40 miles south of the capital.

“The last two years have been marked by major change … coupled with the tumultuous, to say the least, operational environment,” he said in remarks to military officials and local dignitaries in the audience. “There are still tough days ahead to continue to move units and reduce the work force.”

He also said Camp Jackson and Camp Mobile were ready to be handed over to the South Korean government but no date has been set.

Christine Altendorf, the director of Installation Management Command for the Pacific, praised Newton for leading the garrison during a time of transition.

“As we look back on this relatively brief time period of his command, we marvel at the staggering pace he set as more than 8,500 personnel along with equipment vacated, consolidated and moved from here to U.S. Army Garrison Humphreys,” she said.

“Even with the ongoing transformation effort Col. Newton maintained a commitment to the quality of life of every single person here, replacing ineffective water treatment facilities, enhancing barracks and focusing on energy conservation and efficiency,” she said.

Two Uijeongbu officials, who spoke only on condition of anonymity, said they had heard Camp Red Cloud would be closed by the end of the year. City officials were tentatively planning to develop the land as a security-themed tourist complex but were waiting to see how much environmental cleanup would be needed, they said.