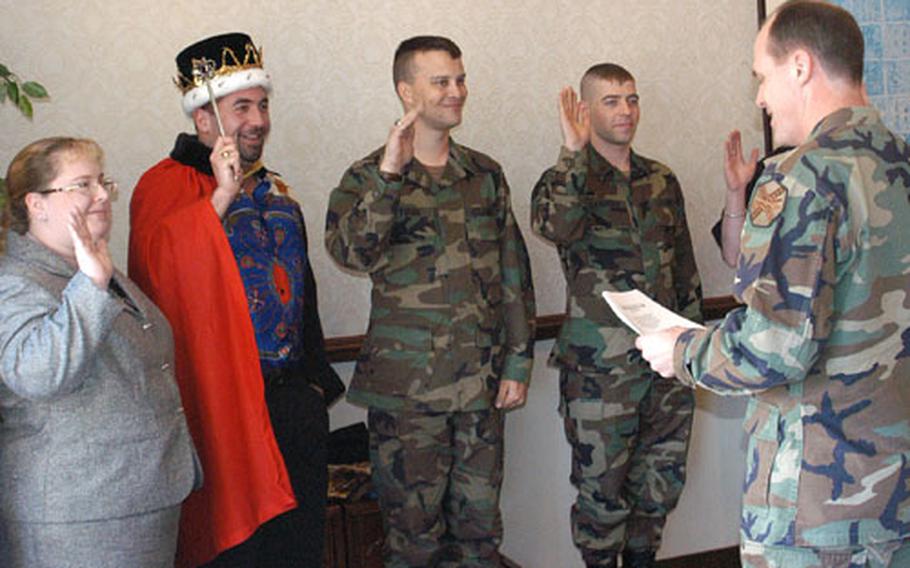 CAMP ZAMA, Japan &#8212; John Gallagher wore a crown and promised to uphold the virtues of his office. With him Wednesday stood the newest community mayors serving at Army posts in Japan.

For about a decade, mayors have been an intermediary between the community and leadership at Army installations.

They field complaints and direct residents to authorities who can help them and bring issues to the command staff. They help cut through red tape and lessen the awkwardness a resident might feel approaching a commander. They serve as filters, managing smaller issues on a lower level so the command can focus on bigger ones. They also review policies and help guide new programs that serve the community.

&#8220;They provide a link of communication between the command and the community,&#8221; said Patricia A. Centeno, community life specialist at Army Community Service and Camp Zama&#8217;s mayor program coordinator.

They have examined speeding in residential areas, pet control, park cleanliness and parking. Their suggestions have led to more parking spaces, a speed-limit study and have influenced new housing construction.

&#8220;One of my ideas was incorporated into the building design of the new BOQ (Bachelor Officer Quarters),&#8221; said Gallagher, the mayor for single civilians.

Single personnel don&#8217;t have thermostats or ceiling fans to help control room temperature. He complained, and the new buildings were designed with ceiling fans.

Sagami Depot mayor Rhonda Clopton thought the nativity scene on base looked shabby last year. As mayor, she plans to create a program to allow Depot families to adopt, fix up and store each piece. She also hopes to install building letters on the rear side of buildings so they are visible from more directions.

&#8220;It just occurred to me the other day,&#8221; she said. She was struggling to find a building that faced away from the parking lot.

Being mayor is not just about addressing complaints, Gallagher said.

The group is elected democratically. First, they&#8217;re nominated in November, by themselves or by others.

If others nominate them they have to agree to do the job. Elections take place in December, and the new mayors are sworn in in January.

In the Kanto Plain, the Army has 16 mayoral positions &#8212; a mayor and deputy for: Camp Zama, Sagamihara Housing Area, Segami Depot, single soldiers, single civilians, Japanese employees, off post and teens. They serve one year and are not paid.

Christopher McKibbin, a 10th-grader, will represent teens. His father, Chris McKibbin, said the program ensures teens have not only a voice, but also one with some degree of power.

Cadet said since the mayors are volunteers there haven&#8217;t been many incentives for them. But this year, the outgoing mayors received awards and achievement certificates.

The command has also become more responsive, to help make their jobs easier, he added.

How to reach them

Here are the 2004 mayors and deputy mayors and how to contact them. The phone numbers are work numbers unless otherwise noted.