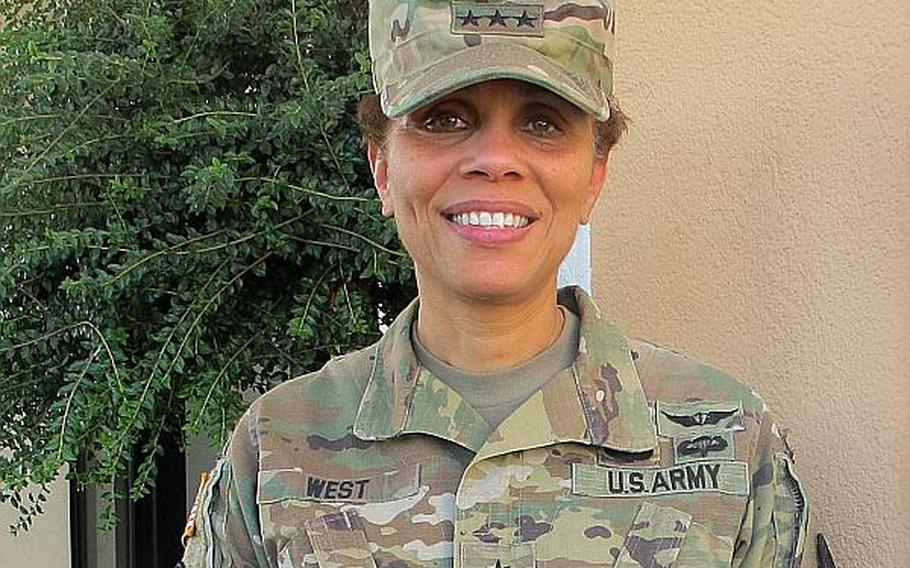 Lt. Gen. Nadja West, Army surgeon general and the commander of the Army Medical Command, visited Vicenza, Italy, July 18, 2017, during a check of the command's capabilities, facilities and personnel in Europe. West, the first African-American surgeon general in Army history and the second woman to hold the position, told medical officers at a town hall meeting that to succeed they needed empathy as well as professional competence. (Nancy Montgomery/Stars and Stripes)

VICENZA, Italy — She’s the first African-American surgeon general in Army history, the first black female Army officer to earn three stars and the highest-ranking woman ever to graduate from the U.S. Military Academy.

For Lt. Gen. Nadja West, it’s almost too embarrassing to talk about.

“The first this and that — it just sounds so self-serving,” she said.

After being appointed last year, the service’s second female surgeon general and commander of the Army Medical Command declined an interview to talk about herself. She preferred, an aide explained, “talking about readiness, military medicine and health and medical issues concerning our soldiers and beneficiaries.”

This week at a town hall meeting, West discussed all of the above.

Navy medical workers asked her advice on addressing a nursing shortage, how to best deliver behavioral health care and about an expected change next year that transfers responsibility for Army-managed hospitals and clinics to the Defense Health Agency.

However, many of the questions were about her career. West spoke candidly about her path to the pinnacle of Army medicine.

Which assignments enabled her rise through the ranks? one asked. How did she choose mentors?

“If you’d asked me [those questions] as a plebe at West Point I would have laughed,” West replied.

In the third academy class to admit women, she was an average cadet, she said. She almost didn’t go to medical school because she lacked confidence and doubted she’d be accepted.

She was encouraged by a doctor she met while visiting her father in the hospital. “What do you have to lose?” he said. “The worst that can happen is that they say no.”

A board-certified family practitioner and dermatologist, West is youngest of a dozen children adopted by a couple who, both reared in the Jim Crow South, surmounted racism to achieve their goals.

Her father, who instructed his children to always maintain a “sense of decorum,” enlisted into a segregated Army, served for decades and retired as a chief warrant officer 4.

Her mother was a civil rights activist who corresponded with Eleanor Roosevelt, West said. While stationed with West’s father in postwar Germany, in tandem with a Catholic orphanage, she spearheaded hundreds of adoptions of biracial children by African-American couples.

Those were her first mentors, West said, along with older siblings, most of whom also joined the military.

Trying to advance one’s career by assignment choice might be counterproductive, she said. If officers treat a position as a mere stepping stone to something better, she said, “People will know that.”

West leads 140,000 doctors, nurses and technicians worldwide and is responsible for 52 medical facilities. She talks frequently about the importance of empathy, saying that the best leaders try to understand and connect with those under their command and treat them with respect.

In an interview after the meeting, West recalled a pair of privates-first class she encountered years ago who wanted her autograph. As the then-colonel talked with the two young African-American women, one confided that she’d like to become an Army officer but knew it wasn’t possible.

What did she have to lose?