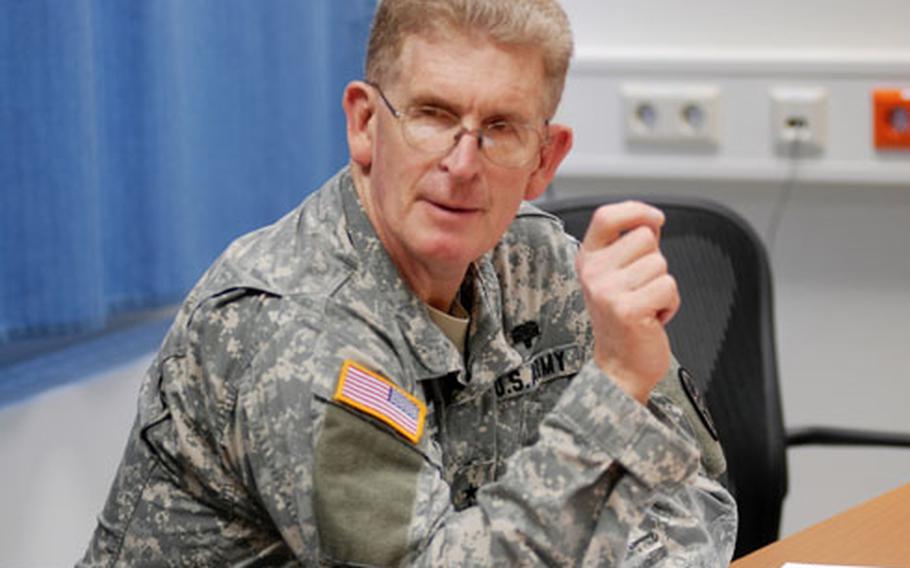 LANDSTUHL, Germany &#8212; The surgeon general of the Army wrapped up a three-day visit to Europe on Thursday with a tour of Landstuhl Regional Medical Center.

Army Lt. Gen. Eric Schoomaker, who made stops in Italy and Germany, is the younger brother of former Army chief of staff and retired Gen. Peter Schoomaker.

During his visit to Landstuhl, the surgeon general learned about a series of technological advances that will benefit doctors here.

Landstuhl and Europe Regional Medical Command are serving as a "living laboratory" for advances in medical and clinical technologies. A wireless network at the hospitals allows doctors to check patient records from their laptop computers, and voice-recognition software enables doctors to have their post-operative notes typed into patient records by merely talking into a microphone.

"We now have tools which clinicians can use that make this electronic health record &#8230; far more, not only effective and accurate, but it&#8217;s far more user-friendly," he said. "&#8230; We&#8217;re hearing [of] surgeons that love it. When a surgeon tells you they love anything like this, you know you&#8217;ve broken into a new cosmos."

In order to fight disease and injury successfully, "you&#8217;ve got to have universal access to information precisely tailored to the patient and tailored to the clinician who intervenes," Schoomaker said. "That&#8217;s what this electronic health record is doing, and what Landstuhl and the European region is doing for us is giving us the tools to make us optimally effective in that environment."

Schoomaker said he&#8217;d like to bring people to Landstuhl to see how the hospital is implementing the technology.