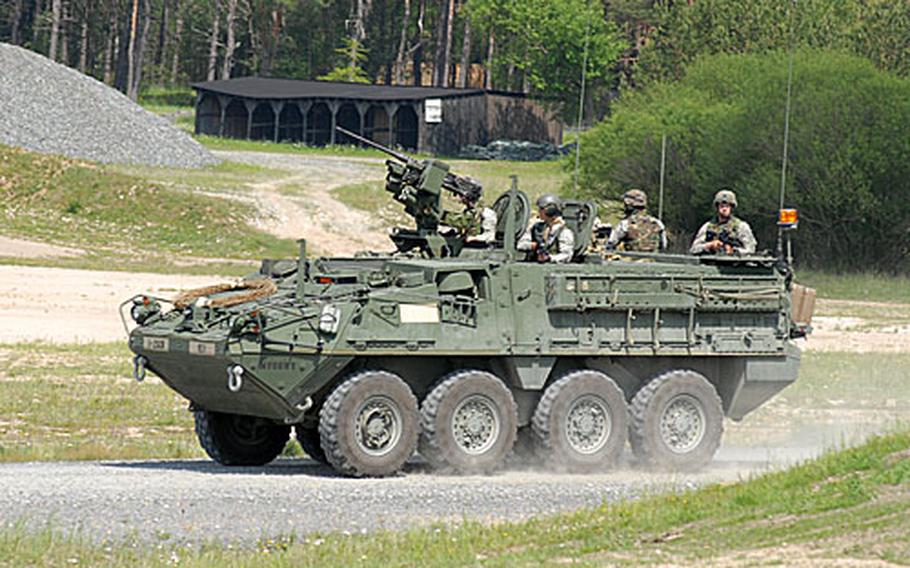 A 2nd Cavalry (Stryker) Regiment Stryker armored personnel carrier moves onto a range at Grafenwöhr Training area during a demonstration for delegates from the 56-member Organization for Security and Cooperation in Europe. (Seth Robson / S&S)

A 2nd Cavalry (Stryker) Regiment Stryker armored personnel carrier moves onto a range at Grafenwöhr Training area during a demonstration for delegates from the 56-member Organization for Security and Cooperation in Europe. (Seth Robson / S&S) 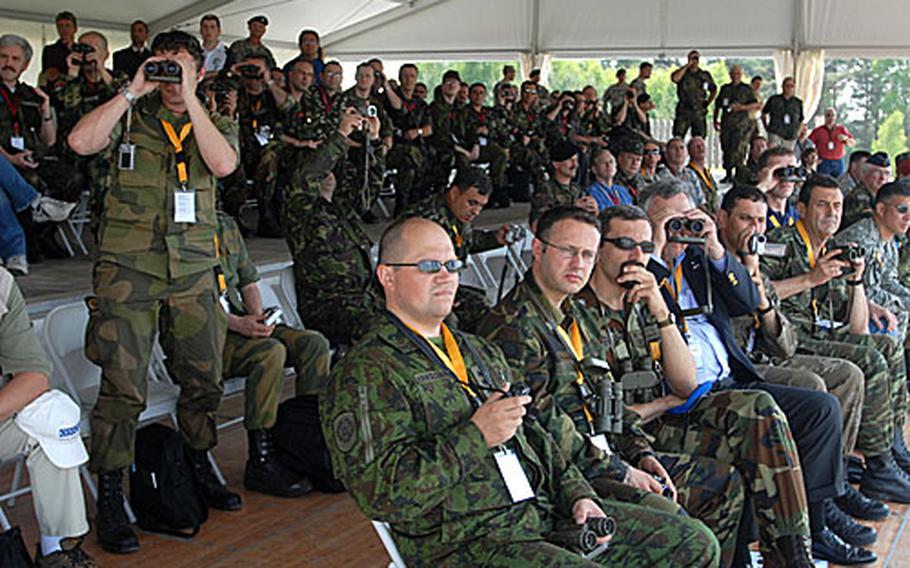 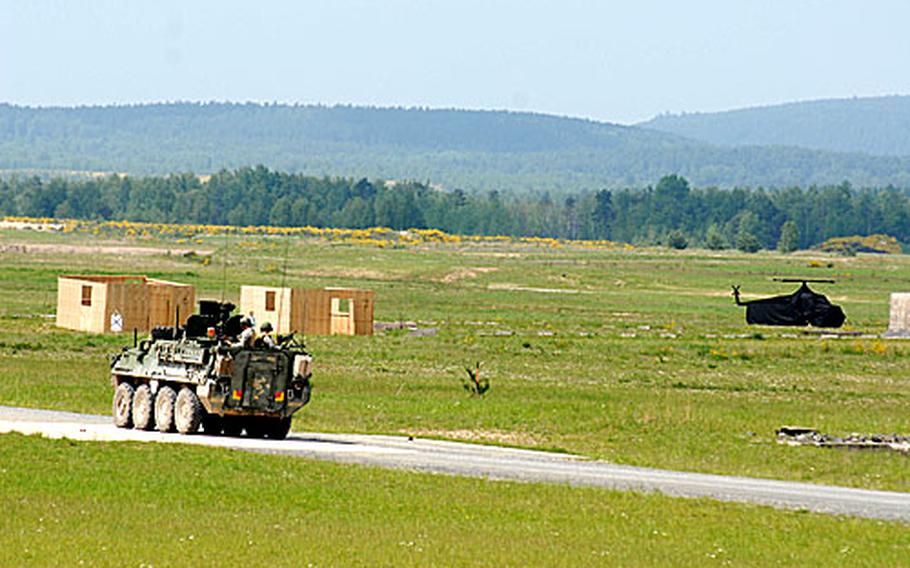 A Stryker armored personnel carrier moves into position to help rescue the crew of a "downed helicopter." (Seth Robson / S&S)

GRAFENW&#214;HR, Germany &#8212; The U.S. Army got a chance to show off its Stryker armored personnel carrier this week to delegates from the 56-member Organization for Security and Cooperation in Europe.

A 1999 agreement called the the Vienna Document requires members of the organization, which includes the U.S., to demonstrate major weapons within a year of their deployment in Europe, U.S. Army Europe public affairs officer Bruce Anderson said.

The 2nd Cavalry (Stryker) Regiment brought 300 of the eight-wheel vehicles to Vilseck last summer. The unit will deploy to Iraq in August.

On Wednesday, 51 delegates from 32 countries were at Grafenw&#246;hr Training Area to watch a platoon of 2nd Cav Strykers perform a simulated mission to rescue the crew of a downed helicopter.

Maj. Greg Burbelo, 1st Squadron, 2nd Cav executive officer, told delegates that the platoon would act as a quick reaction force during the mission, which involved securing the site of the crash, recovering wounded crewmembers and sensitive items, and destroying insurgent forces in the area.

&#8220;One of the key capabilities of the Stryker is its stealth,&#8221; Burbelo told the delegates as several Strykers zoomed past their viewing stand in a cloud of dust.

Soon the Strykers&#8217; machine guns engaged pop-up vehicle and troop targets behind the downed helicopter &#8212; represented by a black, helicopter-shaped object on the range.

Another key capability of the Stryker is its communications package that allows vehicle commanders to talk to each other and gain situational awareness of the battlefield, he said.

After the enemy targets were suppressed, two infantry squads dismounted from the Strykers and cleared a collection of plywood buildings. The delegates couldn&#8217;t see what went on inside but heard sporadic shooting as the soldiers moved through the &#8220;village&#8221; towards the helicopter.

As the infantry worked, one of the Stryker vehicles moved within 50 meters of the buildings to provide flank security, Burbelo said.

Eventually one of the squads reached the helicopter and secured the crash site while another took care of the injured crew.

Gunners on the Strykers laid down suppressing fire to keep enemy forces away.

&#8220;They have just deprived the enemy of any ability to reinforce this operation,&#8221; Burbelo said.

&#8220;Traditionally we have gone down the tracked route, but this is something we have also looked at as an alternative to tracks. The system seems to be well integrated. But without seeing it in a natural (combat) environment it is difficult to tell,&#8221; said White, whose background is in light infantry.

Another delegate, Capt. Philippos Larkos, of the Cyprus National Guard, said the Stryker appeared to be a good vehicle with many capabilities and a lot of firepower.

&#8220;It travels quickly with safety and takes the squad every place it must go. We expect to have something similar to that in the near future,&#8221; he said.