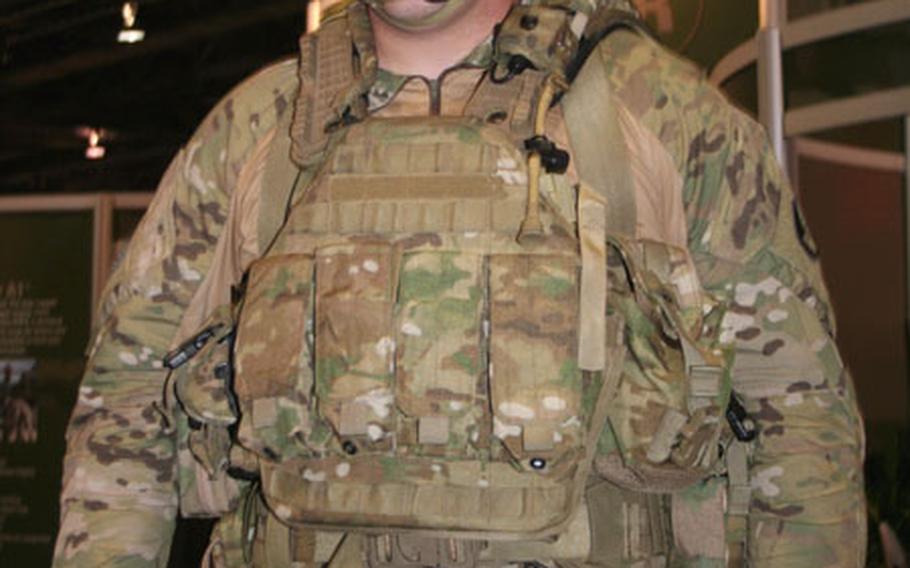 Sgt. Josh Deveraux, 24, of the Natick Soldier Center, shows the Army&#39;s new Future Force Warrior system, which features a new type of body armor that is slated to be fielded in fiscal 2010 or 2012. (Jeff Schogol / S&S)

ARLINGTON, Va. &#8212; Soldiers waiting for new body armor will have to keep waiting.

The Army plans to issue the next generation of body armor as part of the Future Force Warrior system in fiscal 2010 or 2012. That timetable has not changed, said Maj. Gen. Jeffrey A. Sorenson, who handles Army acquisition, technology and logistics issues.

The Marine Corps has no firm timeline to begin issuing the next generation of body armor, but it hopes to do so over the next two to three years, said Capt. Jeff Landis, a spokesman for Marine Corps Systems Command. The driving factor will be when the industry can develop material that is lighter and more flexible than what Marines wear now.

In October, an official with the U.S. Army Natick Soldier Center in Massachusetts said the Army may try to get the new body armor to soldiers earlier than 2010, by issuing it along with the new Land Warrior System, a series of sensors that soldiers can wear. But on Wednesday, Sorenson told reporters the Army has decided to limit the Land Warrior program to just one brigade for now.

The Army&#8217;s new body armor will have six ceramic ballistic plates, as opposed to the four plates used in current body armor. The plates would be 12 percent larger than current Small Arms Protective Inserts and would be shaped to provide more protection along the spine and for the front, back and sides.

The new body armor is slated to undergo formal tests in fiscal 2008. Before the body armor can be fielded, researchers must prove that the shaped ballistic plates provide just as much protection as current SAPI plates.