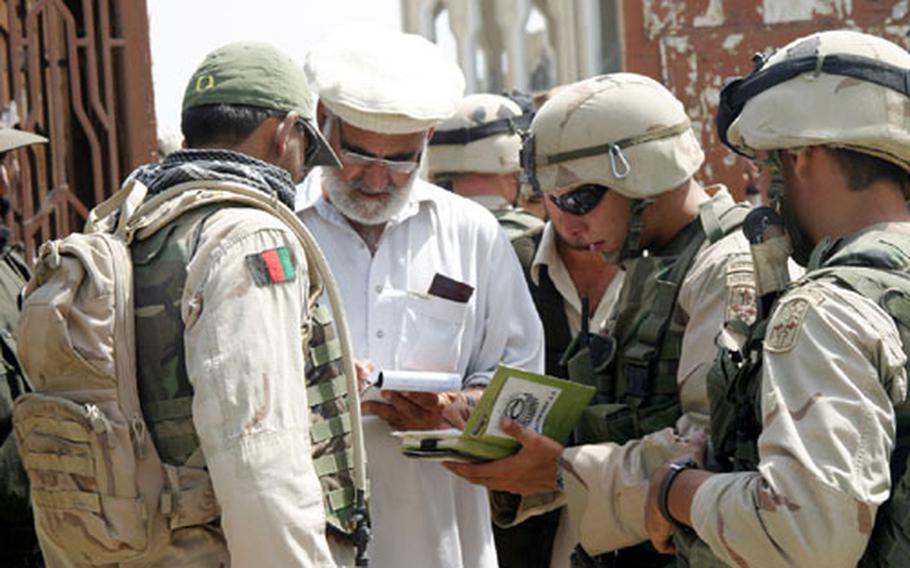 During a visit to a voter registration site in downtown Khowst, 2nd Lt. John Campbell (center) talks with Mujahedin about how the site was going. U.S. forces in Afghanistan last week launched Operation Lightning Resolve, a new campaign to protect the upcoming elections. (Courtesy of U.S. Army)

During a visit to a voter registration site in downtown Khowst, 2nd Lt. John Campbell (center) talks with Mujahedin about how the site was going. U.S. forces in Afghanistan last week launched Operation Lightning Resolve, a new campaign to protect the upcoming elections. (Courtesy of U.S. Army) 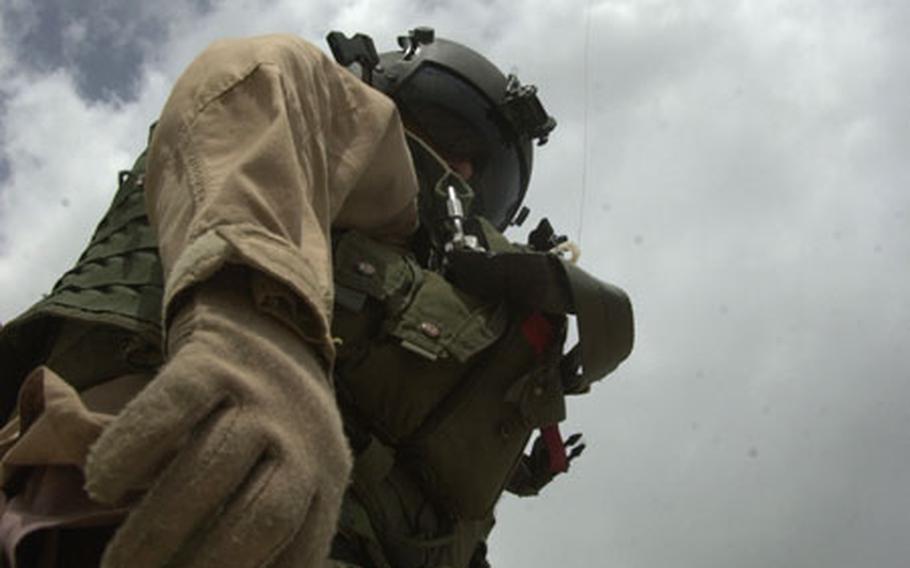 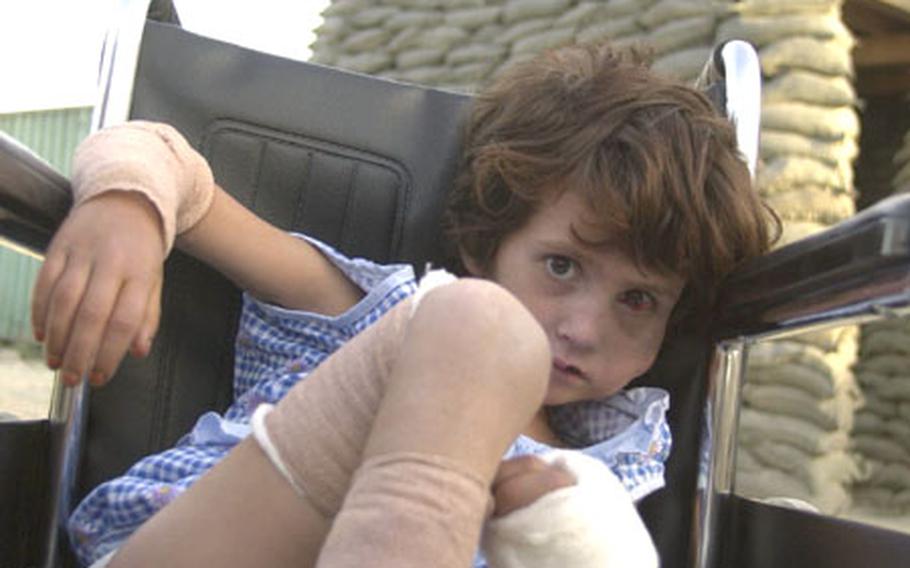 An 8-year-old girl is still recovering at the Army hospital at Bagram after a June 26 roadside attack designed to thwart upcoming elections in Afghanistan. U.S. forces are stepping up efforts to support the polls, while girding for more violence. (Jon R. Anderson / S&S)

BAGHDAD &#8212; This election year, the U.S. military is taking extra steps to give deployed servicemembers the means to cast a vote that counts.

In 2000, many absentee ballots from servicemembers deployed or stationed overseas did not arrive in time to be counted. Now, in post-Sept. 11, 2001, America, with servicemembers fighting terrorism on two fronts, a revamped voting process should ensure that the voices of deployed troops are heard clearly from the Middle East and Southwest Asia.

The Army is taking lessons learned from the 2000 election, and affording soldiers the opportunity to register and get their absentee ballots in earlier, according to 2nd Lt. Kyle Missbach, 1st Cavalry Division voting assistance officer.

&#8220;[Absentee voting] for the last presidential election was a debacle,&#8221; Missbach said. &#8220;I want to ensure that soldiers are given the opportunity to register and vote and have their say.&#8221;

The 1st Cavalry Division has distributed Standard Form 76 to all its units in Iraq. From there, unit leaders got the federal voting postcard into the hands of individual soldiers last month, according to Missbach.

The postcard is used both to register to vote and request an absentee ballot from the state a servicemember plans to vote in, he said.

The form also can be printed from the Federal Voting Assistance Program Web site: www.fvap.gov.

Missbach recommends that soldiers complete and mail the form by Aug. 15.

Even those who are already registered to vote should send in the card, because it&#8217;s the simplest and surest way to get an absentee ballot, he said. Within three to five weeks after mailing the card, soldiers should receive absentee ballots, which in turn should be filled out and mailed by Oct. 11.

Soldiers can vote in their home state of record or in a state where they have an established residency. Each state has different procedures for how the absentee votes are tallied, Missbach said.

Another step the Army is taking to ensure soldiers are getting the chance to vote comes in the form of a massive census of all soldiers. Army leaders will physically meet with every soldier to verify their name and Social Security number and that they have been given a chance to register and vote, Missbach said. That survey runs Tuesday through Aug. 15.

Yet another check for the 1st Cav included an inspector general&#8217;s inspection of the division&#8217;s Voting Assistance Program before it left Fort Hood, Texas, for Iraq, Missbach said.

In Afghanistan, officials staked out dining areas, setting up voting registration booths at entrances where troops line up to eat.

&#8220;Most said they had already taken care of registering,&#8221; said Maj. Bryan Jacobson, the voting registration officer for North Dakota National Guard&#8217;s 109th Engineer Group, who helped with the effort a few weeks ago.

All the effort seems to be paying off.

In Aghanistan, hundreds registered with voting assistance officers. Capt. Lindy White was one of them.

&#8220;I just got my absentee ballot for the primaries last week,&#8221; said White, a staff officer for the Hawaii-based 25th Infantry Division.

Sgt. Robert Whitney, an Indiana reservist with the 221st Ordnance Company stationed at an outpost along Afghanistan&#8217;s border with Pakistan, said he intends to register, but hasn&#8217;t yet.

Some soldiers completed the federal voting postcard before they deployed.

Staff Sgt. Clifford Banta, also from the 81st, is on his first deployment, but will cast his vote as he does every year.

Other servicemembers, such as Air Force Capt. Tom Bucci, a Central Criminal Court of Iraq lawyer, are seasoned veterans when it comes to casting absentee votes.

With all of these tools in place to give soldiers an opportunity to vote &#8212; even the most remote forward operating base in Iraq has a voting assistance officer &#8212; all troops should get the chance, Missbach said.

&#8212; Jon R. Anderson in Afghanistan contributed to this report.

BAGRAM AIR BASE, Afghanistan &#8212; The first time Capt. Randall Newman voted was in a fighting position during basic training in 1988.

&#8220;I guess I see it as an obligation,&#8221; said Newman, who was already registered before deploying here, but registered again &#8220;just to make sure,&#8221; when his voting officer handed him a registration card.

When asked why he feels so strongly about voting, he struggled for an answer.

As a kid, he said, his parents always made sure they took him along to the local elementary school when they cast their ballots. &#8220;They felt very strongly about voting,&#8221; he said, a sense of civic duty they passed on him.

In a country struggling to register voters for its first elections since the Taliban was ousted almost three years ago, Newman nodded solemnly and said: &#8220;I vote because I can.&#8221;