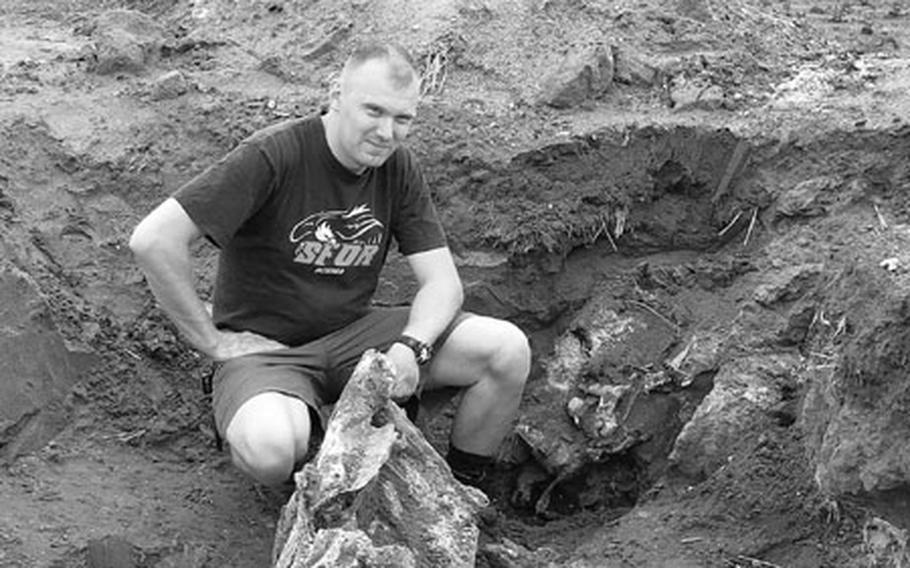 Staff Sgt. Danny Keay, center in baseball cap, works at the site of a crashed World War II U.S. Thunderbolt in a field west of Griesheim. With him in foreground, center-right is Uwe Benkel, from Kaiserslautern, Germany, who has spent much of his free time over the past 15 years looking for remains of aircraft. (Courtesy of Danny Keay)

DARMSTADT, Germany &#8212; One evening in mid-July, as dusk bowed to night, the sudden appearance of an elderly man startled Danny Keay as he labored alone near a pit containing the remains of a World War II fighter.

Maintaining a comfortable distance, the man silently stood over his bike and watched Keay work. Eventually, he rolled forward to ask about the site, situated in a field west of Darmstadt near the town of Griesheim.

When Keay, an Army staff sergeant, said it was a Thunderbolt, the man felt vindicated. As a young teen, the man explained, he saw the crash, but had a difference of opinion with some friends over which side took the hit.

They continued to talk, and Keay gained more insight into what happened to U.S. Army Maj. Chester Slingerland on the morning of March 23, 1945.

For Keay and others who hunt for World War II crash sites, local residents are an invaluable source of information. In many cases, though the passage of time is working against them, elderly residents will step forward with accounts and insights that give texture to an often-hazy account.

Indeed, such work involves much more than a pick and shovel. There are letters to write, items to research and public records to review.

The 39-year-old naturalized American is a training instructor for Company B, 2nd Military Intelligence Battalion in Darmstadt. Keay prefers not to dwell on his digs while on duty, but some colleagues have shown an interest in the subject, which pleases Keay&#8217;s commanding officer.

Reared in Germany, Keay spent part of his formative years in England, a country with a fancy for flight that is second to none.

Back in the 1970s, when he was a kid, aircraft enthusiasts scoured the British countryside looking for planes lost in the war. Keay, the son of a British airman and a German mother, said that explains why so few aircraft downed over the country remain missing.

Keay said as a kid he enjoyed assembling model airplanes. He also developed an interest in hand-held metal detectors. Those two hobbies came together in the late &#8217;70s when he participated in his first dig, the recovery in Germany of a RAF Wellington bomber flown by a Canadian crew. Since then, he has led or participated in more than 30 digs.

Though relatively new to the Darmstadt area, Keay&#8217;s ability to speak German has given him greater access to local officials and organizations.

There are more than 3,000 U.S. airmen missing in action in Germany from World War II, Benkel said. The number of Germans could run as high as 2,000. In all, about 6,500 warplanes went down in an east-west corridor stretching from Frankfurt in the north to Stuttgart in the south, he said.

Many of the sites are known. Many more remain a secret.

Both Benkel and Keay said the abundance of wrecks coupled with the prospect of finding war trophies has drawn unscrupulous players into the field. Benkel estimated there are 10 to 15 reputable teams in Germany. Many of the rest are shady &#8212; at best.

Technically, the debris is the property of the U.S. government, but its primary interest is in recovering the crew members&#8217; remains and personal belongings. Keay said he notifies U.S. and German authorities whenever his group locates a new site. Sometimes towns and museums want the wreckage. Often they don&#8217;t.

According to Keay, Slingerland was providing close-air support for the 3rd Army under Gen. George S. Patton when his P-47 was shot down on the outskirts of Griesheim.

Townspeople who witnessed the crash told Keay the plane dove nose-first into the ground. Apparently, Slingerland was ascending after a strafing run when an anti-aircraft gun positioned in a boxcar brought him down.

But those were partial remains. Keay&#8217;s team found under the engine block parts of an arm, skull and jawbone that, if they belong to Slingerland, might someday join the rest of his remains.

On this dig, Keay got lucky. He spoke with five or six witnesses to the crash. That&#8217;s often not the case, at least not any more.

The elderly man Keay met in the field said he was a member of the Hitler Youth pressed into service. As they spoke of the raid, the falling fighter and the smoldering wreckage, Keay sensed the man was drifting back in time.