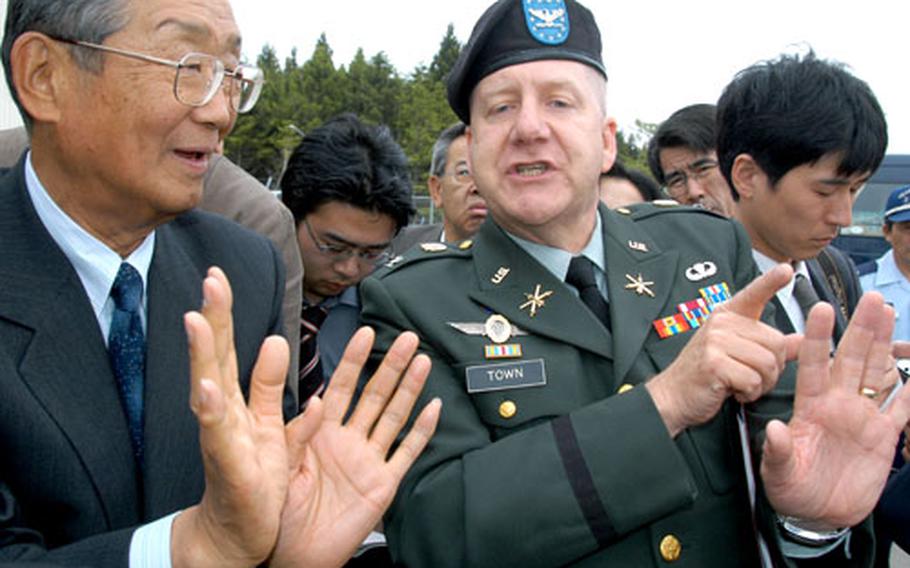 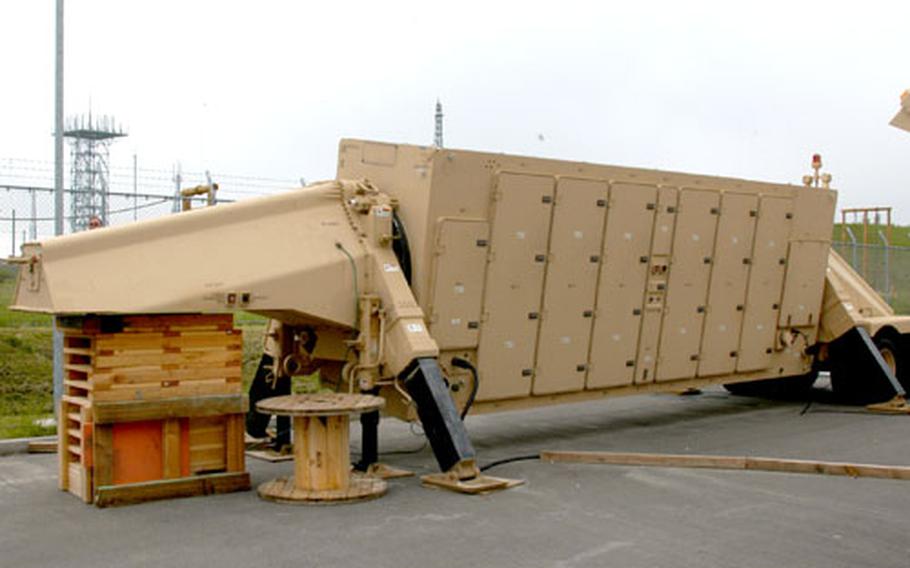 The new Forward-Based X-Band radar — the newest piece of the Japan-U.S. missile defense system — is being stored temporarily at Misawa Air Base in northern Japan. (Jennifer H. Svan / S&S)

Local media and Japanese government officials were invited to Misawa Air Base on Tuesday to see, for the first time, the Forward-Based X-Band radar, a new high-tech surveillance system designed to detect and track ballistic missiles and the first of its kind employed, according to U.S. military officials.

To Tuesday&#8217;s observers, the radar resembled four nondescript beige trailers, their contents not on display. But Town described each of the components: a 510-by-350-inch antennae, electronics for storing and processing data, a coolant system and an office unit for support personnel.

The mobile radar arrived at Misawa in pieces over the past several weeks. After system checks, it will be transported to the Air Self-Defense Force&#8217;s Shariki base in Tsugaru City, on the coast of Aomori prefecture.

U.S. and Japanese government officials agreed in 2005 to place the $2 billion radar in Japan as part of sweeping changes called for in a U.S.-Japan military realignment plan finalized this spring.

The missile defense idea gained momentum in Japan and the United States in 1998 after North Korea launched a Taepodong missile over Japan. The X-Band radar, officials said, would help detect and track a missile launched against either Japan or the United States. Town stressed that the radar has no intercept capabilities.

&#8220;This is a surveillance, detection and early warning system, to provide information to the Japan Defense Agency and to the U.S. government,&#8221; he said.

The X-Band radar will operate 24 hours a day under the supervison of about 100 professional contractors and &#8220;specially selected military people,&#8221; Town said.

Local residents have expressed safety concerns, according to media reports, but Town said Tuesday the system will not affect the environment; it&#8217;s self-contained and generator-powered. And no frequency interference surfaced in tests in California, he said.

&#8220;When the radar is turned on, you would not want to stand here&#8221; due to the impulse that comes from it, Town told journalists and government officials near the radar, but the unit will be in a protected area on Shariki and is not dangerous outside the fence line.

Juliana Gittler contributed to this story.