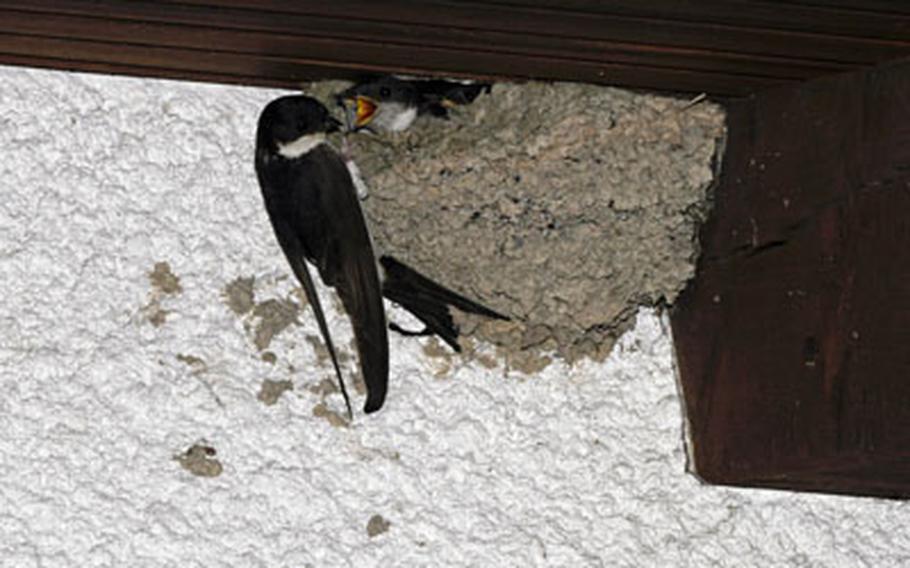 A house martin feeds its young. The colony of house martins in Baumholder, with about 240 nests on the Army base alone, is the largest in the state of Rheinland-Pfalz. (Courtesy of Christian Jungmann)

A house martin feeds its young. The colony of house martins in Baumholder, with about 240 nests on the Army base alone, is the largest in the state of Rheinland-Pfalz. (Courtesy of Christian Jungmann) 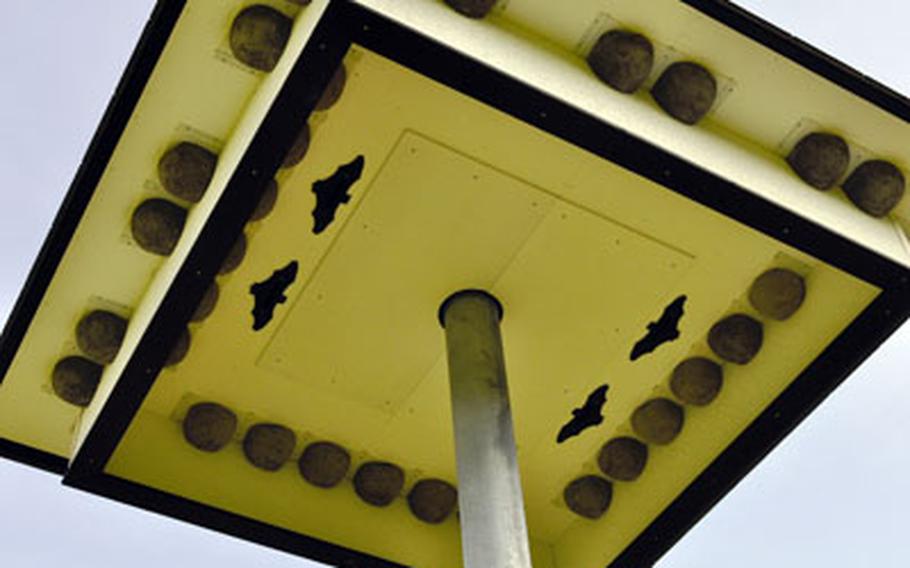 Buy Photo
The underside of one of two new birdhouses built in Baumholder for house martins has 48 brown, cup-like nests made of plastic set up for use of the small migratory birds. There are also four slots where small bats can make their homes. (Seth Robbins/Stars and Stripes)

BAUMHOLDER, Germany &#8212; For years, a large colony of house martins, small migratory birds that travel more than 6,000 miles from Africa to breed each spring, has nested in the roofs here.

The tiny, fork-tailed birds, blue and black except for their white rumps and bellies, are a common sight in the Wetzel housing area in the summers. Their droppings clump on overhangs or slide down walls.

Now that several housing units in Wetzel are slated for demolition to make way for 38 new town homes, Army officials had to find new nests for Baumholder&#8217;s more than 500 resident martins, which are protected under German law. So they have installed two large birdhouses with a total of 96 artificial nests, and more will be built if the birds find them to their liking.

The birdhouses are secured atop 30-foot poles and cost about $6,000 each. Dotting the underside of each birdhouse are 48 brown, cup-like nests made of plastic that can each house two birds and their young. The birds, which normally build their nests from mud and debris collected near water holes, don&#8217;t have to do a thing, said Timo Klipstein, core conservation manager for the U.S. Army garrison.

The bigger problem, he said, is luring them from their existing nests, nestled in the lips between the roofs and the walls of the housing units. To draw the house martins to their new residences, the structures were painted white, a color that attracts them. Klipstein will also install speakers that will play an MP3 recording of house martins twittering.

"They are a social bird," Klipstein said, "and they like to live together."

In the next few weeks between 20 million to 48 million house martins will arrive in Europe from North Africa. About 5 inches long, the fast-flying birds, members of the swallow family, feed on flying insects, darting through the air to catch them.

Christian Jungmann, a nature photographer and member of a German conservation group, said the colony of house martins in Baumholder, with about 240 nests on the Army base alone, is the largest in the state of Rheinland-Pfalz.

But the birds often have trouble finding the proper mud and clay to build their nests here as more and more of their natural habitat is converted for human use &#8212; making the artificial nests, such as the ones in Baumholder, crucial to their survival, he said.

Dominic Mutinda, chief of the environmental division in Baumholder, said he is eager for the arrival of the house martins to see if they will take to their new residences. "If we can get just a few," he said, "then it&#8217;s going to be a success."

Klipstein says it will take awhile to see if the project works.

"Ecology often takes decades," he said. "I&#8217;m not looking for all the nests to be populated in the next week. It&#8217;s probably going to take the next 10 years. But we have to support nature to make up for what we destroy."