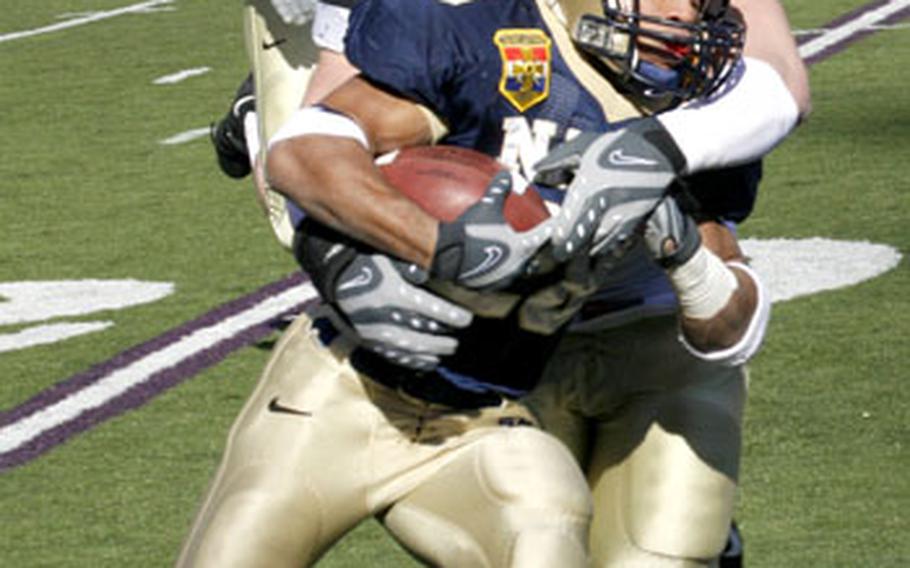 Army&#39;s Brian Chmura hauls down Navy&#39;s Zerb Singleton, holding him to a gain of only two yards in the first quarter of Saturday&#39;s game at Baltimore. (Joe Gromelski / S&S)

BALTIMORE, Md. &#8212; Linebacker Brian Chmura had been looking forward to the Army-Navy game all year.

It was the most important contest of the season.

It was the first chance in months to see his father, who took a week&#8217;s leave from his MP company in Iraq to attend the game.

And afterwards, Chmura had only two words to describe it:

For Chmura and Army&#8217;s other seniors, Saturday&#8217;s 38-3 defeat was the most painful of their college careers. They are the third straight West Point class to graduate without seeing their school defeat Navy, and after the game they regretfully spoke to reporters about what could have been.

Just down the hall, Navy slotback Reggie Campbell smiled broadly as he answered questions about his exemplary play in his final rivalry game &#8211; a record-setting 98-yard kick return touchdown, and another rushing TD &#8211; and his expectations for the upcoming bowl game.

When asked how it felt to conduct the band following the game, he broke out laughing.

While Army coach Stan Brock answered questions on how to reclaim Army&#8217;s glory &#8211; &#8220;38-3 is not much of a rivalry&#8221; &#8211; Navy coach Paul Johnson deflected questions about other possible college football suitors, saying he is focused on his team and its Poinsettia Bowl appearance later this month.

And while Campbell joked with his teammates in the hallway after the game, Chmura wiped blood off his jersey collar as he trudged back to the locker room. He said he was anxious to spend time with his father &#8211; Lt. Col. Timothy Chmura &#8211; but the celebration he hoped for would be muted.