Army seeks to spice up holidays 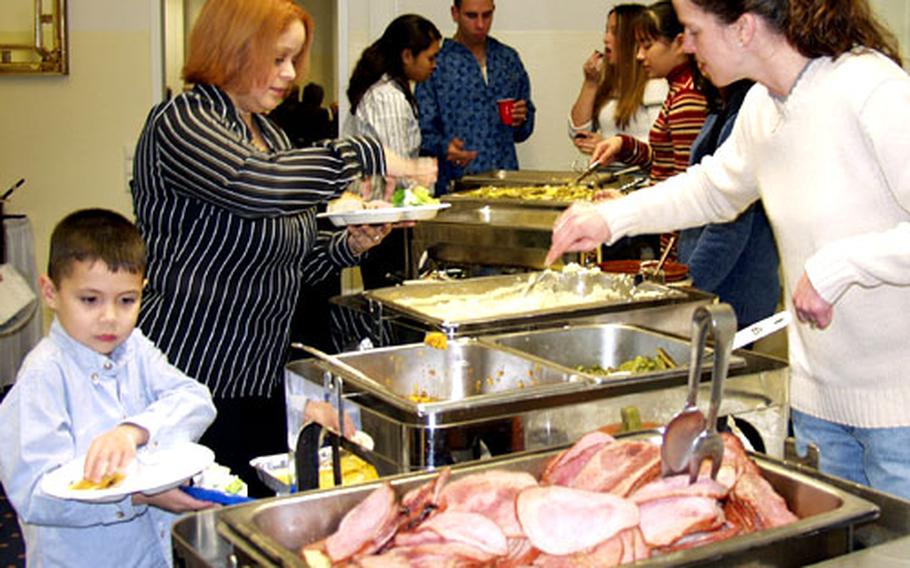 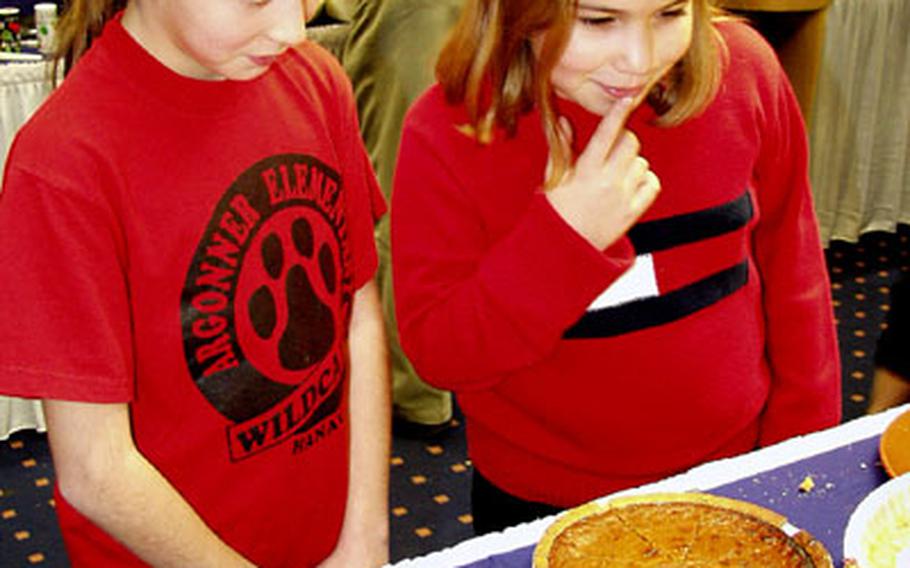 Traditionally, the 284th Base Support Battalion in Germany sponsors two Christmas tree lighting ceremonies, with Giessen and Friedberg always getting the honors.

This year, however, the support battalion has added the housing communities of Butzbach and Bad Nauheim to the list. And for good measure, each location is getting additional strands of lights, tinsel and other yuletide decorations.

&#8220;The commanders have the guidance to plus it up a bit,&#8221; Col. George A. Latham II, the 104th Area Support Group commander, said at a community breakfast meeting earlier this month. &#8220;We want to make Christmas a little more special this year.&#8221;

But Christmas isn&#8217;t the only holiday getting dressed up.

The 104th ASG, which includes the communities of Baumholder, Giessen, Hanau and Wiesbaden, has hired a production company to videotape Thanksgiving Day activities at eight of its dining halls. Film crews Thursday will take footage of feasting families at each site and then produce separate videos. The Army intends to distribute copies of the videos to 1st Armored Division units in Iraq.

With the start of the holiday season, military and community leaders across the theater are looking to do more than before, but in a measured way.

It has been a challenging year, and another awaits the command in 2004, when the 1st Infantry Division in W&#252;rzburg deploys to Iraq. Whether there is peace or war, soldiers will still leave their families for a lengthy stay in a faraway land.

For deployed soldiers, sailors and airmen, just getting through the holidays is often rewarding enough. Reminders are fine, but they tend to yank troops back to a place they can&#8217;t be, so many adopt a posture of casual indifference.

&#8220;The days really don&#8217;t mean anything over here,&#8221; Air Force Senior Airman Eric Wilcox, a security forces officer, said last Thanksgiving while pulling guard duty in Afghanistan. &#8220;One day is the same as the next. You just want to do your time and go home.&#8221;

Soldiers assigned to the 1st ID will be home this Christmas, but gone the next. That is causing many to reflect long and hard about the meaning of Christmas, family and life itself, said Dexter Cochnauer, director of community activities for the 98th ASG.

But, he added, many of the regular events, such as Christmas tree lighting ceremonies, might actually draw more people than normal because of the uncertain future. Parents, Cochnauer suspects, will be especially attentive toward their children &#8212; and each other.

Some military communities are spending more time and money this holiday season to help take the edge off things.

The 104th ASG, which supports several 1st AD communities, has an additional $16,500 in its Christmas stocking, according to Latham. Aside from more decorations and better programs, the money is also going toward Thursday&#8217;s feast.

In Wiesbaden, for example, the annual Thanksgiving Day dinner has been expanded to include more attractions. There&#8217;ll be carriage rides and a magician for those attending the feast at the Wiesbaden Army Airfield, and pony rides and a disc jockey at the gathering planned for nearby Dexheim.

Some German towns are getting involved, too.

Earlier this year, about 30 American soldiers volunteered to fill and stack sandbags to save a historical section of B&#252;dingen from floodwaters.

Now the city, situated near Hanau, has included the American community in some of its local holiday events, as much to show concern as gratitude, said Wolfgang Niebling, spokesman for the 414th BSB. City officials will also be on hand for the Army&#8217;s annual Christmas tree lighting at Armstrong Barracks.

Mary Preston works for the Army&#8217;s area support team in B&#252;dingen, where upward of 800 military families live. She notes the local German community has always supported the families of deployed soldiers. It happened during the 1991 Persian Gulf War, Preston said, and when the troops went to Bosnia and Herzegovina. Iraq is no different.

Ready for your close-up?

&#182; The production crew hired by the 104th Area Support Group will be filming at eight dining halls in Germany on Thanksgiving Day: B&#252;dingen, Hanau, Friedberg, Giessen, Wiesbaden Army Airfield, Dexheim and two Baumholder facilities, Smith Housing and Strassburg Casern. A similar effort downrange should provide some families in the near future a chance to see their favorite soldier enjoying his or her turkey feast.

&#182; Here&#8217;s a second take on the turkey filming: Army officials say if their Thanksgiving Day effort proves successful, they may opt for an encore performance to highlight Christmas activities.

&#182; While many 1st Infantry Division communities are taking a low-key approach to Christmas, that could change next year, said Dexter Cochnauer, director of community activities for the 98th Area Support Group, based in Kitzingen. If the troops do spend the next holiday season in Iraq, Cochnauer said, community organizers might follow the 1st Armored Division&#8217;s lead and sponsor more Christmas activities for the families left behind.