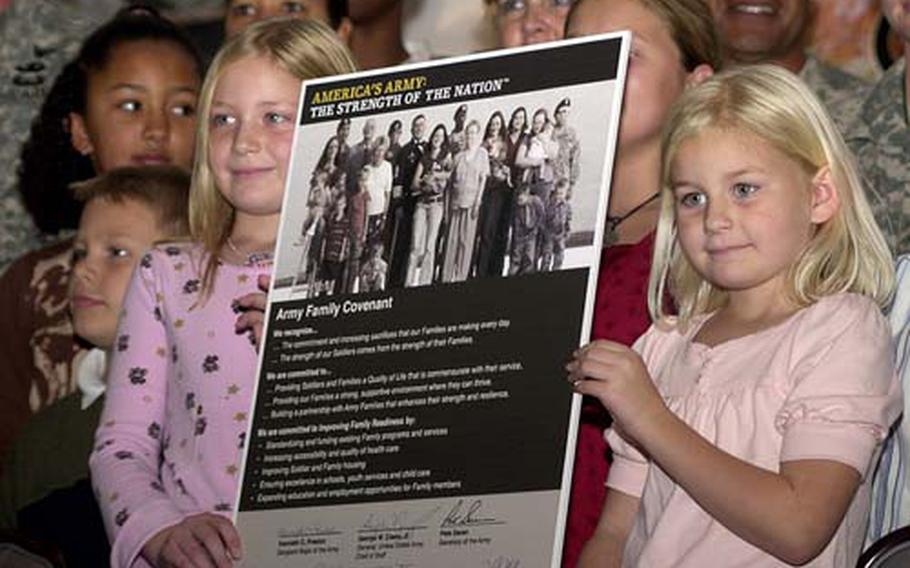 Alyssa DeMarco, left, 8, and her sister Cayla, 6, hold up the Army Family Covenant following its signing in Heidelberg, Germany, in October, 2007. (Joseph McAtee/Courtesy of the U.S. Army)

U.S. Army Europe is asking soldiers, civilians and their families for their two cents&#8217; worth about quality-of-life programs such as housing, recreation and child care services.

The input is meant to gauge how well the Army Family Covenant is working in Europe, and to help leaders decide whether any changes or improvements are needed, said Lt. Col. Chris Farrell, special assistant to USAREUR commander Gen. Carter Ham and Ham&#8217;s initiatives group.

The covenant is a promise made by Army leaders to improve quality of life in the service by increasing accessibility and quality of health care; improving soldier and family housing; ensuring excellence in schools, youth services and child care; and expanding education and employment opportunities for family members. It also includes Morale, Welfare and Recreation and other programs.

"The Army Family Covenant is a commitment to our families," Farrell said.

The Army has organized focus groups and is developing an online survey for covenant beneficiaries to give their input. It&#8217;s also asking various services such as MWR for feedback on how the program is working.

In fiscal 2008, more than $13.8 million in Army Family Covenant funding was funneled into MWR programs in Europe, according to Installation Management Command-Europe. That&#8217;s the bulk of covenant funding here, IMCOM-E spokesman Ken White said Friday. The money was spent on getting all of the Army Community Service program offices in Europe fully staffed; on ACS respite care, child and youth services; and on recreation and business programs.

The USAREUR assessment got under way this week with focus groups for servicemembers, civilian Army employees and dependents at Wiesbaden, Germany. It will continue with an online survey from mid-August to mid-February. Focus groups also have been organized for the communities of Grafenw&#246;hr, Ansbach, Stuttgart, Bamberg and Schweinfurt, all in Germany, and in Vicenza, Italy.

"General Ham had the question of how are we doing with the Army Family Covenant in Europe," White said. "We are basically looking to find out if we are meeting expectations from the customers &#8212; the customers being soldiers."

An assessment would also help USAREUR determine what changes to programs and services are needed, especially while troops are at war in Afghanistan and Iraq, Farrell said.

"As the war drags on, the needs of families are changing," he said.

The assessment also will look at services outside the Army&#8217;s purview that affect quality of life, including Defense Department schools, the Army and Air Force Exchange Service and the commissaries, Farrell said.

"The Army has said that 2009 is the year we will make good on the promises in the Army Family Covenant," Farrell said. "As long as we identify what needs to be done this year and establish a way forward, that is OK."