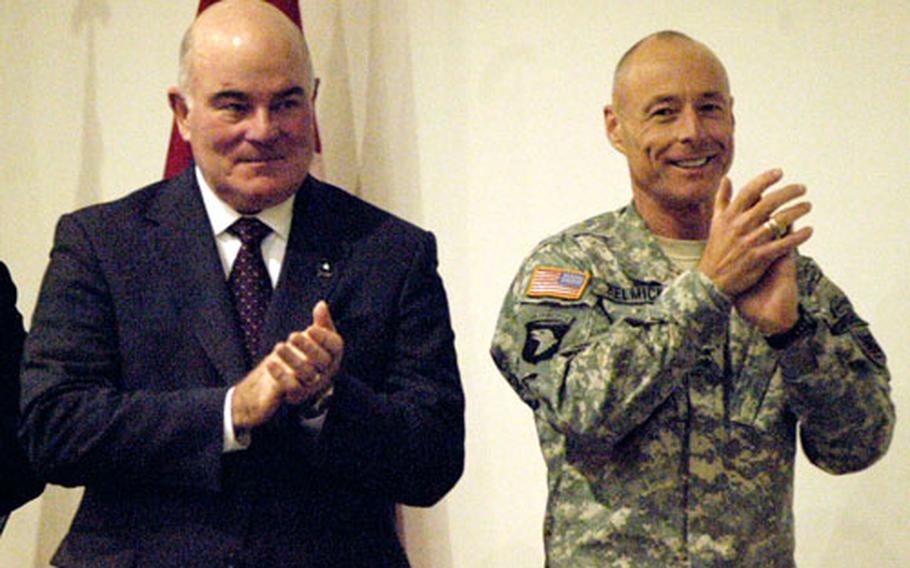 Secretary of the Army Francis Harvey, left, and Maj. Gen. Frank Helmick, commander of the Southern European Task Force (Airborne), lead the clapping as three soldiers are sworn in as citizens in the base theater Monday. Harvey addressed SETAF troops’ concerns and discounted suggestions that the Army is being stretched too thin. (Kent Harris / S&S)

VICENZA, Italy &#8212; Yearlong deployments to Iraq may be an issue for soldiers&#8217; families but shortening the tours could actually result in more casualties, Secretary of the Army Francis J. Harvey said Monday night.

Harvey, visiting the facilities of the Southern European Task Force (Airborne), told soldiers many of the casualties are in the first six weeks of a unit&#8217;s rotation. So having more frequent and shorter rotations would probably result in more loss of life, he said.

He said the Army&#8217;s goal is to have soldiers stay in their home bases for two years after a deployment, but admitted that the current time between rotations for many units is just over a year.

That will be true for the &#8220;Sky Soldiers,&#8221; which spent a year back in Italy between rotations in Iraq and Afghanistan.

Harvey said he does not believe the Army is being stretched too thin by the wars in Iraq and Afghanistan.

He said he relies on re-enlistment figures &#8212; which he said are the best in five years (and best among units that have served downrange) &#8212; and regular reports from senior noncommissioned officers about the condition of their units.

Asked about the potential of adding more soldiers to the Army, Harvey said that Congress had authorized an increase from 482,000 to 512,000.

But he said the Army was focused on converting more troops from support roles into combat arms. Such a move could bring the operational strength from 315,000 combat troops in 2002 to 355,000 in 2008.

Retired Gen. Barry McCaffrey painted a different picture last week during remarks at an officers association meeting in Washington, essentially saying the Army couldn&#8217;t continue to deploy so many troops without growing.

He also disputed McCaffrey&#8217;s assertion that the Army was lowering its standards for new recruits, citing an array of new recruits who had attained various levels of education.