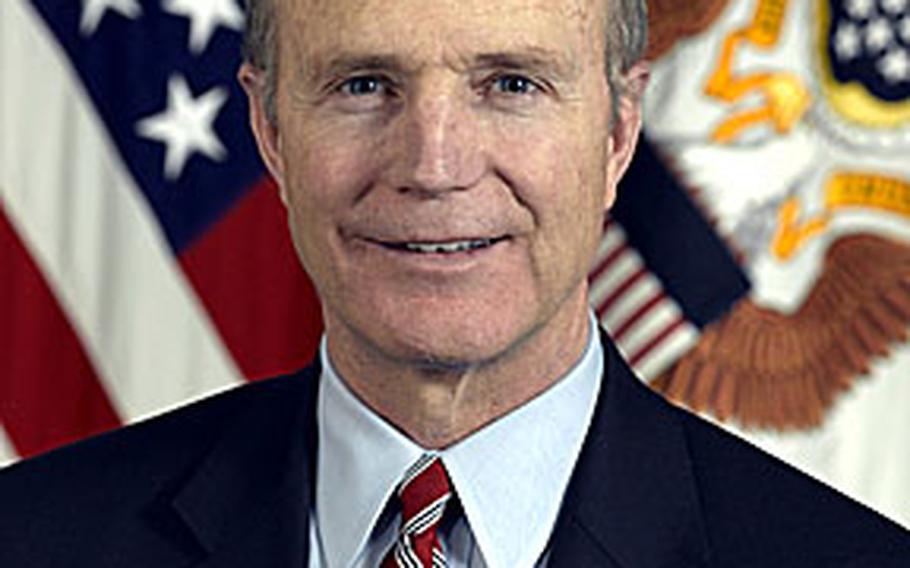 Pete Geren has been Undersecretary of the Army since February 2006. He will be acting Army Secretary. (Photo courtesy of U.S. Army)

Pete Geren has been Undersecretary of the Army since February 2006. He will be acting Army Secretary. (Photo courtesy of U.S. Army) 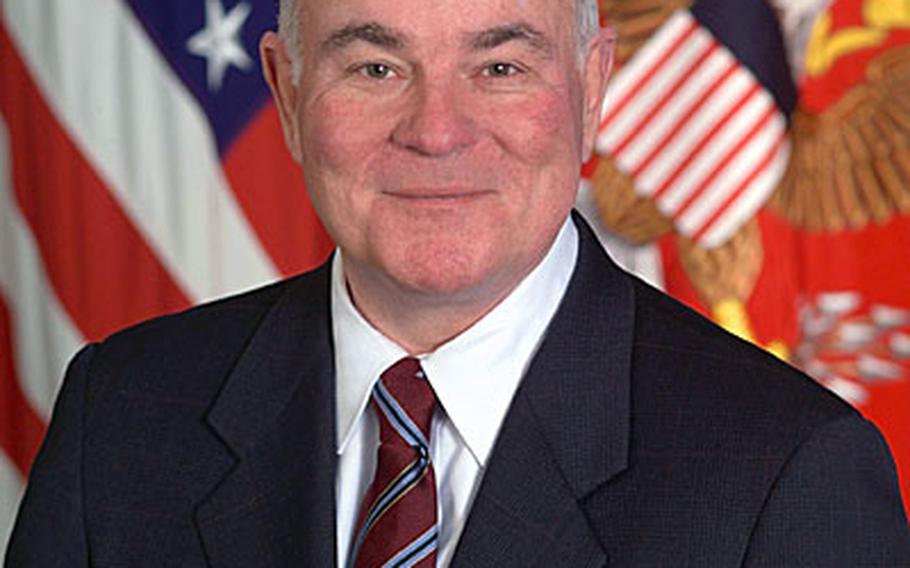 Army Secretary Francis J. Harvey has resigned amid the fallout from the Walter Reed scandal. (Photo courtesy of U.S. Army)

In a surprise announcement, Gates said that Harvey had offered his resignation earlier in the day. Undersecretary of the Army Pete Geren will take over Harvey&#8217;s responsibilities until a new secretary can be named, he said.

Gates did not take questions.

Gates has no specific candidates in mind for the Army secretary position at this point, Whitman said, but will begin the search immediately.

Gates spoke about the fallout from reports about conditions at Walter Reed, particularly those at Building 18, a former hotel off-post where some wounded soldiers were living in rooms with black mold on the walls and evidence of rodents.

&#8220;I am disappointed that some in the Army have not adequately appreciated the seriousness of the situation pertaining to outpatient care at Walter Reed,&#8221; Gates told reporters. &#8220;Some have shown too much defensiveness, and have not shown enough commitment to digging in and addressing the problems.&#8221;

Weightman&#8217;s temporary replacement, Lt. Gen. Kevin Kiley, the Army&#8217;s surgeon general who had been commander of the facility until 2004, had told reporters that the Washington Post series that sparked the Walter Reed controversy was a &#8220;one-sided representation.&#8221;

&#8220;While we have some issues here, this is not a horrific, catastrophic failure at Walter Reed,&#8221; Kiley said during a session with reporters last week.

Gates on Friday said: &#8220;I am concerned that some do not understand the need to communicate to the wounded and their families that we have no higher priority than their care, and that addressing their concerns about the quality of their outpatient experience is critically important. Our wounded soldiers and their families have sacrificed much, and they deserve they best we can offer.&#8221;

Gates also said the problems at Walter Reed &#8220;appear to be problems of leadership,&#8221; not staff-based.

&#8220;I want to reaffirm my confidence in the staff at Walter Reed and their professionalism and dedication to providing caring treatment,&#8221; he said.

Gates asked Harvey to resign his post after Harvey named Kiley as Weightman&#8217;s successor, a defense official confirmed later Friday. Gates was not informed of Harvey&#8217;s choice of Kiley to run Walter Reed, the official said, and the selection did not please the new defense secretary.

Harvey got the axe rather than Kiley because while Kiley&#8217;s comments about the situation at Walter Reed might have been poorly chosen, as the Army&#8217;s surgeon general he is not directly responsible for the day-to-day governing of the hospital, the official said.

It will be up to the independent review group Gates has assembled to study the Walter Reed situation to decide whether Kiley bears responsibility for the problems, and if so, what his punishment should be, the official said.

That nine-member group, which is headed by Togo West, former secretary of Veteran&#8217;s Affairs and Army secretary under President Clinton, held its first meeting at the Pentagon on Thursday afternoon. It has 45 days to investigate conditions at Walter Reed and the National Naval Medical Center at Bethesda, Md., and report back to Gates and Assistant Secretary of Defense for Health Affairs William Winkenwerder with its findings, Whitman said.

The Associated Press contributed to this report