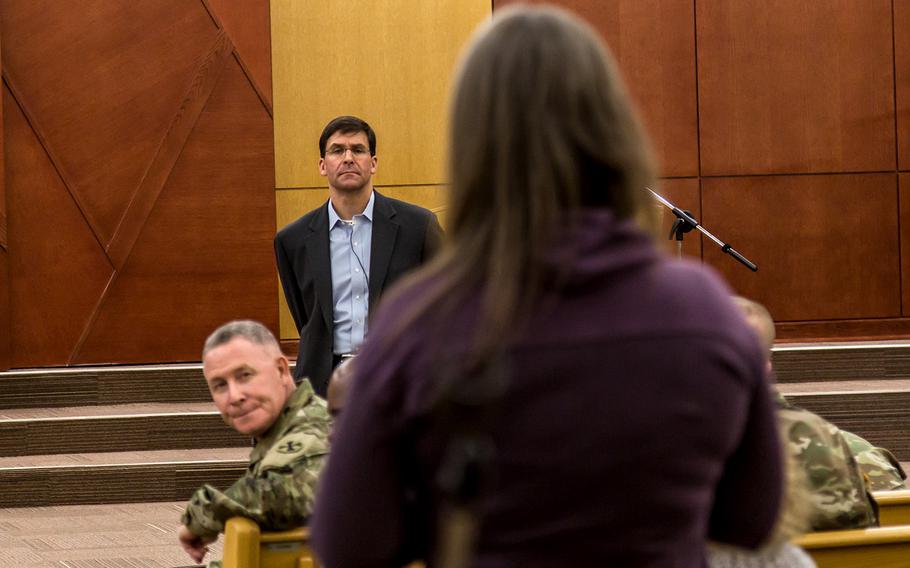 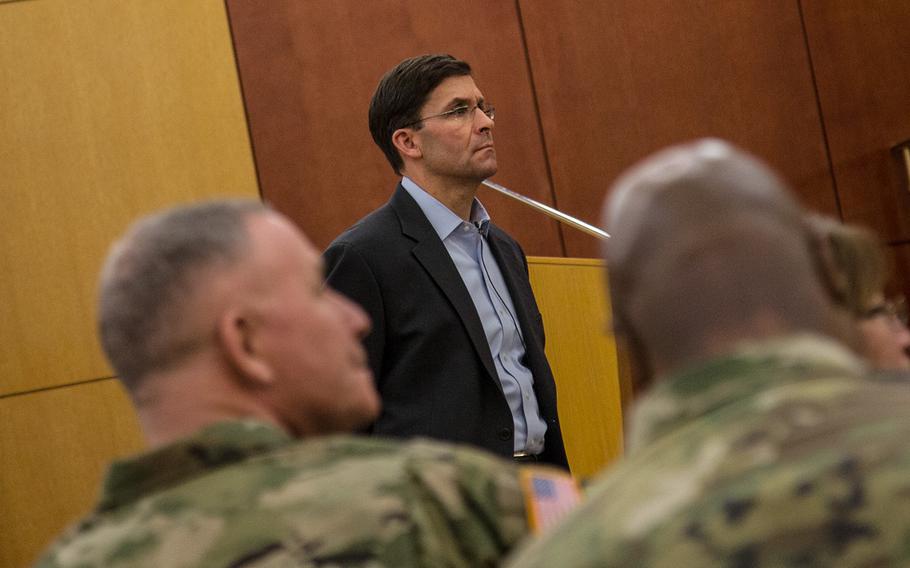 CAMP HUMPHREYS, South Korea — Soldiers won’t have to move as often, spouses will find it easier to get jobs and there will be access to cheaper produce if the new Army secretary has his way.

Secretary of the Army Mark Esper addressed these issues with soldiers, civilians and family members during a town hall meeting this week at the 8th Army’s new headquarters south of Seoul.

Esper — a Gulf War veteran and former Raytheon lobbyist who took the Army’s top job in November — said he hopes to give troops the choice of staying longer at duty stations.

“You should not be penalized by what the Army needs you to do,” he told troops gathered at Camp Humphreys’ Freedom Chapel. “It’s the complete opposite of what we should be doing.”

Dependents at the meeting said they felt penalized by six-month waits for background checks needed to work at on-post schools and child development centers.

That can be a problem for families’ finances and makes it tough to staff services at Humphreys, which has increased in population from 12,000 to 26,000 and will soon be home to more than 40,000 personnel.

“It all improves the quality of life you and your family members experience,” said Esper, who told the Military Times in December that soldiers should be able to stay at a duty station for up to six years.

Some at the meeting complained about high grocery prices at on-post commissaries and a rule limiting families to a single vehicle that they say discourages people from shopping at local markets.

However, Korea Defense Commissary Agency chief Wayne Walk told them that on-post prices are as low as they can go. The commissary’s requirement is to maintain a 30 percent average savings on produce, he said at the meeting.

However, Walk conceded that commissaries set prices based on local brick-and-mortar stores — not open-air markets where produce can be found much cheaper.

“I don’t know if it’s possible, but I’m just trying to use common sense” he said.

Col. Scott Mueller, Humphreys’ commander, suggested that such a solution may be in the works. He told those in attendance that the Pyeongtaek mayor’s office had recently asked about allowing local grocers to sell on base.