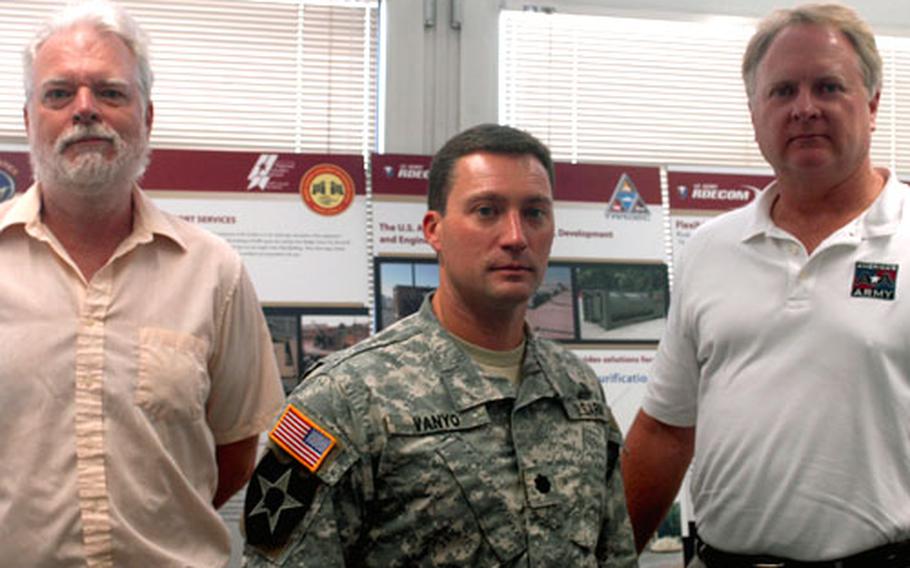 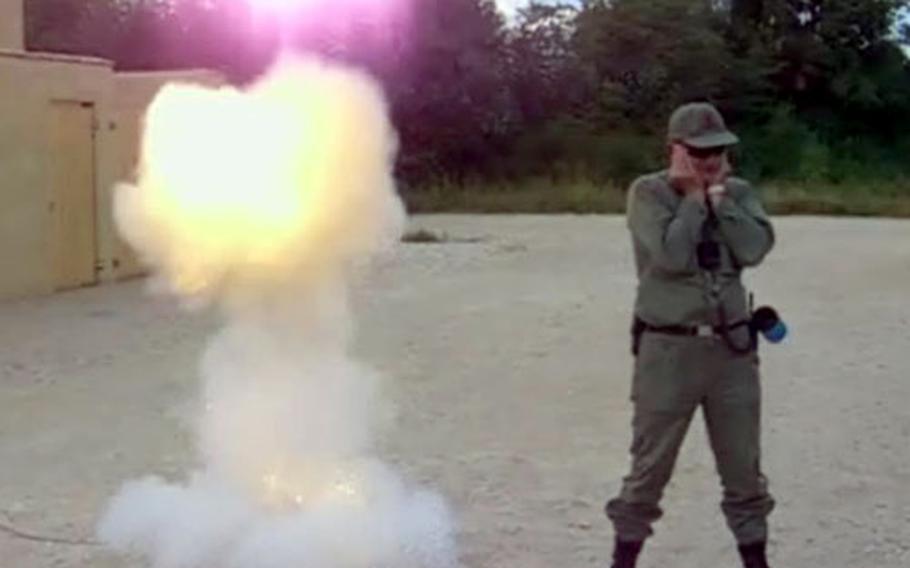 At the Joint Multinational Readiness Center at Hohenfels, Germany, a range pyrotechnician demonstrates the safety of an IED pyrotechnics prototype being considered to provide more realistic training. (U.S. Army photo)

HEIDELBERG, Germany &#8212; The targets had problems, a major noticed. They were OK in bright light but during simulated night raids, the plastic torsos in Hohenfels&#8217; training shoot-houses did not show up under infrared night-vision scopes.

"Is it a woman holding a baby? Or an insurgent holding an AK-47?" said Bruce Sterling, science adviser for the Joint Multinational Readiness Center.

Problem noted, and possibly solved. Later this month, nine platoons training for their next Iraq deployment will be testing out "Heated Manikin Targets" that do show up under infrared. A prototype was completed last month.

The simulated bombs had problems, a colonel noticed. They were so underwhelming, sometimes soldiers just kept on driving.

"It wasn&#8217;t powerful enough, loud enough and it didn&#8217;t provide a lasting signature &#8212; five minutes of smoke," said Kelly McGuire, V Corps science adviser, and it was especially pitiful when attempting to simulate a bomb-rigged house, the latest threat in Iraq.

So last month, two commercially available "IED (improvised explosive devices) Simulator Pyrotechnics" were demonstrated at Hohenfels. JMRC leaders liked one of them &#8212; loud, smoky, safe and environmentally friendly, according to the advisers. Problem potentially solved, although not yet funded.

The new target and pyrotechnics are examples of the way the Army&#8217;s science adviser program is supposed to work &#8212; from the bottom up, fixing problems and filling gaps in equipment.

"That&#8217;s ideally how the program should work: &#8216;This is something I need,&#8217;" said Lt. Col. Kevin Vanyo, a U.S. Army Europe science adviser. "We&#8217;re supposed to be a liaison between commands and Army research center and labs. We talk to users on the ground, if soldiers identify a problem, we go back to the labs."

Some 18,000 engineers and scientists working at the labs all over the U.S. appreciate the input, McGuire said. "A lot of our engineers wearing pocket protectors don&#8217;t understand how a soldier operates," he said.

Among the program&#8217;s biggest successes over the past few years are collapsible gun stocks that make it easier to get out of a Humvee, and D-rings for Humvee doors that make it possible to escape the vehicle if it&#8217;s damaged by a bomb and the door won&#8217;t open. The rings allow another Humvee to yank the door off, McGuire said.

The advisers will be watching later this month when the heated targets are tested, but they&#8217;re most excited about a snazzy new 3-D map.

The "Tactical Digital Hologram," 2 feet by 3 feet in size, looks like X-ray film until you add a light source, such as sunlight or flashlight. Then you get a detailed, textured view of the terrain based on satellite imagery data. "The buildings pop up. It&#8217;s like you&#8217;re on a magic carpet," said Richard Helfman, a USAREUR science adviser. "You get to see the geography, points where you can be seen, points where you can&#8217;t be seen. There&#8217;s a wow factor."

Vanyo heard about the maps from another engineer in a class he was taking, and learned there were already 1,000 of them being used in Iraq. But the Germany training areas didn&#8217;t have any. "Soldiers didn&#8217;t have an opportunity to see it, touch it, train on it," Vanyo said.

Intelligence officers will primarily be the ones testing 10 of the maps.

"We want to give our guys a technological edge, so we can reach out and touch the bad guys before they touch us," McGuire said.

Some of the innovations get funded in limited quantities. The goal for a good product, though, is to get it up to the Army&#8217;s Training and Doctrine Command for standard issue. "Unfortunately, that takes a long time," McGuire said.

And sometimes, new technology becomes outdated by other new technology. USAREUR soldiers recently tested a shoulder pocket to be attached to body armor to provide more stability and better accuracy for firing M-16s and M-4s. But the body armor had changed, and the straps on the prototype were too short.

Now the Soldier Research, Development and Engineering Center in Massachusetts is working on a new prototype, with longer straps.